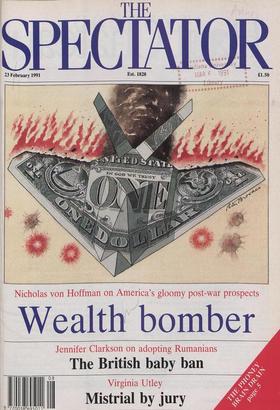 'Is that all you think about — money?' I RA bombs exploded at Victoria and Paddington stations in London, after a telephone warning in which an outdated password was used. One...

How not to build sandcastles in the air NOEL MALCOLM E very time an IRA atrocity is commit- ted, any attempt to treat it as a rational political act can only seem like an...

The hair-raising history of Charles the Bald CHARLES MOORE W e in the editorial community, as I am surprised no one yet calls it, have endless discussions about why people...

Nicholas von Hoffman warns of the economic disaster facing the United States when the war is out of the way New York AMERICA is walking on eggs, thoughts of the future in...

John Simpson on un-British attempts to muzzle reporting of the Gulf war SOMETHING moved in the darkness: a shadow, succeeded by another and then by a whole group of shadows....

William Dalrymple on why the Iraqi dictator is the most popular pin-up in India New Delhi SYED Ferid Khan — small, balding, shabbily dressed, a look of mediaeval puzzlement on...

LOCKING OUT THE ORPHANS

Jennifer Clarkson on the British obstruction of her attempts to adopt a young Rumanian WE HAVE just adopted and brought home a child from Rumania. Our daughter is wonderful,...

A reader received the following letter. Sir: Although we have yet to meet. I feel like I can confide in you the valuable information that my company has complied to enable us...

I WAS on prison duty last weekend. There wasn't much medical work to be done, but the strange thing about prison is that the number of forms one has to sign remains constant,...

Jeremy Pulley experiences prejudice against employing people who are middle-aged IF YOU are a middle-aged man, you are in your prime. Your mid-life crisis is behind you, and...

JURY IN THE DOCK

Sandra Barwick revisits her old school, which has gone through several educational revolutions ST AIDAN'S school in Carlisle still smells much as it did. The assembly hall is...

The media: Paul Johnson thinks voices a key to good broadcasting TELEVISION is a visual medium but the element of sound in conveying its message should not be forgotten, as it...

A MUTED 20th birthday party for our decimal currency. At the Daily Telegraph, the anniversary was marked by increasing the price from seven shillings a copy to eight. On the eve...

I WONDER how the dollar can live down to the expectations of Bluford Putnam, chief economist of Kleinwort Benson. He sends me his review of the markets, headed: 'Dollar defining...

Poll tax: my modest proposal for curing fiscal myxomatosis CHRISTOPHER FILD ES W hat we need now, and what I now propose, is a cure for the poll tax. The Heseltine...

Pay as you choose

NO RATES, no poll tax, no local taxes at all — what a good idea, and why didn't we think of it earlier? It would do wonders for inflation, as measured by the Retail Prices...

THE man who got it right was John de Loynes of the Bank of England. While his colleagues were busily making our curren- cy decimal, he was advising The Gambia to set up its...

Sir: Congratulations on your splendid lead- ing article ('Who made them homeless?', 16 February). However, while the Rent Acts were indeed stiffened in response to the...

Sir: Paul Johnson was quite right to chide me in

the press column last week for not heckling a priest in church who subjected the congregation to a pacifist sermon. I can, however, plead extenuating circum- stances. I was...

Sir: Congratulations to Paul Johnson for suggesting, at last, that

right-thinking Christians such as himself should stand up to the 'pacifist ideology and anti-British abuse' of certain sections of the clergy. However, I feel that he does not...

understand the article correctly, Mr Johnson is calling for an 'organisation of sensible people' to haran- gue and interrupt anti-Gulf war opponents in churches, theatres and...

Sir: I can well understand Paul Johnson's annoyance (The media, 16 February) at the report that a Christian priest addressed the moral problem of the Gulf war in his homily on...

Sir: Having just read Noel Malcolm's article ('Margaret Thatcher: the silent years', 16 February), I have not seen so many misprints since I used to read the Guardian. But even...

Sir: In her letter (9 February) Alexandra Artley asks, 'What is the Thomas Coram Foundation for?' She mentions only our work with the under fives, but perhaps she should refresh...

Sir: As always, Christopher Fildes recog- nises the realities of owner-occupied capi- talism (City and Suburban, 9 February) by arguing that companies should pay out all their...

Sir: In his very kind review of my book (2 February) John Henshall makes the some- what embarrassing mistake of describing me as a psychiatrist. I am not, and make no claims to...

Sir: I quite understand that John Simpson is not in regular touch with the woman he calls his 'ex-wife' ('Worse than Saddam', 9 February). The Daily Mail Diary contacted Mrs...

Sir: Whether Waugh on war is wrong or not, W.F. White (Letters, 2 February) is not right to assume the school Officer Training Corps limited Auberon's experi- ence. Who has not...

Little Mr Edward Mark Amory F or a man who achieved little, Edward James is much discussed. There is another book besides these three (Swans Reflecting Elephants by James...

The don in Grub Street

Stephen Logan THE USES OF ERROR by Frank Kermode Collins, £18, pp. 432 F ees for literary journalism have drop- ped and it is no longer possible to earn a living by doing it...

The view from Cookham

Bryan Robertson STANLEY SPENCER: A BIOGRAPHY by Kenneth Pople Collins, £25, pp. 576 T he life and work of Stanley Spencer, who died in 1959, must have served as an almost...

Stephen Spender ABOUT TURN edited by Francis King and George Matthews Lawrence &Wishart, £34.95, pp. 318 T his is the transcript of the highly acrimonious debate which took...

Architecture The well- tailored building Alan Powers on why the best British architects have to go abroad to build A rchitecture is a matter of economics. Budget and time...

White Chameleon (Cottesloe) Colonial boy Christopher Edwards hristopher Hampton has written an engaging new play set in Egypt in the Fifties. Many of the details are autobio-...

Dutch treat Robin Holloway M y first experience of the great Continental concert halls London so woe- fully lacks was a visit to the Amsterdam Concertgebouw for an...

The Field ('12', Curzon West End) Heavily underlined Gabriele Annan T he Field is an Irish film produced by Noel Pearson and written and directed by Jim Sheridan. These two...

Max Ernst (Tate Gallery, till 21 April) Icons for the unimaginative Giles Auty A nattier centenary this week, not of a collector this time but of a leading Surrealist. The...

Lean season Alistair McAlpine L ondon has seemed a very dull place in the last month. War and recession apart, tourists have never flocked to London in January and the native...

Smoke signals Taki J ohn McCone, ex-head of the CIA, cold warrior par excellence and a friend of my father's, was also a good story-teller. While Pope John XXIII lay dying in...

Love and money Martyn Harris A t 102 Boulevard Haussman (BBC 2, 9.05 p.m., Sunday), Marcel Proust is con- fined by illness to his cork-lined room and waited upon by the...

. . . and snail soup Zenga Longmore I t was astonishing to discover what a nonentity I became when I ventured forth alone, without a child. Since the birth of Omalara, I have...

Cucumber sandwiches . . . Jeffrey Bernard I t is so awful here that I sometimes think dying will be like going on holiday. The dry-cleaners keep stealing my shirts, the local...

JL SINCE going to the pre-Lent Cadiz carniv- al, I have been trying to work out what readers of this column should do in the way of self-discipline. The carnival itself con-...

lana Jaspistos 12 YEAR OLD I SCOTCH WHISKY n Competition No. 1664 you were in - vited to supply an extract from a review of a musical dealing grotesquely and fanciful - ly...

Candidates Raymond Keene W hile our attention has been concen - trated on Nigel Short ' s epic match against Jon Speelman, other matches around the world have been determining...

Last week we were amazed to learn from the newspapers that tranquillisers can in- crease aggression, and that men who drink milk are less likely to have heart attacks. Will next...

A first prize of 120 and two further prizes of £10 (or, for UK solvers, a copy of Chambers English Dictionary — ring the word 'Dictionary') for the first three correct solutions...

Stuck up stylites Frank Keating IT WAS with astonished delight on Sunday that I spied a Wisden on the bookshelves which were background to the pinstriped portrait of Auberon...