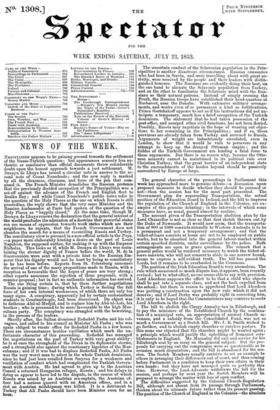 The general character of the proceedings in Parliament this week

has approached more to genuine debateâa discussion upon proposed measures to decide whether they should be pursued or notâthan the session has for the most part presented....

NEGOTIATION appears to be gaining ground towards the settlement of the Russo-Turkish question ; but appearances scarcely less au- thentic or conclusive than official documents...

The uncertain conduct of the Selavonian population in the Prin-

cipalities is another disastrous circumstance. Russian emissaries who had been in Servia, and were travelling about with great ac- tivity, were received by the people and their...

At last something like authentic information is furnished re- specting

the rebels in China. Sir George Bonham and Mr. Meadows, an official interpreter, have actually seen and con- versed with some of them, and have ascertained from their language...

Out of Parliament, Colonial affairs have occupied a prominent at-

tention; for two public dinners, of a rather remarkable character, have been devoted to the service of the Colonies. The return of Mr. I. R. Godley from his mission in founding...

UNHAPPILY, we have nothing to record this week but the illness of the Queen an j d unior members of the Royal Family. It is believed that her Majesty had sickened of the...

An assemblage of unusual interest took place on Wednesday, at the Trafalgar Hotel, Greenwich, to welcome Mr. J. R. Godley on his return from founding the Canterbury Settlement...

The new regiments have had to endure some of the sterner realities of camp life. The vast quantity of rain that fell on Friday and Saturday rendered Chobham Common little better...

The election for the seat in West Cornwall, vacated by the death of Mr. Pendarves, took place on Tuesday ; when Mr. Michael 'Williams, of Trewince, was returned without...

The Dublin Exhibition is now attended by nearly 10,000 visitors daily, including a share of the Irish aristocracy. Its success is therefore no longer doubtful. Sir Joseph...

FRANCE. â The Honiteur of Sunday published the reply of the French Minister for Foreign Affairs to the second circular of Count Nesselrode. It is in the form of a circular...

Mr. Barkly, the new Governor of Jamaica, is to be knighted, with the decoration of a Civil Knight Commander of the Order of the Bath. Mr. John Robert Godley has been appointed...

SATURDAY. Again, last night, the business of Friday in Parliament has been marked by variety and importance ; and on one subject the debate assumed the character of a party...

The spirit of the news respecting the East cannot be

better expressed than in the following lines, the text of a telegraphic despatch in the Horning Post. "St. Petersburg, July 15. â The propositions made by the Great Powers...

The rumour that the Queen will visit Ireland, immediately after

a grand review of the fleet at Spithead, is again somewhat confidently stated. The South Dublin Union have passed a resolution of "want of confi- dence" in the Educational...

STOCK EXCHANGE. FETDAT AFTERNOON. Confidence in an early adjustment of the Turkish question has this week prevailed to some extent., causing an advance in the Funds hereand in...

"Everything happens in France !" exclaimed the famous Duke de la Rouchefoucauld, when after one of the squabbles of the Fronde he found himself riding amicably in the same...

Rumours are current among musical people that Drury Lane will

be once more opened next season as an English operahouse ; and they seem to receive countenance from the operatic character,of a performance in that theatre, on Wednesday, for...

Spohr came to London this season with two objects,âto superintend

the production of .Tessonda at Covent Garden, and to conduct the last two concerts of the New Philharmonic Society. He conducted the concerts; but he has departed leaving his...

If the elevation of the Olympic is a positive phrenomenon,

we have a negative phrenomenon in the closing of the Haymarketâonce called the Summer Theatreâin the middle of July. Mr. Buckstone, in his con- cluding speech, told his...

With a due exercise of fancy, the tragedy of Sardanapalus

might have been very effectively burlesqued; and the barbarous sublimities dis- covered by Mr. Layard might have been regarded from a point of view which would have given scope...

The reputation of the German company rests at present on

the Wil- helm Tell. Next week we are promised Fleece and Die Brant von Mes- sina, both new to this country ; so that the deficiencies of the earlier programmes will be in a...

The innumerable benefit concerts of the season seldom present any-

thing worthy of notice, but there was one this week which may bo re- garded as an exception. This was a concert for the benefit of M. Lich- tenstein, an Hungarian refugee, 'at...

SKETCH OF THE STATE OF LEGISLATIVE BUSINESS On Saturday, July

TITE object of augmenting the maritime power of France, especially against the ascendancy of this country, is steadily pursued by all who have taken a part in the direction of...

NEVER was the mutability of our climate more strikingly exempli- fied than it has been for any time since this Midsummer twelve- month. Every burst of sunshine, or every breath...

THE SESSION. THAT the Parliamentary session must needs extend beyond the average limit, might have been inferred from the materials sup- plied by Mr. Gladstone's Budget speech....

TIM latest accounts from Sydney present an anomalous state of trade, which is not peculiar to that town, but has been observed be- fore in Melbourne, and in a very minor degree...

OBJECTIONS CONSIDERED. THE scheme of representation, the principle of which we indicated last week, is exposed to many obvious objections, and must upon the whole show a...

PRosrEfury and profligacy would seem to go together ; and as misery and vice are inseparably associated, we are driven to the painful conclusion, that, prosperous or wretched,...

Acconnrxo to the latest official announcement, transportation is not to be quite discontinued. From what the Duke of Newcastle stated in Parliament, we were led to suppose, that...

REPRESENTATION BY CLASSES. Kineweston domes-Ion, 2011; July. Sin â The imitations of the English constitution have generally gone be- yond it in the direction of universal...

SinâTours has been one of the few papers which have treated the case of the West India proprietary with ordinary impartiality ; hence I am induced to request the insertion of...

1 Adam Street, Addphi, 1911s July 18453. SinâSome years since I was travelling through the region known as the Despoblado, or "the uninhabited," situated on the Southern...

On the 18th June, at Jerusalem, the Wife of the Rev. H. Crawford, of a son, still- born. On the 10th July, in Lansdowne Place, Brighton, the Baroness de Linden, of a daughter....

For BOOKS, see the first six pages of the accompanying

HEALTH OF LONDON DURING THE WEEK ENDING JULY 16.

London: Printed by Stases Czarrox ' of 320, in the Strand.

County of Middlesex Printer, at the office of Jossrn MATTO,. ' No. 10, Crane Court, In the Parish of St. Dun- stan.. in the West, in the City of London; and Published by the...

THE CASTLEREA.GH CORRESPONDENCE.' THERE is much that is formal and much that is trivial in these four volumes ; and the reader is sometimes left, as a musician would say, with...

HOOPER'S TEN MONTHS AMONG THE TENTS OF

THE TIISKL a THE expedition in which lieutenant Hooper embarked was con- nected with the voyage of the Herald in search of Sir John Frank- lin from the direction of Behring's...

GOSSE'S NATURALIST'S RAMBLES. * THESE rambles on the coast of Devonshire

in search of sea-weeds, zoOphytes, and analogous things, with the discoveries and experi- ments of the author thereupon, have not perhaps the splendour or the interest of Mr....

Booms. â¢ THE influx of publications, which last week slackened considerably, would seem to have revived somewhat The most interesting of the reserved pub- lications, Lord...

RUSKIN'S STONES OF VENICE.* FROM "The Foundations," which gave a name to the first volume of the " Stones of Venice," we pass in this to "The Sea-Stories,"âa title to which,...

NOTE ON THE REVIEW OF THE ELEVENTH VOLUME OF GROTE'S

HISTORY OF GREECE. In a recent notice of his eleventh volume, we expressed surprise that Mr. Grote had quoted the so-called Platonic Epistles as genuine, without alluding to...

HAT ON THE PARTHENON.*

The two fundamental positions of the harmonic law which Mr. Hay applies to the human body, and to all the formative arts, and of which we have already spoken more than once,...

We have alluded to the exclamation, "How like D******* !" made by a distinguished visitor to the two curiosities exhibited at the Hanover Square Rooms under the designation of...