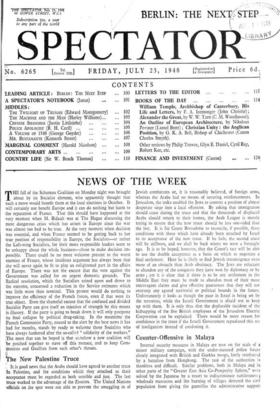 T HE fall of the Schuman Coalition on Monday night was brought about by its Socialist element, who apparently thought that such a move would benefit them at the local elections...

T he New Palestine Truce It is good news that the

Arabs should have agreed to another truce In Palestine, and the conditions which they attached to their acceptance must be regarded as both sensible and just. The last Mice...

Internal security measures in Malaya are now on the scale of a minor military campaign, with the under-manned police forces closely integrated with British and Gurkha troops,...

Decline of the Tudors

It was inevitable that the Tudor II aircraft, with its variant the Tudor V, should be abandoned after the publication of the second Courtney Report, with its dismal tale of...

The Price of Coal

The size of Lord Hyndley's " promising surplus " achieved by the Coal Board in the first quarter of 1948 was duly announced on Monday. It was half a million pounds. Just what...

After the rejection by the Lords of the new compromise provision on capital punishment it seems clear _that the whole question will have to be dropped for the moment. The...

The reports now being made by the investigating commission set up by the Council of Foreign Ministers to consider the future of the former Italian colonies in Africa may or may...

On the whole the National Health Service appears to be making a good beginning, and it is encouraging that a start is to be made on building a large health centre, which will be...

It is not necessary to be a Pravda leader-writer to suspect that there is more behind the visit of the Shah of Persia than is allowed to meet the eye. The ostensible reason for...

M R. JOSEPH WESTWOOD, who was killed in a motor accident over the week-end, was one of that little band of very small men on the Labour benches—Mr. Tomlinson, Mr. Silverman and...

BERLIN : THE NEXT STEP

HE situation at Berlin remains static. That it can remain T static indefinitely is impossible. It must be resolved or grow gravely worse. By what means can the latter disaster...

Lord's was a strange sight in the latter part of

Monday afternoon. At least it was strange to me, who am about a one-day-a-year observer of cricket. The strangeness was created by Lindwall, who bowls with the tort of speed...

Lord Altrincham's suggestion, at the annual meeting of the London

Library, that to find a parallel with Mr. Churchill as man of action and man of letters you need to go back to Julius Caesar, is challenging, but I admit I have at the moment no...

It needs a good deal of optimism to foresee that

a movement to persuade people to read Hansard will grow into a society competent to popularise Parliament generally, in the sense of familiarising the common voter with the...

There is really a lot to be said for Babel,

In referring last week to the elevation of Nottingham University

College to University rank I gave the number of students at Nottingham as 1,200. The figure was taken from the latest statistical return of the University Grants Committee,...

The interest people in general are displaying in the new

National , Insurance provisions is remarkable. From the appointed day, July 5th, enquiries, I am told, have been pouring in in incredible volume. It might be supposed that...

T HE publication of the Dean of Lichfield's William Temple, which I have just finished reading, is an event of the first importance. The book is, I know, reviewed in another...

THE TWILIGHT OF TRUMAN

By EDWARD MONTGOMERY H ARRY S. TRUMAN won his fight with his opponents in the Democratic Party for the Presidential nomination, and in so doing signed his own and his party's...

THE MACHINE AND THE MAN

By HARLEY WILLIAMS D OES the machine count for more than the man who made it ? Less, I believe, much less. The man and his soul is much more powerful, more significant, yet we...

By JUSTIN LITTLEJOHN T HROUGHOUT the whole of the last century Shanghai never enjoyed anything but a somewhat evil reputation, but to those who lived and worked in Shanghai...

By R. H. CECIL "H ISTORY may be used to support any conclusion," wrote Lowes Dickinson, "according to the emphasis of our conscious or unconscious principle of selection." The...

By GEORGE GOYDER T HE gathering of Bishops now in progress at Lambeth is certain to be a significant occasion. In a quiet room in a side-street across the Thames another...

By KENNETH STREET F OR ten years one figure has dominated the Jamaican political and labour scene. Governors have come and gone ; rivals in both spheres have appeared and...

By HAROLD NICOLSON I T has not been easy during this past week to keep one's mind away from Berlin. The name of that sinister and tragic capital has formed a sombre rhythm,...

THE THEA FRE " Written for a Lady." By Leo Marks. (Garrick.) Tors is a bad play. Bad plays, like bad human beings or even bad horses, generally have some redeeming streak...

GLYNDEBOURNE'S four-day festival of Mozart's orchestral and chamber music opened on July 14th with an afternoon lecture on the composer by Sir Thomas Beecham, who also conducted...

Staying almost on the banks of the Wye, that dancing river, I desired to walk beside it, but the difficulties, whether up or down, were almost insurmountable. Apart from other...

Butterfly Hosts The other day I saw (for the first

time) a considerable number of the caterpillars of the swallowtail butterfly feeding on their proper plant. This glorious butterfly has increased greatly of late years. Last...

Field Studies A little function is to be celebrated on

July 23rd which should interest a wide circle of artists, naturalists et hoc genus omne. Flatford Mill, where Constable was miller's boy, is to be formally opened as the first...

IT is not clear to me why art and sport should be so antipathetic in the middle of the twentieth century. Partly, perhaps, it is the fear in subtle minds of windy rhetoric, for...

IT is fatally easy to indulge in superlatives, but I cannot find a less extreme form of words to describe this year's harvest. In Norfolk I walked by a narrow path through a...

In the Garden Insistent pleas for roses grown on their

own roots (as being longer lived and free from suckers) continue to be totally disregarded by nursery- men. This is natural enough in regard to the best bedding roses (say, the...

THE IMPLICATIONS OF NUREMBERG SrR,—As the international situation deteriorates and the accusation of aggression begins once more to be bandied about among the nations, we can...

NATIONALISTS AND NATIVES IN S. AFRICA

Sut,—The result of the recent general election in South Africa seems to have come as a surprise in England. But if all the facts behind the political scene here today had been...

Sra,—Lord Montgomery's speech to the Mother's Union last week, in which he declared that the youth of today have " no sure standards or principles by which to regulate their...

Nunburnholme, in her letter advocating the admission of women to the priesthood, has given proof that the Church of England has in many cases failed to teach the faith it pro-...

WOMEN IN THE PRIESTHOOD

SIR, —China is not the only country that is realising the necessity for the admission of women to the priesthood. This step was recently legalised by an Act of Parliament in...

SIR,—As the father of a conscripted son I should like

to endorse the complaint of " Gunner." My son, a promising art student, was called up for the Navy last August after completing 18 months of a three-year scholarship. He did his...

SIR,—Mr. Arthur V. Barber must know that I was referring, as in the case of the Post Office, to the marked deterioration in the service of banking employees to what used to be...

Snt,—Mr. Kenneth Lindsay tells us that " the total programme of U.N.E.S.C.O. is still too diffuse" and is not " capable of being under- stood by the man in the street." I have...

SIR,—As a missionary of lifetime service in the Hyderabad State may I express my hearty acquiescence with the point of view of Mr. Woodruff's article in your issue of July 9th....

THE COMMONWEALTH AND THE LORDS

StR,—Any opinion on the proposed reform of the House of Lords not backed by political experience and an intimate knowledge of England's domestic troubles is, I know, worth very...

NO ORCHIDS FOR OLIVER TWIST

Sig,—As an American enjoying—really enjoying—English hospitality this summer, it has interested me to read on every side the attacks made by English critics on the physical...

Sm,—The Minister has affirmed that our food amounts to 2,800 calories per day. Can any of your readers explain for ignoramuses, such as the writer, how this figure is arrived at...

SIR,—In these columns last week F. R. Barratt seeks an explanation for the apparent contradiction between David Gunston's "whales . . have no vocal cords," and Masefield's...

Man and Archbishop Tins life of William Temple; long expected, is worthy, as far as any book could be, of its great subject ; its gigantic subject, one feels inclined to say as...

"MR. Tarn's monumental work on Alexander the Great is presented in two volumes, which can be bought separately. It is not to be recommended that they should be ; but probably...

Focus FOUR is a miscellany which, like others of its kind, contains poetry, criticism and a short story. But the greater part is given over to what the editor calls a symposium,...

Christian Unity : the Anglican Position. By G. K. A. Bell, Bishop of Chichester. (Hodder and Stoughton. 6s.) IT is instructive, as it is inevitable, to compare the lectures...

The Architecture of Europe

An Outline of European Architecture. By Nikolaus Pevsner. (Murray. 25s.) ONE of the problems of writing a short general history of architec- ture is to fix the boundaries. To...

Merlin's Island. Essays on Britain in the Dark Ages. By T. C. Lethbridge. (Methuen. 10s. 6d.) HERE is a book to be read by everyone interested in the ancient history and...

A Corner of China

China Changed My Mind. By David Morris. (Cassell. 8s. 6d.) THE title of this excellent book needs explanation. Mr. Morris, after the usual kind of passage through a public...

Blood Money. By Edward Hyams. (The Bodley Head. 8s. 6d.) THE human icebergs move haphazardly and noisily across the waters. Occasionally there is a crash—a ship, another...

By CUSTOS Au, things considered, the London Stock Exchange has acquitted itself well in this week's trials and tribulations. Prices have fallen and there have been bouts of...

The Sahibs. By Hilton Brown. (Hodge. 15s.) DEI.mtIs KINCAID'S British Social Life in India was a just and urbane study of a subject which, in its raw state, is capable of...

for one guinea will be awarded to the sender of the first correct solution of this week's crossword to be opened after noon on Tuesday week August 3rd. Envelopes must be...

SOLUTION TO CROSSWORD No. 485