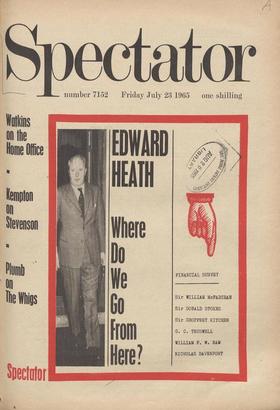 — Portrait of the Week PICTURES OF MARS, transmitted from America's

probing spacecraft, suggested a planet of in- timidating emptiness: here below, crowded con- fusion proceeded as usual. The crew of an American reconnaissance aircraft found it...

'One of the most serious effects of the Vietnam crisis is that it has put an end for all practical purposes to any serious dialogue between the Soviet Union and the West—...

Trouble on the Line MAURICE. GENT writes: When before the election Mr. Wilson was all agog with the wonders of the technological revo- lution and spoke so enthusiastically...

Ena Ena Tessara MICHAEL LLEWELLYN-SMITH writes : The streets of Athens have been ringing once again to cries of Ena Ena Tessara (114, the article of the Constitution which...

The Eccentrics DEV MURARKA writes from Moscow: Slapstick comedy has never been a strong point of the Soviet cinema. It is not totally absent, but the tradition is a weak one...

All Got Up by the Press? C HRISTOPHER BOOKER writes : Their first reward came on Sunday, June 27 --t he day after the Prime Minister's announce- ment at Glasgow that there...

The Home Office Muddle By ALAN WATKINS PARTICULARLY against books the Home Secre- r tary is,' observes the customs officer in Vile Bodies before committing the manuscript of...

I have never known anything quite so dull As the Mogul. Nothing in the world is less attractive than The `company man.' I have no wish to spoil The fun of the bores who bore...

The Fighter Little doubt, I think, that the dramatic career

of Dr. Syngman Rhee, who died in Honolulu this week at the age of ninety, was one of the most turbulent of the twentieth century. It is sad that Rhee died in virtual exile from...

Members of Parliament are sadly superficial. His pamphlet however becomes hilarious because—at least in my copy—two pages are misplaced. Accordingly the personal characteristics...

riloudirr I would write something nice about the Prime Minister this week. I have not perhaps always been as generous as I might have from to him, and I have had a letter (one...

Gus Air-Marshal Sir Augustus Walker is to be the next

President of the Rugby Union, and a very popular one he will be. No one will lose more gracefully to us at Murrayfield next March. My favourite rugger boast is that once I...

of ten MPs . marched away from the sound ,, gunfire to vote in favour of Mr. Cousin's T a stery of technology. The next day when it was , question of voting against the...

a dozen years in the Blues before entering Parliament in 1945. Now he has written, or rather rewritten, for his book first appeared in 1951, an enthralling account of the...

Forward from Gothic It is not easy to become enthusiastic

about a piece of town planning which, it is said, may take fifty years to complete. Still, the plan for rede- veloping Whitehall and Parliament Square de- serves a general...

By COLLINGWOOD AUGUST T m3 hostel Govind used to run for overseas students tame into being mainly through the efforts of Labour party supporters. Govind him- selt—until...

From MURRAY KEMPTON NEW YORK A Lt. of us were young then, young and gay, and so for a while was he. That was thirteen years ago and it lasted only a few months. So the sad...

The Right To Know

By MILES PLAYFAIR N EARLY a decade ago, James Russell Wiggins, editor of the Washington Post, issued a powerful warning against continuing encroach- ment, in this age of...

What Happens to Public Schoolboys?

By JOAN HILLS a N the whole, the public school sixth-forme r Si today does the same as his opposite numbe r e s j at the grammar school; he tries to get to lb ° ,' university,...

By BRIAN BEHAN T AM addicted to swimming; I find it cheaper 'than drink and more relaxing. ,It has long been my delight to go over to our local pool to swim and cavort in the...

Sts,-11 we must spy pruriently and constantly into other people's private lives, whether out of senile jealousy or out of what we believe to, be genuine concern, would it not be...

Abreast of the Age

Six,- --Dr. John Holloway has caused me some anxiety. He says boldly that Matthew Arnold 'was a poet.' This poet. he adds, has 'a rich sense of fact'—in some things, this poet...

SIR; A namesake of mine, Drusilla Scott, writes on sexual

freedom in your issue of July 9. I feel that I am as qualified as she is to write on this subject because I have not read Wayland Young either. But perhaps I have the additional...

The Spectator and the Proms

A Study of Opinion Much interest has been aroused by the announcement of the study of opinion on the Promenade Concerts which the Spectator is undertaking with the...

SIR , , —If your correspondent Leslie Adrian is a woman r e suggestion that her sex is given to nervous col- ° a pse when furnishing a home may not be so 'spuri- a s . a piece...

Gazing at Waterfalls RITA IN and China share an attitude toward' n Do ature, and a feeling for nature poetry an d , descriptive landscape painting, so much alike 11 0 it has...

Pardoner's Tale E gives you confidence,' said the boy pop- 11. star, and then added, 'I really don't know what makes him tick.' The reference was to Jimmy Savile, the...

Moses and Aaron in Tails I F I still go on about Moses and Aaron (an interim last word only), it is because this week's concert version by the Covent Garden company at the...

BOOKS The Good Old Cause

By J. H. PLUMB TN spite of the battering at the hands of 'historiographers as diverse in their attitude to life as Herbert Butterfield and Peter Geyl, the Whig view of English...

Love Respell. By Robert Graves. (Cassell, 50s.) ROB ERT GRAVES is celebrating his seventieth b irthday with the publication of a splendid, l imited, lithographed edition of his...

The Puppeteers. By Harold Soref and Ian Greig. (Tandem Special, 5s.) • INDIGNATION in the name of an abstract prin- ciple is probably rather rare. Most people are indignant...

Halifax. By the Earl of Birkenhead. (Hamish Hamilton, 63s.) THE life and career of Edward Frederick Lindley Wood, first Earl of Halifax, would appear to offer much solid...

The Politics of Repeal. By Kevin B. Nowlan. (Routledge and Kegan Paul, 45s.) D R. NOWLAN collaborated with a substantial essay in the large volume on various aspects of The...

May You Die in Ireland. By Michael Kenyon ' (Crime Club, 16s.) This is a 'natural' for the star of the month. Its quiet offbeat humour is never forced, as Willie Foley, the...

AFTER THE DEBATE Where Do We Go From Here ? By EDWARD HEATH, MP A FrEft 211 hours of debate in twenty-one and a ..half days, the longest and most complex Finance Bill of...

By SIR WILLIAM McFADZEAN• T HE prospects of exports always depend upon three main factors. One is the ability of British manufacturers to produce goods of the right designs, in...

The Future for British Car Exports

By SIR DONALD STOKES* D URING 1964 the total value of exports fjom the motor industry was some £740 million, the biggest single contribution by any one in- dustry to the...

By SIR GEOFFREY KITCHEN* T FIE insurance industry speaks with one voice through the British Insurance Association, but it is by no means a homogeneous business. It divides in...

The Growth of Private Medical Care

By PAUL VAUGHAN nROBABLY close on one and three-quarter r million people are members of a 'shadow' Health Service, subscribing to one of the provi- dent associations and...

By G. C. TRUSWELL" A LONG with many new management tech- niques, equipment leasing is growing in appeal to British companies. Leasing a large por- tion of one's equipment needs...

By WILLIAM F. W. RAM* T EM revolutionary changes in Britain's taxation system this year may well affect our histori- cal role as an exporter of capital to the world. This could...

Why Stock Markets Slump By NICHOLAS DAVENPORT C O far, the only conspicuous success which Mr. Callaghan can claim in his drive to restrain the rise in personal incomes and...

By CUSTOS HE market gave up trying to make sense of I Mr. Callaghan's contradictory remarks. In the House of Commons he said that the credit squeeze was biting and did not need...

By LOTHBURY S IR PHILIP WARTER, chairman of Associated British Pictures, warns shareholders that there will be sonic reduction in profits this year, as the ITA levy will...

The In and Out

By LESLIE ADRIAN This terrible text is called The Drinking Man's Diet, costs five bob and comes from San Fran- cisco. The authors, Gardner Jameson and Elliott Williams, have...

Another Part of the Forest By STRIX MY prowess as a sleeper first attracted attention during Zeppelin raids on London in the First World War. When these started our household...

By ALAN BRIEN This game is rarely played in that raw and bloody manner where I live. (And I hope I need not say that I am against capital punishment of anybody—let alone of...

SOLUTION TO CROSSWORD No. 1179