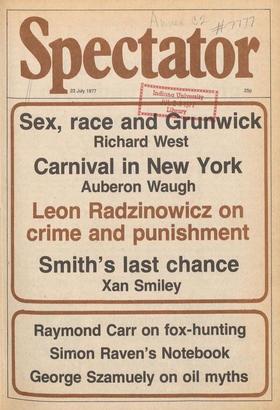 President Giscard d'Estaing has discovered an opportunity for France to re-assert the Gaullist line on foreign policy which finds its origin in profound distrust of the United...

Towards the abyss John Grigg What one might term the choreography of Denis Healey's statement in the House of Commons last Friday was not the least intriguing aspect of it. As...

A cricket team of Young Australians (young equals under nineteen) has just finished a tour of England. Their play has been so proficient and so exciting to watch that several...

Something to celebrate Auberon Waugh It couldn't happen here, we are told by a smug Electricity Council. This is because we have nationalised our electricity supply. We now...

Nicholas von Hoffman Washington It was disconcerting that the White House should leak the news that the United States was now in what an unnamed high official called 'Era 2.'...

Xan Smiley Salisbury A heady concoction of white Rhodesian lunacy and Anglo-American, cowardice now makes the prospects for a settlement look grimmer than ever, The antics of...

Richard West The name of Grunwick is spoken wherever oppressed workers fight for their rights, according to Pravda; and one of the visiting pickets, who had been, arrested, has...

Learning to love the bomb

Julian Critchley What is the neutron bomb? It has been called a 'super capitalist' weapon because its target is people not property, and by Mr Reginald Maudling in a letter to...

George Szarnuely The British National Oil Corporation, created in order to 'secure effective control on behalf of the British people' of the development of North Sea oil is an...

George Gale A free market economy will not work to the general benefit if competition within it is restricted by monopoly. Monopoly distorts the workings of supply and demand...

Second thoughts Nicholas Davenport The Stock Exchange took a cynical view of Mr Healey's remarkable tour de force in the House of Commons. Markets went down although I thought...

Sir: It is refreshing to see a non-orthodox view of foreign aid (How foreign aid makes the world poorer, 25 June), but it strikes lme that all the talk about the Third World has...

Sir: What is your evidence that the 'world largely disbelieves in God'? (Bad News, 16 July). John Biggs-Davison, MP House of Commons, London SW1

Sir: Auberon Waugh will surely find consolation for the intrusion of the pensioners and the retired into his Somersetshire Arcadia in the fact that while we all contributed...

Sir: Opinions may differ as to whether 'alright' is all right but surely there can be no doubt that 'prejudice' is not synonymous with 'opinion', 'belief' or 'conviction'. Yet...

Sir: It was pleasing to see that Peregrine Worsthorne intends to push ahead with a biography of Ian Smith (Notebook, 9 July) .notwithstanding the fact that a major British...

Sir: A misprint crept into my article on capital punishment (16 July): in the second paragraph of the last column, 1 meant to say that there is evidence that in our century (not...

Sir: It is hard to make much sense of your leading article (16 July) on the trial of Gay News for publishing James Kirkup's poem 'The Love that Dares to Speak its Name'. You...

Sir: Whatever may have been said about divisions in the Cabinet, at least over Grunwick they have shown a true example of collective irresponsibility. Patrick Lawrence Fawley...

Leon Radzinowicz on crime and punishment

Simon Courtauld Sir Leon Radzinowicz has recently written, jointly with Joan King of the Cambridge Institute of Criminology, The Growth of Crime: The International Experience*....

Richard Boston The Notable Man: The Life and Times of Oliver Goldsmith John Ginger (Hamish Hamilton £7.95) The doctors who murdered Byron were far from untypical, for the...

Peter Ackroyd Johnny I hardly Knew You Edna O'Brien (Weidenfeld and Nicalson £3.65) If there are any rewards for unliberated, socially conditioned and culturally deprived...

Benny Green The Raj Quartet Paul Scott (Heinemann E7.50) It is doubtful if the British will ever quite lay the ghost of empire, even if the day ever dawns when they wish to,...

London and the Thames Terence Maloon The 'Fine Rooms' of Somerset House are open to the public for the first time since the Royal Academy moved out in 1836. They were the RA's...

Starlight Jan Murray Two superstars of movement, namely Nureyev and Curry, have each made an assault on their public images of late; so too the Ballet Rambert, which followed...

Dark comedy Ted Whitehead Abigail's Party (Hampstead) Candida (Albery) Some years ago I popped up in the theatre as E. A. Whitehead, and promptly received a letter from the...

Face values? John McEwen Moore, Sutherland and Ben Nicholson — like the title of a Highland landscape in the Summer Exhibition, the gravity of its sub-' ject precluding...

Priorities Richard Ingrams If politics is a matter of priorities, the same must be true also of television. Quite obviously the BBC does not regard commenting on current...

Ghost trains Jef frey Bernard It must have been wonderful to go racing in the pre-British Rail era. With spirits gay I mount the box, My tits up to their traces, With elbows...