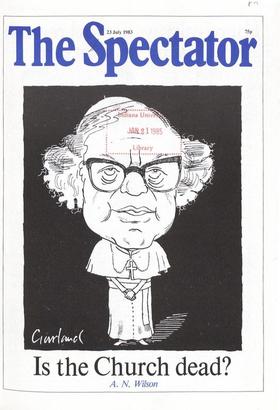 W hen Mr Callaghan won the Labour leadership in 1976, he beat as good a collection of rivals as any such competition has offered this century. They were Denis Healey, Roy...

From the soup kitchen Charles Moore I is a pitiful sight. Men in pin-stripe 'suits shuffle in the queue to the soup kit- chen which, with a touching remembrance of past...

T he other day, when I was visiting one of the slums of Calcutta, my guide pointed to a group of particularly wretched women and said: 'Those are Anglo-Indian.' I looked at them...

Nothing to say Auberon Waugh T he silly season would appear to have arrived with a vengeance when Dr Conor Cruise O'Brien devotes his column in the Observer to what must...

Cleaning up the g's

Patrick Marnham San Salvador T he commander of the United States military mission to El Salvador is called Colonel Homer Q. Finkelbaum. (Actually he is called something else,...

Christopher Hitchins T he Constitution of the United States forbids authority to inflict 'cruel or unusual punishment' and there was a time when the Supreme Court interpreted...

is looking for a new member of staff. Someone to assist in the general running of the office. The successful candidate must be intelligent, capable and able to take the...

The illusion of freedom

Janos Nyiri I left Hungary after the 1956 uprising and have lived since in France and in Britain. I had not been back for ten years until early this summer. Today, Hungary...

Andrew Brown 'The Incest craze really got started last 1. year, with the report of a Swedish Government Commission on sexual of- fences. The Commission's objective was...

The Rev John Henry Timins, Vicar of West Mailing, the clergyman who was found to have poisoned Sarah Ann Wright, by administering to her a teas- poonful of bitter almonds by...

Richard West Penrith C'timbria(sio T wenty years ago to the month, if my memory serves me well, the pop singer `Screaming Lord' Sutch stood as a can- didate at the...

Roy Kerridge T he River Wear, looping around a hill, created a natural moated fortress that was to become the city of Durham. With its castle and cathedral, its twisting...

Is the Church dead?

A. N. Wilson E merging from the cool of the cathedral, a flurry of black-habited nuns waddled sweatily into the scorching sunlight of the cloister courtyard, keeping custody of...

Sir: Rising-young-columnist watchers among Spectator readers who savoured as I did the first-rate 'Political commentary' of 2 July might find it interesting to be told that, in...

The Falklands Sir: Of all the statements made about the Belgrano incident in recent issues the most puzzling conies from Simon Jenkins when he writes (11 June) that the British...

Sir: In her review of Violet Powell's The Constant Novelist: A Study of Margaret Kennedy (2 July), Joanna Richardson complains of overemphasis on the subject's defects. 'One...

Sir: I suppose one should not look for any great

profundity in your 'Notebook' jottings, but your assertion (2 July) that a new Falklands airport will lead to depopulation of the islands strikes me as exceptionally silly....

Sir: Hymn-banners and hymn-mourners alike put all their emphasis on the words (A.N. Wilson, 25 June). They ought also to celebrate the tunes. Some are dull as ditch- water of...

Sir: I am rather startled by Mr Chancellor's brisk dismissal (4 June) of the late Miss Betty Trask's endowment, an annual award to the youngish author of 'a romantic novel or...

Jung as you feel

Francis King The World Is Made of Glass Morris West (Hodder & Stoughton £8.95) T he best way to describe this novel in a sentence is to say that it stands in the same...

Christopher Hawtree Brilliant Creatures Clive James (Jonathan Cape £7.95) O ne can picture the scene when the type- script of this book arrived on the desk of Cape's reader....

Bryan Appleyard M. R. James: An Informal Portrait Michael Cox (Oxford £14.50) H e died, according to Cox, just as the Nunc Dimittis was being sung in the Chapel it Eton. If...

The Digger in the woodpile

Married to a harridan

Peter Quennell The Great Marlborough and his Duchess Virginia Cowles (Weidenfeld and Nicolson £15) 0 ne of the happiest marriages in English history was that of John and...

Terence de Vere White "Virago Press have added Edith Wharton V to their Modern Classics list, and pro- pose to publish novels of hers long out of print after this pair of...

James Hughes-Onslow Potpourri from the Thirties Bryan Guinness (Cygnet Press £9.95) I t is a credit to Bryan Guinness that he never became a central character in Brideshead...

Poor law Maureen Owen F rom the way it is confidently assumed that any half decent character currently being interviewed or otherwise examined on the airwaves must...

In the bush Peter Ackroyd Smash Palace (' 18' , selected cinemas) N ew Zealand is a place, if I heard the opening song correctly, where men 'sip cold beer behind closed doors...

Party spirit Taki w ell, I guess Cyril Connolly's wasn't the only ambition to be jostled by idleness, love of luxury, and the pursuit of pleasure. Mine took such a battering...

Propaganda Richard Ingrams B y what was apparently an extraordinary coincidence two very similar program- mes about war reporting went out in quick succession on BBC and ITV...

Holy relics P. J. Kavanagh F or the first time I have been reading a novel by Barbara Pym. It is called Quartet in Autumn and is about four elder- ly people who work in an...

Privileged Jeffrey Bernard T he idea of becoming a writer first came to mind in 1937 when my nanny was Pushing me in a superbly upholstered pram across St James's Park on our...

No. 1279: Obfuscation Set by Jaspistos: A dialogue, please, bet- ween one person trying to ask a simple question in plain language (e.g. 'Will you marry me?', 'Could you tell...

Jaspistos reports: Competitors were asked for useless advice to recently reformed alcholics from a magazine 'psychiatrist' about how to fill with harmless activity a rainy...

Short circuit Raymond Keene A further Fide conference has been tak- ing place in London over the past week — continuing the series from Linares and Portorozh designed to...

S eventeen bodies were found in the Seventeen of a British Airways helicopter bound for St Mary's in the Isles of Scilly which crashed into the sea a mile-and-a half from its...