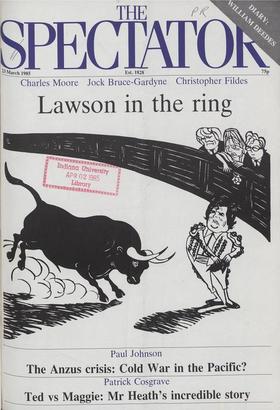 T he Chancellor introduced a short budget, without any of the radical measures which had been feared by his own party. The scope of VAT was not extended; tax privileges...

The micro Lawson Charles Moore A sadder and a wiser man? Certainly there was the world of difference between Mr Lawson's demeanour last year and this. A year ago, he was...

Lobbyists' victory Jock Bruce-Gardyne A sk what the boys in the backroom will have, and tell them I'm having the same.' So sang Marlene Dietrich: and so, on the whole, sang...

Lost budget Christopher Fildes Mr) one can have been more dis- appointed 14 by this year's Bud g et than its author. Upon Ni g el Lawson has fallen the Bane of the Second Bud...

The liked lump N o Green Paper, no reform, so the

pension funds seem to have escaped, lump sums and all. The Chancellor called those lumps and their tax treatment 'ano- malous but much-loved', and you can see why they are both....

Hopes discarded rr his, then, is the year of hopes

deferred, 1 and — what seems odder — of hopes discarded, of options disclaimed. So the Chancellor, puttin g Value Added Tax onto newspaper advertisin g , undertook that VAT...

now proclaim and precede them. So it was (the Chancellor told us) with company tax, and so it will be with personal tax. Well, so it was and it wasn't: the Green Paper on...

Lawson has been free to make. He has abandoned that insult to the market's intelli g ence, the cut in bank base rates stage-mana g ed for Budget morning. (They did the decent...

T he battle for the marshes of Iraq appears to be ending inconclusively or at least pausing while each sides buries the other's dead. Iran pushed a human wave into Iraq and...

T he real nature of militant socialism is revealed by a truly shocking story from poor longsuffering Liverpool. That city of superlatives first had Botanic Gardens in 1803. In...

O f all the consequences of 37 years of unbroken Nationalist rule in South Africa, one of the worst is the effect it has had on the white liberals. Apartheid gave them a perfect...

is looking for a production editor/sub-editor with experience of magazine production and a flair for the attractive verbal and visual presentation of articles. The post would...

W henever the Bishop of Durham makes a political statement which enrages Conservative MPs, the Archbishop of Canterbury feels that he has to defend him without at the same time...

Parkinson's Law Auberon Waugh L ast week the editor of the Spectator asked me whether I proposed to write about Cecil Parkinson's successful inter- locutory injunction against...

W hen anything dramatic happens to the Russian leadership, there enters my mind a deplorable episode of many years ago, which has probably influenced our relations with the...

Paul Johnson Sydney T he decision by New Zealand's Labour Prime Minister to ban American nuc- lear armed warships from his country's ports has led, in effect, to the scrapping...

. . .but indefinite purgatory Bohdan Nahaylo W hat is it about a regime that is so dependent on deception, that attempts to fool not only its population, but the rest of the...

Christopher Hitchens Cambridge, Mass. W e can't pay you much, I'm afraid. But I can probably get you put up in the John F. Kennedy suite. You can fantasise there to your...

French lessons Richard West T he Swann Committee, which failed to discover in six years why West Indian children 'under-achieve' in British schools, should have taken a look...

Edward Theberton Tanzania W hen the Mwenge wa Uhuru — the Freedom Torch — came to our village, the only thing symbolic about its arrival was that it was late. The Freedom...

The rage of the Conservative rank and file, rage as of leopards in a net, which so perplexes and worries their leaders, is not without excuse. Their situation i has become, in...

The fight for the Tory leadership

History and Mr Heath Patrick Cosgrave W atching the TVS documentary on Mr Heath, The Man Who Went to the Country, last week, I began to wonder how he now seems to the younger...

A fter working on the ill-starred love- story Ryan's Daughter, Robert Mitch- um said that 'working for David Lean is like being made to build the Taj Mahal with matchsticks'....

Racing with the Colonel

Simon Blow Cheltenham T have been staying for the races with a Ifriend of my late father. The two men had fought side-by-side during the last war, although Johnnie — as my...

Sir: Is it not somewhat ridiculous for Hugh Lloyd-Jones (Books, 2 March) to tout the work of his new American bride? If the good professor really believes that Peter Levi's...

Sir: Max Hastings's admirable review of Philip Ziegler's Mountbatten (Books, 16 March) in which he refers to Lord Louis's natural vanity and unbridled ambition, reminded me of...

Sir: Christopher Hitchens (Where babies go to', 9 February) points out that femin- ists did not demand that others had abor- tions, while those who oppose abortion do demand...

Sir: Richard West's references to 'Yob- boes' and 'Loonies' (2 and 9 March) are a vivid reminder of childhood when calling people names is such a handy technique of establishing...

Sir: Perhaps you will allow me to correct a misstatement

in Max Hastings' interesting review of Philip Ziegler's biography of Mountbatten, viz 'The author's publishers have done him no service with their ful- some jacket blurb, which...

Palestine: whose country? Sir: How strange that Joan Peters's From Time Immemorial is 'so highly praised by the American intellectual community' and so savagely belittled by...

Immemorial con- cludes that she has so filled her work with error and distortion that 'it would take another book, rather than a review, to list and explain them all.' This book...

The right to snoop Colin Welch T don't know whether Mr Leon Brittan is 'passionately sincere in his efforts strictly to control all phone-tapping by our security forces. Some,...

The dislikeable doctor John Grigg Hugh Dalton Ben Pimlott (Cape £25) Q o far there have been comparatively L./ few doctors in the House of Commons, and of these nearly all...

Emma Goldman: An Intimate Life Alice Wexler (Virago £12.95) A narchism, strictly speaking, does not really exist. I, at any rate, have never been able to discover a body of...

Imposters on the run

Not so Beau Geste

John Keegan The Conquest of the Sahara Douglas Porch (Jonathan Cape £15) T here is an image of the French army that has become a cliché of popular entertainment — a little...

Not one of us

Andrew Brown The Right to Know: The Inside Story of the Belgrano Affair Clive Ponting (Sphere £2.50) W e know now that he was not one of us, but it is still surprising to...

The greens have it

`Why isn't there an Engineers' Corner in Westminster Abbey? In Britain we've always made more fuss of a ballad than a blueprint How many schoolchildren daydream of becoming...

Brian Inglis Whose Body Is It? Carolyn Faulder (Virago £3.95) Life Without Tranquillisers Vernon Coleman (Piatkus Books £6.95) I f, tomorrow, you start on a course of drugs...

The gift of tongues

Direct line to the past Giles Auty W hen I first saw John Wonnacott's paintings in British Painting '74 at the Hayward, the bubble exhaled by the d, Ying lungs of Late...

Tempus fugueit Peter Phillips H aving, as I thought, summarily dealt with the crop of musicians who have important birthdays to celebrate in 1985 (12 January), I was surprised...

'Song and dance Peter Ackroyd Carmen (`PG', Lumiere Cinema) T his particular version of the opera began, as no doubt it should, with the closing moments of a peculiarly bloodY...

Toi - tured Christopher Edwards (Other Places: three plays, One For the Road, A Kind of Alaska and Victoria Station) (Duchess) rrhis production presents a triple bill of 1...

There is now a small charge of £1 per insertion (max. 2 books). Cheques made payable to The Spectator. Please send details to Books Wanted, The Spectator, 56 Doughty St, London...

Hit and miss Alexander Chancellor Cpitting Image (ITV, Sundays), the satir- ical puppet show, is a terrifically hit- and-miss affair. Much of it is either incom- prehensible...

Salt 'n blood Alice Thomas Ellis I t is not generally acknowledged how very contentious is the subject of food and cookery. I lost my temper recently because one of my dearest...

Nose in. trough Taki Gstaad I've said it before and I'll say it yet again. icome wintertime, there is no place as beautiful as Gstaad, and no resort as much fun to be at. Once...

Enfeebled P. J. Kavanagh Driggishly, smuggishly (there should be 1 such a word, meaning not quite smug- ly) I was staring from the train window while my acquaintance opposite...

Jaspistos reports: Competitors were asked for. a list of conditions for tolerable matri- mony laid down by both sexes, in the spirit of Mirabell and Millamant. 'You clean the...

Outfoxed Raymond Keene A fter he won the 1984 US cham- pionship, Soviet émigré Grandmaster Lev Alburt had a bright idea: to challenge the British champion, Nigel Short, to a...

Somewhere over the Atlantic T he Englishman had parked by the side of a main road near Brive. There he was, at 8 a.m. , one foot gingerly placed on French soil, the other on...

Cthez Nico is for those who take eating ‘,.....,seriously. It is in Queenstown Road, between Chelsea Bridge and Clapham Junction, the most dismal of places: those never-ending...