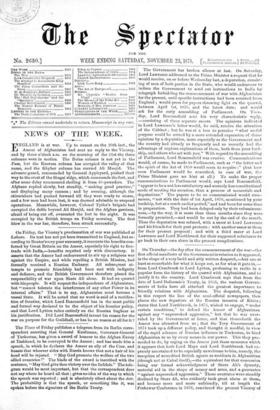 -E NGLAND is at war. Up to sunset on the 20th inst., the Ameer of Afghanistan had sent no reply to the Viceroy, and by three o'clock a.m. on the morning of the 21st the three...

official manifesto of the Government in relation to it appeared, in the shape of a very lucid and ably written despatch,—but one at least as remarkable for what it keeps out, as...

The Times of Friday publishes a telegram from its Berlin

corre- spondent asserting -that General Kaufmann, Governor-General of Turkestan, has given a sword of honour to the Afghan Envoy at Tashkend, to be conveyed to the Ameer ; and...

The Government has broken silence at last. On Saturday, Lord

Lawrence addressed to the Prime Minister a request that he would receive, on or before Wednesday last, a deputation, consist- ing of men of both parties in the State, who would...

41 ,,,* The Editors cannot undertake to return Manuscript in any

On Friday, the Viceroy's proclamation of war was published at

Lahore. Its text has not yet been transmitted to England, but ac- cording to Reuter's very poor summary, it recounts the benefits con- ferred by Great Britain on the Ameer,...

Mr. Dillwyn—in many respects a typical Radical—made a vigorous speech

to his constituents at Swansea last week, in which he severely criticised the Government. Financially nothing could be looser, he said, than their revision of the rapidly-...

King Ilumbert of Italy has narrowly escaped death. On Sunday,

as the King was entering Naples in an open car- riage, from a railway-station, a cook, named Passanente, aged twenty-three, advanced, apparently to present a petition. He held a...

The news from Natal is bad. Lord Chelmsford (General Thesiger)

has his hands full with Secocoeni, and the Europeans in the Transvaal and Natal begin to be suspicious that the Zulus intend a general massacre of the whites. Lord Chelmsford...

Sir Wilfrid Lawson, too, at Carlisle, on Monday, gave a

most graphic description of the triumph of Lord Beaconsfield and Lord Salisbury, after the conclusion of the Berlin Treaty :—" Our wonderful diplomatists had made confusion...

On Monday, Mr. Chamberlain made one of his most effective

speeches, in an out-of-the-way district of Birmingham,—a school- room at Little Heath. After pointing out how the Conservatives made a great show of domestic reforms at the...

M. Gambetta has made a mistake. The Chamber of Deputies

is still slowly getting through the invalidations of elections, and on Monday the election of M. de Fourtou, the reactionary Minister of the Interior, came up. It was clear,...

Ashton-under- Lyme, offered some explanation of the reason why our cotton cloth was being beaten out of the Indian market. It was, he said, the rascality of some of our...

The Paris correspondent of the Times forwards a curious list

of the names circulated in 1848 from the Central Police Office of Berlin as those of men politically dangerous and suspicious. Among them are Mazzini, the deceased Radical...

The University of Cambridge is trying to do what it

can to improve the distribution of its own clerical patronage. It is pro- posed to create a Board of Patronage, consisting of nine members in all,—four members nominated by the...

Mr. Berry, the Liberal Premier of Victoria, has carried his

plan for the reform of the Constitution through the Assembly, by a vote of three to one. Under this plan, whenever the Assembly and the Council differ, the rejected Bill would...

The locked-out labourers of Kent and Sussex held a meeting

in Exeter Hall on Wednesday, the really important fact of which was that the men who were too poor to come were assisted with money by the London artisans. That is the first...

The Prussians are learning one of the consequences of war.

They thought the £200,000,000 taken from France would enrich them for ever, but the Royal speech on November 19th is de- voted in great part to financial difficulties. The...

At a session in Banco on Saturday of the Queen's

Bench Division of the High Court of Justice, Lord Coleridge and Mr. Justice Mellor decided that fox-hunters have no right to trespass on an estate from which they are warned off...

A decision has been given in Jersey which, if it

were good law in England, would alter the position of every shareholder in an unlimited Bank ; and in the case of the Glasgow estab- lishment, ruin the creditors or the long...

I N their Afghan policy, as in their Turkish policy, the Government have followed their usual course, in supplying the country with some meagre information as to the reasons for...

THE WAR. I T is with deep regret that we record the correctness of our anticipations of last week. Lord Beaconsfield's plan has succeeded, and England is at war. Lord Lytton,...

THE ATTEMPT TO ASSASSINATE KING HUMBERT.

W E should say, on the whole, that the alarm just now existing among Kings is well founded, and that their danger has of late been decidedly increased. It has always been very...

THE PRIVY COUNCILLORS AND THE PRESS.

W E have heard a good deal of reproach during the last few days, both in the Press and in society, directed against the great public men who have, unsolicited, offered their...

T HE "scene "of Monday in the French Chamber, in the debate on M. de Fourtou's election, is important, as revealing, what Englishmen so often forget, the depth of the moral...

to his Clergy fully justifies his appointment. It is kindly and, what is a rarer virtue in Episcopal manifestoes, it is sensible. Dr. Thorold says plainly what he means, and his...

THE "PALL MALL GAZETTE" AND THE SPECTATOR."

IN our article on the Rhodope Commission last week we were careful to confine ourselves to a summing-up of the evidence on both sides, leaving our readers to form their own...

HE new Bishop of Rochester, Dr. Thorold, in his spirited pastoral, attacks rather sharply, though very good-naturedly, the self-Conceit of some of the younger Clergy. "Is it too...

THE NEWEST PORTRAIT OF PRINCE BISMARCK.

I T is difficult to doubt that the new pen-and-ink portrait of Prince Bismarck, just issued by his Secretary and Boswell, Dr. Busch, has been published with a purpose. It was...

have read with great interest the letters in the two last Spectators on " The Education of Girls," and it seems to me that both your correspondents make the common mistake of...

[TO THE EDITOR OF THE " SPECTATOR.") SIR,—My attention has been called to a suggestion made by Mr; Portal, in the Spectator of the 9th inst., that local authorities should be...

THE INDEPENDENCE OF GIRLS.

[TO THE EDITOR OF THE " SPECTATOR.") Sin,—May I be allowed to say a few words in behalf of a suffi- ciently numerous class, the hardship of whose position in life is not quite...

[TO THE EDITOR OY TILE SPECTATOR."] Sin,—During the last five months a great deal has been said and written about Cyprus, but writers and speakers alike have, as far as I am...

IRISH LOVE-SONG. Mourne."J WOULD I were Erin's apple-blossom o'er you, Or Erin's rose in all my beauty blown, To drop my richest petals down before you, Within the garden where...

[To THE EDITOR OF TILE "SPECTATOR: SIR,—The incidental allusion to the Conservative politics of Irish Dissenters which occurs in my former letter ought to have been qualified,...

THE ART OF EUROPE.—I. IT is with the greatest diffidence that I offer the following re- marks on the various Schools of Painting which were repre- sented at the French...

MR. CHURCH'S " STORIES FROM VIRGIL."* Mn. Cnuncn's Storks from Virgil will be, we think, at least as popular as his Stories from Homer, and it may be even more so. At least to...

THE SHORES OF THE POLAR SEA.*

TnE tale of Arctic travel has been told so often and so well, it might seem needless to multiply books on the subject, but that for some minds the question of Arctic exploration...

WOMEN OF FASHION" IT was doubtless in a moment of

critical ambition that the patriarch Job expressed the wish that his adversary had written a book. In reading and commenting on an original though hos- tile work, it is not...

AMONG the first names in the small list of illustrious women who have done real work in connection with painting and sculpture, Mrs. Jameson is rightly placed. And this memoir...

novel, like "Olive Varcoe "and others which have crime from the same pen, shows ability ; but the writer certainly over-rates her powers, if she thinks that they enable her to...

Old and New London ; a Narrative of its History, its People, and its Places. By Edward Walford. Vol. VI. (Cassell and Co.)—This sixth volume concludes a work of great merit and...

The O'Connell Centenary Record, 1875. Published by the Authority of

the O'Connell Centenary Committee. (J. Dollard.)—This stately volume has a size and a weight that are quite heroic, and bears to ordinary books the same proportion that we may...

an obvious merit of George Hem that it is easy to read. Apart from questions of character or plot, the writer's taste and culture show themselves so manifestly, that we are glad...

NEW EDITIONS.—Mr. R. W. Dale has prefixed to the "

seventh edition" of his lecture on The Atonement (Hodder and Stoughton) a remarkably interesting preface, in which he notices and replies to some of the more important...

The Parliamentary Buff Book. Edited by T. N. Roberts.—This is

the eleventh yearly volume of analyses of the divisions of the House of Commons, and gives, in addition to a descending scale of attendances of Members at divisions, a list of...

Eason's Almanac and Handbook. for Ireland. (W. H. Smith and

Son, Dublin; Simpkin, Marshall, & Co., London.)—The sixth number of this useful compilation records in its calendar those events that are strictly connected with Ireland and...