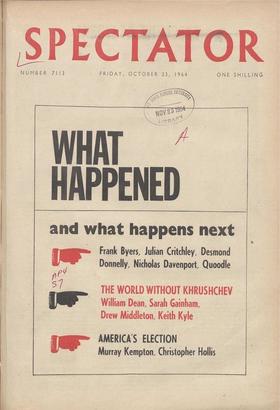 —Portrait of the Week— Sr` THE COUNTRY WAS STARK, staring

bonkers after all. By a tightrope majority of four Labour became the masters again—although its hopes of another 1945 became just another 1950. The opinion polls converged at...

A Call to Work

1 AST week the Spectator leader included this comment : 'the editorial policy of the Spectator remains Tory Radical. So it will be next week, and next year, and it has no...

THE WORLD WITHOUT KHRUSHCHEV

Changes Still to Come? WILLIAM DEAN writes: Whoever it was who engineered the downfall a Mr. Khrushchev and his replacement by the 'collective leadership' of Messrs. Brezhnev...

SARAH GAINHAM writes front Bonn: The senior Russian diplomat in Bonn who was my guest on Tuesday last week had no idea of any coming shock; otherwise he would not have appeared...

DREW MIDDLETON writes from Paris: The General is in his Elysee Palace, but all is - not right with the world. A series of shattering events has jarred the French, and, indeed,...

KEITH KYLE writes: One ideological task confronting Brezhnev- curiously neglected in Khrushchev's Moscow, though apparent to polycentrists like Gomulka and the late Togliatti—is...

Farewell to the Jungle By DAVID WATT I SHOULD like to be able to say that my ideas lof a Promised Land are drawn exclusively from Pilgrim's Progress and the Book of Exodus,...

Mr. Brundage, President of the Internationa' I Olympics Committee, said: The movement is a religion which incorporates all the basic values of other religions.'—News item. The...

A Search for a New Party? By DESMOND DONNELLY, MP M Mr. Wilson was taking up residence in .. Downing Street and Sir Alec Douglas-Home was thinking wistfully about a few days'...

By FRANK BYERS T IlE Conservatives have no one to blame but themselves for having lost the election. They were fortunate not to have fared worse, as they would have done had...

Lessons of a Lost Battle

By JULIAN CRITCHLEY Mr. Wilson: Why do I emphasise the importance of the Royal Navy? A Voice: Because you are in Chatham. W ELL, if we achieved nothing else, we can claim the...

Silly Billy By RANDOLPH S. CHURCHILL SIR WILLIAM HALEY'S The electorate seems to have been bemused and bewildered by Sir William's advice. They must have misunderstood the...

Scandal and the Royal Progress From MURRAY KEMPTON NEW YORK M R. JOHNSON has lost Walter Jenkins, his closest assistant, under circumstances which might, in ordinary times,...

From CHRISTOPHER HOLLIS BOSTON B RITAIN is a small mixed-in country. In general there is in Britain a similarity of trends and opinions between one part of the country and...

Slop-Gap and Son They are not only old-fashioned : they

are old. Between them a hundred years older than Sir Alec's Cabinet. And some of them have been appointed with the strange reassurance from the Prime Minister (carefully...

Birth of Zambia I am sorry that the emergence of

Northern Rhodesia into independent Zambia should have been marred by the 'Chartered' incident, and I am sadder still not to be there for the celebrations. But like other crises...

Mr. Wilson Pays his Debts • We had heard so

much about the need for • a smaller Cabinet of dynamic men that Mr. Wilson's final selection of a Cabinet of twenty- three (no change) is a surprise. So, too, is the...

It's an ironic comment on Russian politics that the Guardian greeted the 'news of Mr. Khrush- chev's downfall with what had obviously been prepared as his obituary. Many reasons...

I HAD no joy of the result from Smethwick. This does not mean that I think Mr. Gordon Walker should be made into a hero. As Enoch Powell wro'e in the Sunday Telegraph: 'The new...

At the Vatican Council

Pope and Bishops From BARBARA LUCAS ROME T HE first five weeks of the third session v& the second Vatican Council have been brisk, busy and fruitful. New matter has been...

From Derby comes my favourite general elec- tion story. The Tory candidate out canvassing knocked on a door. It was opened by a house- wife. 'Madam,' he said, 'are you on the...

David Watt's contribution in this issue is his last article as our Political Correspondent. He leaves in a few weeks to become the Washington correspondent of the Financial...

SIR,—As a Protestant clergyman who has lived several years in

Northern Ireland I cannot agree with Mr. Walker's somewhat over-simplification of the political strife in that country, by describing it in terms of a Protestant majority versus...

out of my taxes Speaking (like him) as one of the general public I would rather my money went towards maintaining swift and safe rail transport than having to subsidise the...

THE PSEPHOLOGISTS SIR,—With regard to Alan Watkins's recent article 'Down

with the Psephologists,' did the Labour Party or Mr. David Butler win the election? I. MICHAEL DAVIES Leinster Gardens, Bayswater, W2

COLOUR AND THE ELECTION

SIR,—When I wrote a letter on colour and the election to the Spectator in September, I did not anticipate that after the election the Smethwick electors would be taken to task...

SIR,—May I inquire under what legislation was the secret ballot

abandoned in parliamentary elections? When I voted last Thursday, I had to present myself at a table with a card, previously delivered by post, which gave my number on the...

THE SECRET BALLOT Snt,—I was surprised to read in 'Afterthought'

that Alan Brien thinks that our voting procedure ensures a secret ballot. Perhaps his photograph is unkind to him and he is too young to have voted yet? While polling station...

BELFAST RIOTS SIR,—Concerning the Belfast riots, the police were batoning

THE MOVEMENT AND THE GROUP SIR,—Mr. Douglas Hill can come

out from under the bed: the 'doctrine and orthodoxy' of the Group which so much frighten him are figments of his own imagination. If the mere mention of an association of poets...

railway closures, by saying that all I cared about was that his travel on our subsidised roads should not be paid for out of my taxes. In actual fact, however, I also care...

SIR,-1 am gathering material for a biographical introduction to a collection of the poems of Anna Wickham, and 1 should be most interested to hear from any of your readers who...

SIR,--1 am intrigued by Mr. Kenneth Ames's refer- ence to

'serious eating and drinking.' It is disturb- ing to find out suddenly that for years you have been ignorantly taking food lightly. Perhaps Mr. Ames is only joking, though.

SIR, - , --Both Mr. Dencs and Leslie Adrian are right in their particular ways. Each is speaking of his own experience. Adrian, it now becomes clear, is accustomed to have wines...

SIR, ---lain Macleod arrogantly asserts 'There is little doubt that the Young Socialists .... have been involved' in the heckling of Tory ministers during the election campaign....

SIR,—In a letter in the Spectator of October 16, His Excellency the High Commissioner for Ceylon says: 'Buddhism is well known for its tolerance and for its good will towards...

Sot,- -If Leslie Adrian chooses to call it 'The Battle

of the Bottle,' I am quite willing to join. His account of atrocities to wine makes pathetic reading, Und I would not question its veracity. However, it is a long way from...

year, Sir Gerald Nabarro was banned from the Union (which he had no in- tention of entering) for remarks expressed on the colour problem. The proposer of the ban has since been...

SIR,—As one of your overseas subscribers, I am worried by your vestigial venture into cover colour. Keep it pure black (and white)! Like Mr. Donovan (your columns, October 9) I...

SK—In airily dismissing Hanna Segal's book Introduction to the Work of Melanie Klein, Dr. Sargant rests his case on one point and one point only; namely, that neither Melanie...

By ISABEL QUIGLY Les Carabiniers. (Academy Cinema Club.) — The Carpetbaggers. (Plaza.) (Both `X' certificate.) WAR has at last made peacemongers of us all, so an anti-war film...

The Dutch Courtesan , (National Theatre.)– The Corn is Green. (Hampstead Theatre . Club.) IT is almost exactly a year to the day since the National Theatre first opened at the...

What Shall we do about Caroline?

By CHRISTOPHER BOOKER On the telecommunications front, of all the problems requiring Mr. Benn's particular atten- tion in the first Hundred Days, four in particu- lar stand out...

An unknown boy speeding past Vaughan Oa his bicycle caused him to make an entry his wartime journal which is typical of creative thought. If the riddle of that boy's ea'...

We sat in the kitchen and listened to the rain That spluttered on the pane like something frying; The silence simmered, but we did not season it; We had mislaid effective...

Towards the Great Secret By STEPHEN POTTER 2‘14 old enough to have lived through the two Iseparate decades of Lawrencismus—first the Twenties; and then the revival, which began...

The Letters of Robert Frost to Louis Untermeyer. (Cape, 42s.) FRogr's courage comes through most poignantly, in these letters, in 1938 with the death of his wife Elinor. He...

A Short History of the Middle East from the Rise of Islam to Modern Times. By George E. Kirk. (Methuen: University Paperbacks, 15s.) Empire by Treaty: Britain and the Middle...

New Grange and the Bend of the Boyne. By Sean P. 0 Rforddin and Glyn Daniel. (Thames and Hudson, 35s.) NEW Grange is certainly one of the greater marvels that survive from...

It's a Crime S1MENON is very good at those poignant

indi- vidual sufferers for whom the law provides no redress. Maigret gets deeply involved with a pathetic creature who haunts his office for weeks before daring to speak, in...

The Long and the Short and the Tall

The Big Switch. By Muriel Box. (Macdonald, 16s.) How I do wish that publishers would send out review copies three months—rather than three weeks or less—before publication, so...

The City and the Labour Government By NICHOLAS DAVENPORT THIS is a nerve-testing time for the City. The ad- vent of a Labour Govern- ment had been written up into such a major...

By CUSTOS "rim equity markets had made themselves very I vulnerable by building up a bull position on the prospect of a Conservative win. The ad- justment on Friday last week...

• 'Cars without Glamour By LESLIE ADRIAN Among the dedicated motoring fraternity it must seem incredible that so many people should be taken in by 'badge engineering' and by...

By MARY HOLLAND I WAS taught French literature in the sixth form by a woman who could remember when the pupils in her charge were given an education consisting mainly of...

By ALAN BRIEN I TURNED to the index of The Faber Book of Aphor- isms (Faber, 30s.), edited by W. H. Auden and Louis Kronenberger, with the pessimism born of long experience. I...

soLuirmisr TO CROSSWORD 1149 ACROSS. -I Mulberries, 6 Acre. In