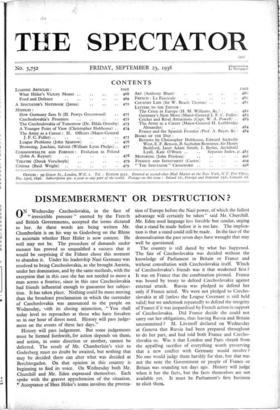 O N Wednesday Czechoslovakia, in the face of " irresistible pressure " exerted by the French and British Governments, accepted the terms dictated to her. As these words are...

M R. ATTLEE'S letter to the Prime Minister this week repeats the demand, made nearly a fortnight ago, that Parliament should be convened. Today the demand is hardly necessary ;...

The Role of Italy On Sunday Signor Mussolini made his

contribution ti , the international discussion in a speech at Trieste, urging a plebiscite for all the national minorities in Czechoslovakia. Little comment need be made on the...

meeting of the League Assembly last week was an expression of the British Government's desire for certain modifications in the League Covenant, and especially Art. XVI...

Spain and Foreign Troops Dr. Negrin's announcement to the League

of Nations Assembly that the Spanish Government had decided to repatriate all foreigners fighting in its ranks is an opportune if painful reminder that international problems...

Japan on the Yangtse One important effect of Europe's preoccupation

with the Czech crisis is that aggressors who are already in the field can proceed without fear of intervention or even restraint from abroad. In Spain indeed the insurgents are...

The Bombing of Civilians The proposals for prohibiting the bombing

of civilians from the air, laid before the League of Nations Assembly by Captain Euan Wallace on Tuesday, have little more than a melancholy academic interest. The suggestion is...

The Report of the Advisory Committee on Town and Country

Planning which has been issued this week is dis- appointingly jejune. The report proposes no major amend- ments of the law, but suggests a number of minor alterations which...

The accident which occurred in May on the Underground Railway

between Charing Cross and the Temple was a shock to public opinion, which had almost come to accept the Underground system as beyond suspicion of error. No explanation of the...

Victimising Ex-convicts The appeal for restraint on the part of

the Press in writing about ex-convicts which Mr. J. A. F. Watson, vice-president of the National Association of Prison Visitors, has made this week in a letter to The Times...

The Migration of Workers Interesting light on the movements about

the country of insured workers in search of employment is cast by calculations made by the Ministry of Labour on the basis of a sample analysis of the unemployment...

The L.M.S. Centenary The exhibition which at present is making

an unusual and co:vurful display at Euston is a reminder of the almost fabulous development of railways in this country. This week's centenary celebrates the hundredth...

A WARENESS of the danger of war has brought with it, for many people, an awareness of how inadequately prepared this country is. The deficiencies in the A.R.P. programme have...

I WROTE last week of the remarkable unity of this country in face of the crisis. Now —. We have not begun yet to know what the country thinks. Men who are still hanging their...

HOW GERMANY SEES IT

By H. POWYS GREENWOOD " W HEN is the Cabinet meeting ? Is Parliament going to be called ? Is Chamberlain coining back here ? Was it really his first flight ? " Questions like...

M ANY not particularly well-informed criticisms of the action of the Peace Conference in giving Czecho- slovakia its present frontiers have been expressed recently in various...

THE CZECHOSLOVAKIA OF TOMORROW

By DR. HILDA ORMSBY* A. READJUSTMENT of the Czechoslovakian frontier to exclude those areas having a majority of German- speaking people will entail consequences to the...

A YOUNGER POINT OF VIEW

THE ARMY AS A CAREER : H. OFFICERS

By MAJOR-GENERAL J. F. C. FULLER T HE problem of the commissioning of officers in our Regular Army is a far more difficult one to solve than that of the recruiting of its rank...

By JOHN SPARROW D O I allow the League, the problems which a study of its affairs continually brings to light, the rivalries of its constituent members, and the excitements...

By WILLIAM LYON PHELPS I N the spring of 1884 Browning heard Joachim playing I in London, and apparently in response to a request sent him this manuscript verse, here for the...

Commonwealth and Foreign By JOHN A. KEYSER IN Poland the final decision between totalitarianism or a return to a more democratic development has not yet been taken. The...

THE THEATRE "Dear Octopus." By Dodie Smith. At the Queen's Theatre THIS octopus, whose name is Randolph, is an English family and the pet of Miss Dodic Smith. Patriarchal in...

" Spawn of the North." At the Plaza--" Vivacious Lady." At the Regal—" Breathless Moments." At the Cameo IN the good old days of cinema, action and dramatic tension were the...

Standards—III IN two earlier articles I tried to suggest that the usual method of applying a single standard to all kinds of painting was over simple, and that it was...

The Arrival of Timber The provision of cheap, comfortable and beautiful cottages for rural labourers should be definitely promoted by the exhibition during the week of Mr....

[To the Editor of THE SPECTATOR] SIR, — In these days when

national morality is at a discount it is refreshing to read the letter from Mr. Watson, and to learn that there are some who still have ideals and a belief that there can be no...

[To the Editor of THE SPECTATOR] SIR, — If, in spite of

our desires and all efforts to avert it, war should break out, great as that disaster would be for civilisation, a Nazi victory would be greater. Since, in that dread event, the...

[To the Editor of THE SPECTATOR] SII2, — Eyen treachery must (I

suppose) seem to be logical. Are we prepared to give up our African possessions to the Natives—or even the Union of South Africa to the Dutch ? And what about India ?—Yours...

THE CRISIS IN EUROPE

Editor of THE SPECTATOR] Sut,—" Janus " seems to think that it was only the invasion of Belgium that made us go to war in 1914. Lord Snowden, on the contrary, in his...

[To the Editor of THE SPECTATOR] Snt, — A morning and an

evening paper of different political complexions both assure me that the " plan ." agreed on between Mr. Chamberlain and M. Daladier is complete surrender to Hitler. Not only is...

SIR, — It seems that the old Parliamentary gossips were wrong and

that, after all, Popkins had a Plan. [To the Editor of THE SPECTATOR] We give to Germany a large part of the Czech country which is " German " and guarantee ‘the new frontiers....

GERMANY'S NEXT MOVE [To the Editor of THE SPECTATOR] SIR, —In

you issue of September 16th there appeared an article under the above title, in which the writer, after referring to Herr Hitler's speech of the 12th inst., says : " He said...

CRICKET AND RIVAL ATTRACTIONS [To the Editor of THE SPECTATOR]

SIR,—May I be permitted to endorse Mr. Sladc's view that the rules of cricket should not be regarded as sacrosanct, and to emphasise the necessity of reforming them if cricket...

[To the Editor of THE SPECTATOR] SIR,—Apropos of your article, "Air Raid Precautions," I should like to ask whether any solution has yet been found to the problem of respirators...

[To the Editor of THE SPECTATOR] SIR,—Your readers owe a

debt of gratitude to Professor Albert Bayet for his letter in your issue of September 9th. The Pyrenean frontier is recognised today by many Britishers as an important factor in...

[To the Editor of THE SPECTATOR] SIR,—The Minorities Law lately promulgated in Rumania deals only with certain racial and linguistic minorities. There are, however, religious...

THE ARMY AS A CAREER

[To the Editor of THE SPECTATOR] SIR,—I fear I must take exception to General Fuller's statement in his article under the above heading that the army " is largely recruited from...

[To the Editor of THE SPECTATOR] SIR,—One of your readers assumes in a letter published on September i6th that, since I would reopen the Franco-Spanish frontier, it must be that...

THE PRINCE CONSORT ON PAPER

BOOKS OF THE DAY By CHRISTOPHER HOBHOUSE Da. KURT JAGow has extracted from the Brandenburg-Prussian archives a large number of hitherto unpublished letters written by the...

JANE AUSTEN AND THE WOMAN QUESTION

IT is impossible to have too many of Disraeli's letters, and this engaging little volume, containing fifty as yet unpublished, is a-welcome addition to them. Nobody else could...

Tim problem of the pleasure-giving drug is one that raises questions r o: only of chemistry and physiology but of sociology, politics and religion, and indeed the whole complex...

The Queen's Cause. By Mrs. Hubert Barclay. (Michael Joseph. 1 5s.) WALTER GOODALL, a hanger-on of David Hume, wrote the first defence of Mary Stewart in 1754. (Hume once woke...

THE DEVELOPMENT OF MODERN MUSIC

A Hundred Years of Music. By Gerald Abraham. (Duck- worth. z5s.) IN the beginning of the nineteenth century the development of European music altered in character, and what had...

REVIEWERS and dust-jackets seldom agree, but when the publishers describe Spanish Recruit as " the first great novel of the Spanish Civil War," they are, I think, speaking no...

America on Accidents A few days ago I was invited to see The March of Time news film which deals principally with the manner in which the United States are coping with the...

By CUSTOS THE City is cynical about the latest efforts to save the peace of Europe, but it is also realistic. There are many who feel that while the political risk has been...

DISCOUNT RATES RISE ONE of the striking features of the weeks of crisis has been a revival of the discount market, a part of the City's equipment which had been almost...

BY ZENO [A prize of a Book Token for one guinea will be given to the seni e , the first correct solution of this week's crossword puzzle to be ope‘ Envelopes should be marked "...

SOLUTION TO CROSSWORD NO 312

SOLUTION NEXT WEEK The winner of Crossword No. 312 is Mrs. Lewis, Drylaw, Merrow, Guildford.