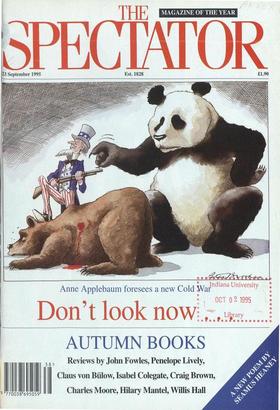 M r Eddie George, the Governor of the Bank of England, said that he was no longer pressing Mr Kenneth Clarke, the Chancellor of the Exchequer, to raise inter- est rates. At the...

Why shouldn't we pay a fiver for accidentally summoning an ambulance? It's politics, stupid BORIS JOHNSON I t was no one's fault. But somehow mat- ters became a little out of...

RICHARD LITTLEJOHN M ost people tuning in to The Last Night of the Proms on BBC 1, I would imag- ine, had never heard of Sir Harrison Birtwistle. The inclusion of his work for...

Show your Gold Card to prove that you are a full member of the species Homo sapiens CHARLES MOORE L ast week the Daily Mail ran a pair of articles on the same day jointly...

John Simpson explains why the British Government is blocking international efforts to ban anti personnel mines Salzburg THERE SHOULD, I remember thinking, be a special hell...

WHOSE MONEY IS IT ANYWAY?

John Laughland argues that the Thatcherites' opposition to European monetary union is vitiated by a fatal flaw OLD CANARDS never die; even when they seem to have been...

persist.. . I HAVE just returned from the fourth World Conference of Women in Peking, where I was poisoned by piety. It was a great relief to get back to my ward, where people...

THE DEATH OF POLITICS

Robin Harris asks what is the point of party conferences when the Labour and Tory leaders both despise political ideas THE LUDICROUS interlude of the Lib- eral Party...

`GOD HELP anyone subjected to a peace process,' said my husband sud- denly the other day, looking up from his breakfast newspaper. 'The Bosnians have had it for four years, now...

By Grand Central Station I Sat Down and Wept. By Elizabeth Smart. (Edi- tions Poetry London. Nicholson and Watson. 6s.) It would perhaps be easy to criticise this book â and...

CALL THIS NUMBER' Reginald Potterton reveals how American companies fleece British inventors. He knows. He did it Florida I AM, or was, a crook. My field was the inventions...

Where civic commonsense is bliss, 'tis folly to be Wise PAUL JOHNSON M y heart goes out to Tony Blair in his battle to rescue Labour from its Nean- derthals. There are still...

With cat-like tread, the men from the ministry come back to call on Lord Archer CHRISTOPHER FILDES I t is no pleasure to be questioned by the Department of Trade and...

Sir: May Iâ¢ draw your readers' attention to a recent

euphemism for abortion used by Miss Polly Toynbee on Channel 4 televi- sion? Miss Toynbee's phrase was 'not carry- ing on with the pregnancy'. Note how this phrase â unlike...

Sir: I have been meaning to write to con- gratulate

Sir: Anne Applebaum's comments on the UN women's conference in Beijing were, for the most part, welcome and wise (Feminism: the final form of western Imperi- alism', 9...

Sir: It puzzles me that Auberon Waugh finds nothing to admire in the work of Gilbert and George (Another voice, 16 September). I often think that their art is exactly like his...

Sir: The content and innuendo of Kevin Myers's article (What you see is what you get', 16 September) on the 'tribal' charac- teristics of a number of Ulster Unionists, including...

Sir: Nigel Nicolson is very censorious about the display of antiquities in the Ashmolean Museum (Long life, 2 September). Had he read the numerous notices in the galleries and...

Those were the days

Sir: I suspect you published Ms Bose's provocative piece (`Enough guilt for every- one', 19 August) in order to attract some nice rotten eggs from your readers. To equate...

Sir: I am a retired surgeon. John Studd's letter (26 August) reminds me of a dilem- ma that faces the operator occasionally, one with which your readers may not be familiar. You...

Sir: 'Do octopuses have souls?' Simon Jenkins asked, while failing to spear his din- ner on the Mediterranean sea-bed (Centre point, 9 September). Hard to say, but what they do...

Sir: May I be allowed to reply to Michael Sissons' apoplectic attack upon myself and others (The wrongs of animal rights', 2 September)? If he believes that the current...

The Bloomsbury group's one bankable, collective asset: sex s MON JENKINS H ere, at last, is the big one. In London next week a film opens with the pithy title of Carrington....

We are all cousins Anthony Gottlieb DARWIN'S DANGEROUS IDEA: EVOLUTION AND THE MEANINGS OF LIFE by Daniel C. Dennett Allen Lane, Â£25, pp. 586 I t is an old story worth...

Charles Moore BLAKE by Peter Ackroyd Sinclair-Stevenson, Â£20, pp. 399 I n any biography of a neglected genius, the people who come off worst are those of the man's...

The professor and the flower

Jane Gardam THE BLUE FLOWER by Penelope Fitzgerald Flamingo, Â£14.99, pp. 225 'Novels arise out of the shortcomings of history' is the epigraph by Fritz von Hardenberg of this...

The stranger after the funeral

Isabel Colegate HIDDEN LIVES: A FAMILY MEMOIR by Margaret Forster Viking, Â£16, pp. 308 G uth is a common legacy of parents. We remember their last sad years and for- get the...

`Hold on,' she said, 'I'll just run out and get him. The weather here's so good, he took the chance To do a bit of weeding.' So I saw him Down on his hands and knees beside the...

Twisting the knife away

Penelope Lively YESTERDAY IN THE BACK LANE by Bernice Rubens Little, Brown, Â£15.99, pp 247 A s an admirer of resounding opening sentences I warmed at once to this: 'My name is...

One great moment, one great line

Norman Stone LIFE SENTENCE by Hartley Shawcross Constable, Â£20, pp. 346 N ostalgia for the Fifties is in order. You could rent a flat in Hampstead for Â£3 per week, the...

Two faces at once

John Fowles THE PRESTIGE by Christopher Priest Touchstone, Â£15.99, pp. 404 T he literary world has grown so clever that to call a novel a good yarn would evoke distaste at...

Putting in the bits he left out

Willis Hall STREETS AHEAD by Keith Waterhouse Hodder, Â£16.99, pp. 247 A nyone must needs be barking mad that could imagine I might risk jeopardis- ing a writing partnership...

The play's the thing wherein I'll catch the conscience of

. . . Harry Mount MORALITY PLAY by Barry Unsworth Hamish Hamilton, Â£14.99, pp. 192 T he greatest problem of the novel set in the past is to get the conversation right. Do...

The dominion of the family

Hilary Mantel O ne of the first difficulties in writing about Ivy Compton-Burnett is how to refer to her â how to deal with a name which breaks the rhythm of any sentence,...

M us ic Let's hear it for Harrison Robin Holloway acclaims Birtwistle's primeval inspiration T he closing span of this year's Centenni- al Proms has been distinguished by pre-...

Apollo (`13', selected cinemas) Skewering the moment Mark Steyn I can dimly recall watching the progress of NASA's ill-fated 1970 moonshot on TV â or, at least, I dimly...

Too many aliens Ian Hislop S unday evening is already compulsory viewing because of the consistently excel- lent The Death of Yugoslavia (BBC2, 9.10 p.m.). But for those who...

Sleeping around Gavin Stamp C ars represent individual freedom while trains and buses are socialist and collectivist. That, at least, is what purports to be the thinking...

Thanks Air Engiadina Taki A though it is out of season, Gstaad has never been more pleasant. The weather has improved, the towelheads have gone back to eating their dates in...

Missionary services Jeffrey Bernard T he sum total of trivialities that go to make up my life as it is at the moment don't fill me with self-pity; I have learnt to revel in...

Blackhead humour Carole Morin S tupidity is a powerful weapon. It's not the mobile phones that make me want to commit suicide, it's the conversations you're forced to listen...

Heirs to The Land Nigel Nicolson T he Peking manifesto on women's rights insisted that sisters should benefit with their brothers from whatever their parents bequeath to them,...

Can you count? Andrew Robson THE GREATEST breakthrough to one's bridge is acquiring the ability to count and thus to reconstruct the hidden hands. I rec- ommend short cuts:...

EVERY WEEK restaurants open. Not all do well, and even

those which do well enough often never really emerge from obscurity. I don't know quite what it is that makes certain restaurants become talked about, become not merely places...

Cunctator Raymond Keene THE FIRST SIX GAMES of the KasparovâAnand World Championship match in New York have ended in draws. Many experts before the match predicted that...

A first prize of Â£25 and a bottle of Graham's Late Bottled Vintage 1988 Port for the first correct solution opened on 9 October, with two runners-up prizes of Â£15 (or, for UK...

Magic moments Simon Barnes HOW LESS than extraordinary, I thought, ripping the Jiffy bag open over the Lavazza: a book. In the Zone, read the title, unamaz- ingly enough. But...

Dear Mary.. . Q. A neighbour of mine in the country is having a dance in a few weeks' time and I have offered to have a number of people to stay. My eldest son has informed me...