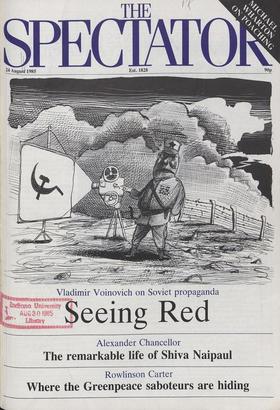 BULLYING BOTHA A South African visitor to this country had predicted to us that so far as satisfying demands for fundamental reform of the apartheid system was concerned,...

WHO can deny, looking around Britain, that we have far too many architects in this country (the RIBA alone has 23,000 mem- bers) and most of those are badly trained and crudely...

VALERIE GROVE T he character of Menorca is that of a windswept and melancholy place, not un- like parts of Cornwall.' It is partly by such candour that the island of Menorca...

Home thoughts from abroad: time for a general call to arms AU13ERON WAUGH hortly before leaving for a holiday in France, I wrote a leader page article for the Daily Mail in...

Vladimir V oinovich on the way Russians learn to believe the opposite of what they are told ABOUT 15 years ago, when my wife and I were driving back to Moscow from the Black...

WHERE THEY FLED FROM AUCKLAND

Rawlinson Carter uncovers a secret French island in the Indian Ocean INTERNATIONAL warrants have been issued for the arrest of three non- commissioned officers of the French...

A STATE OF COERCION

Peter Kemp finds Nicaragua on the road to self-destruction ON DISEMBARKING at the airport of Managua, the capital of Nicaragua, the traveller finds in the Customs hall a...

s p E c nr o R Subscribe NOW and save up to 25% on the retail price (equivalent to 3 months FREE) Subscription rates are being held at the old price for a limited period...

Richard Bassett sees the Prime Minister at a concert, and wonders why she is so fond of Austria Salzburg EIGHTY-SIX degrees in the shade. The orchestra wielding varnished wood...

WITNESS AT THE DOOR

Roy Kerridge watches Jehovah's Witnesses being baptised by total immersion Twickenham WHETHER you are enjoying a bath, anxiously waiting for a loved one to call or trying to...

The case of 'Hillman v. Crosskey,' which has just been tried at Lewes, brings out the defects of the existing Lunacy Law in a way which is all the more striking because of the...

Alexander Chancellor pays tribute to an exceptional writer IF, LIKE me, one has never been to Trinidad, and perhaps even if one has, it is extremely difficult to imagine the...

Peregrine Worsthorne remembers a beautiful, mischievous rebel IN THEORY everybody is unique, but in practice some are more unique than others and Vanessa was certainly that, as...

The Spectator is establishing an annual prize in memory of

Shiva Naipaul, the details of which are still to be worked out, though it will be awarded to a young writer. In addition to our contribution, we would welcome whatever sums...

Broadcasting: resistance to supervision ONE of the weaknesses of modern British society is the very widespread assumption that a compromise is always preferable, morally and...

Europe is unjust to blame its problems on fiendish Orientals. By Michael Fry 'LAST year Japan had a balance of pay- ments deficit of $20 billion.' That is not a quotation from...

Sir: Help! Spurred on by Peter Levi's review of the selected poems of Charles Johnston (Books, 20 July), I tried to order a copy from Waterstone's in Kensington High Street. I...

Sir: Taki gets more wrong in one sentence than I thought possible. Writing from Zante about Cervantes he observes: 'The Spanish writer lost his leg off the western coast while...

Sir: Your leading article, 'A weakness for terrorism' (10 August), draws a false para- llel between the presentation of IRA poli- cies on television and the broadcasting of...

Sir: It might surprise Paul Johnson (The press, 17 August) that some homosexuals are upset that their friends and acquaint- ances are liable to die in the next few years with an...

Sir: I have always assumed 'nail' (Diary, 10 August; Letters, 17 August) to be a cont- raction of the acronym 'Naafi' from world war two. Anything supplied by that organ-...

Sir: Many of your readers will applaud the rebuke Mr Conrad M. Black has directed at the inferior quality of Spectator report- ing of American affairs (Letters, 10 Au- gust)....

Christopher Fildes is on holiday.

20 July) amounts to his saying that, he will only accept what he finds intellectually satisfying. But that is not an act of faith; it is an affirmation of his own 10 — a rather...

Sir: I must take exception to Christopher Hitchens's article on Canadians in the 3 August issue of your magazine. He has neglected to mention the most important failing of the...

Sir: With regard to your recent price increase, I am writing to thank you for saving me a considerable amount of money. My fiancée, who until now was most suitable, demanded to...

Sir: What point is John Martin Robinson trying to make (Letters, 17 August) by saying that Titian's painting of the Assumption ante-dates 1950? There are many pious legends, of...

Sir: We are pleased to see the Spectator recommend that its readers should no longer travel by rail (Leader, 10 August). Since most of the money needed to run the trains now...

Sir: The best-known Romanian political prisoner, Father Gheorghe Calciu- Dumitreasa, has now been allowed to emigrate, after 22 years in Communist jails and one extra year under...

Sir: Our local Historical Society recently visited the site of a Boer War battle at Modderfontein, Eastern Cape, where a commando under General Smuts routed a group of the 17th...

A proper study Laurence Lerner ALEXANDER POPE: A LIFE by Maynard Mack Yale, £15.95 W hen Alexander Pope died in 1744 he had long been England's leading poet. As a Roman...

Game for a fight in the country

Michael Wharton THE LONG AFFRAY: THE POACHING WARS IN BRITAIN by Harry Hopkins Seeker & Warburg, £12.95 T here is no doubt which side the author is on in this fascinating,...

The tail-coated banqueting maitre d'hotel Proffers a napkin round potato crisps. I wave the thing away, but later think That they were very likely rather good, Far above even...

Francis King STONE VIRGIN by Barry Unsworth Hamish Hamilton, £8.95 T hough tempting, it would a critical cliché, and also not wholly accurate, to say that this remarkable...

Getting to know the field marshal

Brian Masters MONTY AT CLOSE QUARTERS edited by T. E. B. Howarth Secker, £10.95 T he biographer faces daily engulfment by the mass of material strewn over his desk. The...

Giles Auty EDWARD BURRA by Andrew Causey Phaidon, £60 F rom childhood I have vivid recollec- tions of a book of stories illustrated by Aubrey Beardsley. Whether this was a...

Mirabel Cecil WELL, DEARIE! THE LETTERS OF EDWARD BURRA edited by William Chappell Gordon Fraser, £14.95 W ell dearies if you want a Fart History full of insaytes into the...

When our local football team Weekly defeated father's spirit, Father and I took to the hills, Drew comfort from their greater merit. It made my childhood less banal, As did my...

Dreaming of a white treasure-house

Adrian Berry ANTARCTICA: THE LAST GREAT WILDERNESS by Stanley Johnson Weidenfeld, £12.95 I t is a sad fact that while Antarctica is perhaps the most exciting continent on...

The butcher emerges as a bloody hero

Alan Bold For centuries the butcher served as a symbol of savagery, a man whose blood- drenched business condemned him as sub- human. Cardinal Wolsey was ridiculed, in an...

Theatre The Daughter-in-Law (Hampstead) Are You Lonesome Tonight? (Phoenix) Seeing is believing Christopher Edwards I am sure we are sick of the rather bony bloodless drama...

Brewster's Millions (PG', selected cinemas) The latest of the big spenders Peter Ackroyd I n an entertainment industry which is (inevitably) established upon the glamor- ous...

Reflections of reality? Peter Levi T elevision sets are getting to look old-fashioned. Ours has the moping, dog- ged air of an antique wireless, it is like a disregarded minor...

Fly in the ointment Taki hen Aristotle Socrates Onassis won the right to own Olympic Airlines in the early Fifties, the man who lost out in the bidding was none other than my...

High and dry Jeffrey Bernard I bumped into an old mate of mine, Bill, the other day whom I was banged up with in 1972 in St Bernard's Hospital. He's on the dry now but he told...

Fire and water Alice Thomas Ellis T he sky may not be blue but the air is quite a pretty shade. We are having a new stove installed which involves much bang- ing out of stone...

Queer trades Jaspistos I n Competition No. 1383 you were asked to provide two additional stanzas to the song which the White Knight sings to Alice in Through the...

Winning the big one David Spanier I mportant games in chess live on, as artistic creations in their own right and as turning points. Chess players recall them, as one may from...

Imperative Cooking: a call to responsibility

3. 4 • I inINUALimPLOL OAL".,„",impLi ' " I AM worried about the little ones. Even those Spectator readers who are not parents may well be godparents, uncles, aunts or...

A sonnet, please, bidding an unfond farewell to this summer. Entries to 'Com- petition No. 1386' by 6 September.