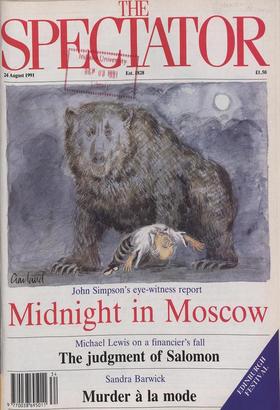 U nemployment was found to have risen in July by the biggest amount on record. The Bank of England thought that the recession was bumping along the bot- tom. Inflation fell to...

MATTHEW PARRIS A new survey confirms what we know already: that, among providers of public services, local government is the most hated. So how has the myth arisen that town...

If it's goodbye to all that, it should be goodbye to Gorbachev too CHARLES MOORE t is worth reading the 'appeal to the Soviet people' broadcast by Moscow Radio and composed by...

John Simpson witnesses the development of the unrest in the Soviet Union Moscow's Tiananmen Square is the part around the Russian parliament overlook- ing the Moscow River and...

Tony Samstag on the threat to the Nordic alphabet Oslo A NICE woman from the BBC World Service telephoned my home in Oslo the other night to ask me about some Rumanian gypsies...

THE JUDGMENT OF SALOMON

Michael Lewis on the fall of the man that he once worked for WE MAY never be told the truth about what happened at Salomon Brothers over the past few years. I'm not even sure...

NOW that almost every soldier who enlisted in the armies of the Union and suffered even from a cold in his head has been pensioned, the Republican Party are looking out for some...

Sandra Barwick on changing fashions in the reporting of fatal crimes IT IS early Monday evening, some months after the conclusion of the Gulf war. The tube train is hot, full,...

A woman reader received the following letter: Facing you in the driving seat is an array of warning lights which alert you to a range of motoring emergencies. The only one...

TEN TALENTS OF A BOOKMAN

The press: Paul Johnson pays tribute to a notable literary editor THE DEATH of Terry Kilmartin rings down the final curtain, I suppose, on that golden age of British literary...

persist.. . THIS IS a love story, of a kind. It con- cerns an Indian immigrant, who gave up university at home to drive a bus in this country. He married shortly before he left...

or over Â£30 on The Spectator If you're forced to share The Spectator with fellow students, then you'll know how difficult it can be to track a copy down. Now you can save...

Sir: In your issue of 3 August, page 18, Gavin Stamp claims 'all staff in English Heritage were recently issued with a mem- orandum instructing them . . . never to talk to...

Sir: I was astonished by Janine Di Giovan- ni's account of the Jesus Fellowship Church and the Christian community which forms a major part of the Fellowship (`Jesus lives in...

The facts of death

Sir: When I wrote in my review (27 July) of Sir Robert Rhodes James's Bob Boothby of his unscholarly fantasies about Lord Ran- dolph Churchill I added that these were accepted...

Sir: Mr Michael Lewis, like many another foreigner before him,

has got it all wrong in his remarks about the British character. What he mistakes for rudeness is in fact apprehension at the prospect of meeting someone from a country where...

Sir: In Michael Lewis's article on American Anglophobes (17 August) most of his examples of British bad manners expose the British upper middle class as the offenders. I believe...

Sir: Your ingenious colleague, Jaspistos, reveals himself in one respect a nincom- poop. 'And since y is a consonant...,' he wrote, instancing Dalrymple (Competition, 6 July)....

In an article entitled The Royal Con- fidants (`Rory Knight Bruce attempts to discover which members of the royal family help the gossip columnists') published on 13 July 1991,...

Noel Malcolm and Christopher Fades are away

The rights of tyrants

John Jolliffe THE ITALICS ARE MINE by Nina Berberova Chatto, f20, pp. 600 T o the Russians, time often seems to mean nothing, except for time remem- bered. The memories of...

Looking after a few poor bastards

For want of a Niall

Garry O'Connor NIALL: A LAMENT by Sean O'Casey Calder, Â£14.99, pp. 96 ou are my bowels within' â ?Winne estigh thu' â Gaelic mothers used to say to their babies. When the...

But then he came from a bad family

All we can build is built on love And everything we deconstruct Is merely an attempt to prove That every flower is better plucked BY US â professors, Ph.D.s, And all who think...

The novels of B.S. Johnson

Jonathan Coe T he end can't come quickly enough for me,' wrote B.S. Johnson in the closing pages of his second novel, Albert Angelo. In 1973, some nine years later, he...

Her tunes were vamped through lipstick, played to show The child I was just how to suck and blow Enough to turn a tinny doh-re-mi Into a broken-hearted melody, The quaver in her...

Festival music Good, solid middlebrow stuff Rupert Christiansen suggests it is time for something completely different H aving suffered a bashing in the press over the last...

Cosy chats with Ely and John Anne Smith finds the tents in Charlotte Square a little stuffy this year Q ueueing for the Jilly Cooper show, an excited mother remarks to her...

Haute culture James Knox tours the wide horizons of Scottish taste on show in Edinburgh ashion note: Art as in tartan dominates the catwalk at this year's Edinburgh Festi- val...

The music of sound Robin Holloway adio Three has never been devoted solely to the sound of music, and under John Drummond's controllership the amount and calibre of spoken...

Singing out John Henshall on the still thriving folk music tradition of East Anglia I n his late teens, John Howson spent Sat- urday nights in Liverpool at the 'Mersey- side...

Vesper bells Peter Phillips R achmaninov's Vespers have long been recognised as a high point in the repertory of a cappella vocal music. They are in one sense the highest...

A piece of toast Alistair McAlpine A ugust is the month when the art world takes a holiday: this year, I suspect, at Brighton, not Beaulieu-sur-Mer. As dealers sit on that...

Harriet Waugh will be back next week.

The day the lights went out Martyn Harris T he news reached John Major at 5 a.m., straight from Radio Moscow, so of course there wasn't a word in the newspapers. Front pages...

Don't send flowers Taki Gstaad My informers tell me that many big shots are pissing bullets, as they say. Gutfreund knows a lot, and if he's cornered he will sing. But one...

Out of stock Zenga Longmore 0 malara is playing amongst the fuch- sias and the shamrocks. A sheep Baas hauntingly from the next field, otherwise all is still. I am sitting at...

The Wedge and Beetle IT HAS become quite the thing, these days, to single out for praise those restaurants which do not treat a child as if it is a gone- off pork chop. I have...

Adventures of Nigel Raymond Keene R eaders will remember that last week we left Nigel Short's bid to qualify from the quarter-finals of the world championship candidates...

12 YEAR OLD SCOTCH WHISKY Logodaedaly Jaspistos I n Competition No. 1690 you were in- vited to write a poem with a lavish use of rare words, entitled either 'Sunset' or...

A first prize of Â£20 and two further prizes of Â£10 (or, for UK solvers, a copy of Chambers English Dictionary -- ring the word `Dictionary') for the first three correct...

Please provide a company song for The Spectator or some other newspaper, re- flecting its corporate identity. Maximum 16 lines. Entries to 'Competition No. 1693' by 6 September.

Another country Frank Keating THE England footballer, David Platt, this week told the Guardian's Rome correspon- dent that he was settling down well in Italy after his Â£51/2...

Q. Your suggested method for dealing with doorstep collectors for charity was clever (`There's no one in, I'm just clean- ing up here') but for my part I find the...