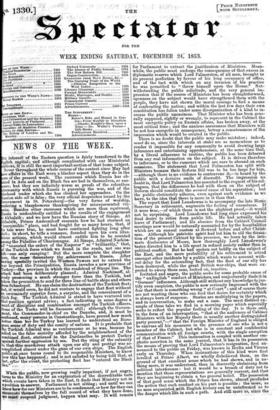 interest of the Eastern question is fairly transferred to the lish capital; and although complicated with our Ministerial tions, it is still the most important section of that...

When the public, now growing really impatient, if not angry,

urns to the Ministry for an explanation of the discreditable turn vluch events have taken in the East, it finds that Ministry not in Tosition to answer. Parliament is not...

The ftrst message of President Pierce to Congress has attracted

unusual notice, in America and England, for the sobriety of its langtige. Preposterous attempts had been made, in the United States,-tot up an expectation that it would almost...

The City Commission have now adjourned the inquiry until the 11th January. Their last sitting was held on Tuesday. Mr. Samuel Hopwood, clerk to the Commissioners of Paving in...

THE Quasar, Prince Albert, and the Royal children, left Osborne on Thursday morning, and arrived at Windsor Castle; where the usual Christmas festivities will be kept. Prince...

The moving of society towards a truer education is shown,

not only in sectional or official " movements" under that name, but in the spontaneous action throughout the entire country. Scotland has already exhibited signs of desiring to...

The long-announced Conference of gentlemen interested in the preven- tion of Juvenile Delinquency, by means of Reformatory Schools, was held at Birmingham on Tuesday ;...

Without any opposition, or even a show of excitement, Mr. John O'Connell was elected for Clonmel on Wednesday. The new Bishop of Derry and Rapboe was installed on Monday...

The society for the Vindication of Scottish Rights held a public meet- ing in the City Hall of Glasgow, on Thursday the 15th ; Mr. William West Watson, senior Bailie of Glasgow,...

FRANCE. —The Journal des Debats has caused a sensation this week by publishing some important documents connected with the recent diplo- matic proceedings in the East. Those...

The late Cabinet Councils have been remarkable for the length

A telegraphic despatch from Trieste, imparting a brief summary of

the contents of the overland mail from India and China, arrived in town last - night. The latest dates are from Hongkong the 11th, and Bombay the '28th November. "Accounts from...

re- strain the Reverend Francis Morse from performing divine service in the church of St. Mary Shrewsbury, or from reading the Articles therein, or doing any act by virtue of...

SATURDAY. A week has passed without any apparent progress in appointing a suc- cessor to Lord Palmerston in the Home Office. At the close of last week it was anticipated that...

The week before Christmas is always a dull one, and

Mark Lane seldom forms an exception to the rule, _There was, however, a pretty fair at- tendance yesterday, and a large amount of business would have been transacted had prices...

A number of telegraphic despatches are published this morning. From

St. Petersburg we have an illustration of the complacency with which the Emperor Nicholas looks upon his naval success, in the shape of an autograph letter to Prince...

STOCK EXCHANGE, FIUDAT Ai ryas 00E. The tone of the foreign intelligence this week regarding the Turkish ques- tion has not been of a pacific nature, and opinion daily becomes...

The annual report of the Secretary of the Treasury, Mr.

Guthrie, had been printed. It derives its main interest from the fact that it propounds the Government plan for the revision of the tariff In the first place, the list of free...

A deputation from the. Town-Council of Windsor waited upon the

Ecclesiastical Commissioners on Thursday, to complain of certain mis- -appropriation of the revenues of the Chapel Royal of St. George at Wind.- eor. Mr. Darvill, as the...

A correspondent who shares use vexation at the obtrusive bad

taste of the Challis Statue project, points out some contrasts in the amount s subscribed to that compulsory fund and to the voluntary Newton fund, Lord John Russell, who thinks...

Mr. Burford has again seized occasion and the public by the forelock, with a view of Constantinople, just opened at his Panorama—in time for the war in the East and for the...

Considering that "Boxing-day" is the New-Year's-day of the year theatrical, and consequently that this may be looked upon as the last day of the Old Year, we may not...

The reappearance of Mademoiselle Georges at the Theatre Francais, on the occasion of her own benefit, which took place on Saturday last, created an immense sensation in Paris....

TOPICS OF THE_ DAY.'

LORD PALMERSTON AND THE MINISTRY.

IF only for a nine-days wonder, there is much gossiping upon the causes and immediate effects of Lord Palmerston's retirement from the Cabinet—all the more, perhaps, because the...

IT is not with indifference that true Englishmen receive intelli- g ence of the modern progress of rational liberty in the land of the Waldenses. Piedmont has not only shown...

Tim winter threatens to present the Poor-law Commissioners with one of those difficulties which they have oftener evaded than sur- mounted; and this difficulty was brought to a...

THE Austrian budget for 1854, it is announced from Vienna, shows a serious deficit, somewhat falsifying the anticipation of friendly writers who had anticipated a diminished...

Oxford, December 19. Stu—I can assure "A Resident Fellow" that the Moderate party in Ox- ford entertain no superstitious horror of a "moustache," and that it would not faint...

THE ABUSES OF PUBLIC SCHOOLS.

Sin—The school to which I alluded is Harrow. The " Decemvimte" are the ten monitors, who have the power of inflicting corporal punishment on all their schoolfellows below the...

THE BISHOP OF LONDON AND HE. 31117HICE. 2011s December 1853. Sra—A paragraph in the Postscript of your last number suggests an in- quiry as to the part taken by the Bishop of...

17th December 1853. Sin—With allusion to the articles which have lately appeared in the Times and Morning Chronicle, as well as in your own columns, relative to the " New...

Srn—The observations in your paper of 17th December under the bead of "Sydenham Palace Organ," appear to invite the support of musical experi- mentalists. Before determining on...

THE CARRYING TRADE OF THE WORLD. For two years we went backward, and in the last of the four we were no farther on than we had been in 1845. The average of these four years,...

LADY WIT.I.TBLEY.—Of this lady, whose death - is recorded in the obituary for the past week, Moore has a notice in his Diary. "Lady Wellesley be- comes her station admirably....

CHINESE EMIGRATION TO THE WEST INDIES.

Next to the emigration from Ireland and Germany during the last few years, the most remarkable movement of any portion of the human family is that which has lately begun in...

On the 19th October, at Sylhet, Bengal, the Wife of Colonel Finnis, Thirty-eighth Regiment Light Infantry, of a daughter. On the 2d November, at Bawul Nodes, in the Punjab, the...

County of Middlesex, Printer, at the once of Jossra Co.sxros, No. 10, Crane Conrt,.Inihe Parish of SI. Dun- stan . s In the West, in the City of London; and Pnbusned by the...

BAKER ' S RIFLE AND HOUND IN CEYLON. * Tox sportsman in describing his sports generally does it with fluency and vigour, if not with a touch of imagination. It may be that the...

CHARLES KNIGHT'S ONCE UPON A TIME.*

THIS varied, pleasant, and, what is not always the case, informing collection of essays, is in part a selection from the writings of a • Once upon a Time. By Charles Knight. In...

FROM MAYFAIR TO MARATHON.*

T I LE affectation of point which is visible in this title is found too pervadingly in the book, mingled with something of levity or flip- pa ncy, and a tone of moralizing that...

DR. WALLER'S POEMS.* Wrrn many of the qualities of a

poet, Dr. Waller frequently neu- tralizes the effect of his powers by prolixity of treatment if not ex- actly of style, or by too little care in his selection of a subject....

TILE volumes of the nature of gift-books which come before us in the Christmas week form a lot miscellaneous enough ; in art, of some appa- rently solid pretensions—in...

Boons. Memoirs, Journal, and Correspondence of Thomas Moore. Edited by the Right Honourable Lord John Russell, M.P. Volumes T. and VI. The Speeches of the Duke of Wellington in...

FREDRIKA BR Aran's APPEAL FROM HER TRANSLATOR.—Miss Fredrika Bremer has

published "A Card," setting forth a certain protest which she feels bound to make against "misconceptions as to words and meanings of the Swedish original" of her Homes of the...