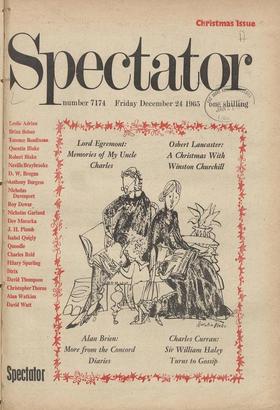 - -Portrait of the Week— THE SONG the herald angels sang

could be heard amid the general discord, but often only faintly. Britain turned the screw on Rhodesia tighter still, by announcing oil sanctions forthwith, the Tories retaliated...

Vale LAIN MACLEOD • Memoirs of an ex-Businessman COLIN MACINNES One year's subscription to the 'Spectator': £315s. (including postage) in the United Kingdom and Eire. By...

The Politics of Plane- We have not thought it right to comment on individual projects whether already in the pro- gramme or under consideration. Assessing and judging the...

Mr. Wilson at the Circus DAVID WATT writes : I have seen Harold Wilson four times since the general election and each time with a greater sense of optical illusion. The first...

Katie Gives Him Socks By CHARLES CURRAN f G 113101:1AR is about to fall; the white flag is going up over the Kremlin; Mr. Harold Wil- son wants to join the Carlton Club. In...

Talks on the wage claim were adjourned..Con- versations with Mr. Taylor are to be resumed at the Ministry of Labour after dinner this evening.— Newspaper report. Under a wide...

Restoring the Churches From DEV MURARKA MOSCOW E V ER since we moved to my new apartment by Moscow river, opposite the Gorky Culture Park, we have been fascinated by the...

Troubles to Come? HARRY FRANKLIN writes from Lusaka : 'It must,' writes one of my sources of income from journalism, 'be a fascinating time in your part of the world right...

Mr. Brown Does Too Much By ALAN WATKINS M R. GEORGE BRoWN would cut a dashing figure—in Regency costume, possibly?— in one of those jolly Christmas cards, all holly and punch...

The Last Refuge By OLIVER STEWART S OLE remaining haven from the turbulent seas of aviation politics, the Royal Aeronautical Society, the first aeronautical society in the...

Kipling: A Celebration in Silence

By ANTHONY BURGESS le Prim Kipling centenary is passing as quietly c. as the paws of a fieldmouse whisker- twitching through the grounds of a Bateman's Which seems to dream—so...

after all, chastened and subdued by the experience perhaps, but I doubt it. His position in European negotia- tions should if anything now be rather stronger. No one is better...

Watch that History 'History is being made today.' (Mr. Georg

Brown on the signature of the Statement Intent, December 16, 1964.) On December 16, 1965, it was announced th prices and wage rates had each reached ne t historic heights....

Here is a pretty, moral tale for Christmas. to colleague

was charmed to find among his Chris in mas cards an uncommonly civil one from , r9 Gas Board, which said: 'A representative cal be on Monday for the purpose of'—here somethi ki...

T HERE is more joy in the House of Commons over one sinner who repenteth, etc. So when the Chancellor of the Exchequer announced, in effect, that his decision to stop the...

Nine Just Men I suppose we are all guilty of

believing our wishes over Rhodesia. Those who wrote to the papers last week to dilate on the strength of moderate white opinion in Rhodesia picked a poor day. The papers also...

On Record Homage to T. S. Eliot, arranged by Vet

Lindsay at the Globe Theatre in June, must ra as one of the memorable events of the yea Groucho Marx gave the Fiend of the Fell wi bloodcurdling Marxist interpolations of his ow...

One-Man Band The Daily Telegraph describes as 'a flattering story'

The Great Storyteller Somerset Maugham had lived out the lives

Memories of Life' in the Grand Manner at Petworth By LORD EGREMONT ( - NNE of my favourite dining-rooms at Petworth esmemories of dinners which I enjoyed there with rdi"I...

A Yuletide Long Ago

(The diaries of Lazarus and Cain Concord, like those of Edmond and Jules de Goncourt, were originally intended only to be published twenty years after the death of the surviving...

SIR,—The answer to those who question the need to a defeat the illegal government of Rhodesia—what- ever else we may think about it—is that we have to. If we do not act...

SIR,—In his review of M. Henri Fluchere's book on Laurence Sterne, Mr. Tony Tanner makes a con- troversial point. He says that Sterne is less popular in England than elsewhere,...

SIR,—On November 19, 1965, you published an article alleging that South Africa had spent £6,000,000 on the South West Africa case currently being considered by the judges of the...

is right in think- y ing that farmers are Conservatives 'almost to a man.' Of the half-dozen farmers whom I count among my friends in this neighbourhood, one voted Labour at the...

Sla,—The contribution by John Allegro on the Dead Sea Scrolls makes fascinating, but very dis- appointing, reading. I fear that anyone who is casually interested in the Scrolls...

Issues Raised by the BPC Affair

Our issue of December 10 contained as an adver- tisement by the Sunday Telegraph a reprint of an article by their City Editor ,Kenneth Fleet which had been published in that...

Lhude Sing O N the notion, inbred and unrepented, that everyone should take in a Messiah before Christmas, I shoehorned myself into a packed Festival Hall and found John...

Tudor Top Drawer T HERE'S a stretch of Tudorbethan portraiture between Holbein and the miniatures of Nicholas Hilliard and Isaac Oliver which is usually regarded as one of the...

Ability Paxton J OSEPH PAXTON, the designer of the Crystal Palace, is one of those electric early-Victorian figures who spring to life at the slightest provo- cation. There he...

By D. W. BROGAN I T is a solemn thought, or, at any rate, it is an occasion for reflection, that the New Republic and the New Statesman are just of the same age. Each now is...

Where the Girls Are

Five Women. By Tony Parker. (Hutchinson, 25s.) Talking to Women. By Nell Dunn. (MacGibbon and Kee, 21s.) Your licence after a sentence of Corrective Training says you must lead...

Tuts is a slightly expanded version of the 1964 Ford Lectures on English history delivered in Oxford, an annual, and by academic standards well-endowed, series which has...

The Hound and the Falcon. By Antonia White. (Longmans, 30s.) ANTONIA WHITE'S new book is subtitled 'A Story . of a Reconversion to the Catholic Faith.' But it is far more. It...

IDEALLY, books about the past should extend in depth the fascination of books about abroad. Ideally, they should also help to explain, even when they purport to offer a mere...

THE appearance of the second volume of A. J. Marder's From the Dreadnought to Scapa Flow (O.U.P., 60s.) is an event of the greatest impor- tance for all students of naval...

THE Stuarts have had a wonderful run for their money these last thirty years: Shaw, Feiling, Bryant, apologists all for the pedant, the martyr, the rake and the bigot. Whatever...

Mits. Leavis's book was required reading in my student days, along with the scrutineering of `F.R.L.' (its dedicatee), the works of I. A. Richards, Seven Types of Ambiguity,...

Annus Horrendus In. Urbe By NICHOLAS DAVENPORT TN the forecourt of the remarkable new Roths- 'child ollice in St. Swithin's Lane (which no student of modern architecture...

Fixed Abode By STRIX `Are you still living at N—?' Why, I won- dered afterwards, does this perfectly reasonable inquiry always cause me ever so slightly to wince?• It would be...

By LESLIE ADRIAN THOSE lovely cracker .'Why are marriages likely to fail? Because the bride never marries the best man.' Thank you, thank you (75s. the dozen from Hovell and...

By BRIAN BEHAN The bookshops seem fairly evenly divided between the Behans and the Kcnnedys. It is being strenuously denied in Dublin that the late President is to be canonised...

By PHILIDOR 262. Specially contributed by J. G. MAULDON (Corpus Christi, Oxfor.! BLACK (to men) WHITE (15 men) THIS position is the basis of the Christmas competition . see...