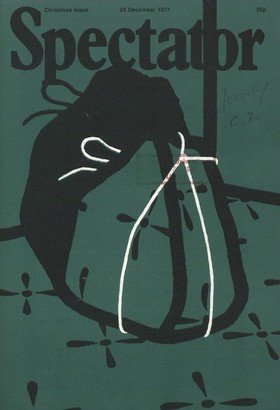 human Library Y . maninetaamtituouvitotmonomr, ' 'On an occasion like this — whether relatives, friends or ac q uaintances — we arc all inspired by g ood feelings towards each...

Jim and the penguins Ferdinand Mount The House has risen for the Christmas recess. Time was when this information would have sent a ripple through the nation. Think how...

Elsewhere in this paper (on page 16) our Greek columnist Taki, whose surname is very hard to remember, discusses the misfortunes of jet-setters who feel obliged to spend...

Roman holiday Auberon Waugh Rome On Monday night, they decided to hold a riot in the centre of Rome. Molotov cocktails were thrown into a bar, a few cars were stopped at...

In a week short of newspapers and magazines, the Spectator will appear as usual. Don't miss our New Year issue which will be published on Thursday 29 December. galloped it for...

To be a pilgrim

Patrick Cosgrave Jerusalem To be in Jerusalem at Christmas is, for a Christian, a definitive experience. It is also an odd, perhaps even an eerie, one. Run down the road to...

Sam White Paris A few books published in Paris this year have helped to clear away many cobwebbed misconceptions about the recent and less recent history of France. It is...

Peter Nichols Rome Some Italians still eat eel on Christmas Eve. Some never did, or have given it up because eels somehow seem out of place in the sort of Christmas the...

Nicholas von Hoffman Washington You can tell Christmas was coming by turning on the television. A soft drinks company had put the words of their advertising jingle to the music...

Richard West In the week before Christmas 1964, I was staying at Bahardar, on Lake Tana, from which the Blue Nile begins its 2,750-mile journey down to the sea. This immense...

Confessions of a mad quiz master

Christopher Booker In my own quiet, wonderful, unique way I am going to enjoy this Christmas more than any of you — because after eight secretly tortured years I have at last...

Philip Hope-Wallace I think I must be incurably lazy, or obtuse, about failing to understand colloquial North American expressions. It has been explained to me patiently what...

Far from home TA! Christmas is here and while millions celebrate the birth of Christ by spending quiet and restful holidays at home, giving thanks for their blessings and...

Sir: Your editorial (10 December) on the restoration of free speech by the National Union of Students was slightly misleading. The impression it left was that the so-called...

In defence of dogs

Sir: After reading Geoffrey Wheatcroft's attack on dogs (Notebook, 10 December), I consulted an expert, our local road sweeper. He assures me that most of the filth he sweeps up...

Sir: Ferdinand Mount (26 November) is wrong in saying that the English don't care about devolution. In fact most of those I have spoken to are enthusiastic about the idea of an...

Sir: George Gale is to be commended for perceiving ('How to save the Union', 3 December) that the logical way out of the devolution conundrum is a federal UK involving regional...

Sir: I read with considerable amusement John Grigg's 'media mania'. May I invite the attention of others similarly amused to the following extract from my paper entitled...

Sir: I am sorry that Ferdinand Mount chose to spoil his otherwise droll articleSBallad of Reading General', 10 December) with criticism of Mr Heath's impatience. It is my...

Sir: Whilst not wishing to deny Geoffrey . Wheatcroft the freedom to express his opinionated view of the BBC (Notebook, 17 December) I feel he might do his readers the courtesy...

Sir: Is it not very significant that the owner of the house that Shakespeare bought in Stratford-upon-Avon in 1597, William Underhill, was a kinsman of John Underhill, a...

Sir: So Miss Connell (3 December) claims that Menachem , Begin in his book The Revole(pp 162-165), referring to the battle af Deir Yassin, wrote: 'The massacre was not only...

Hubert Picarda Pressure for reform of the law of charities has come largely from organisations beyond the present charitable pale. It is intriguing, for instance, to discover...

The Browning committee Piers Paul Read There are fashions, even in administration, and shortly after the Conservative government established the Central Policy Review Staff,...

An egoism of state Hugh Trevor-Roper Venice: The Rise to Empire John Julius Norwich (Allen Lane £7.50) In the seventeenth century, when absolutism was the rule and revolution...

Onegin in his own rhyme

Alastair Forbes Eugene Onegin Pushkin Translated by Charles Johnston (Scalar Press £4.50) 'Breeding in a woman, as in a horse, means a lot,' observed Lermontov's Pechorin, that...

Kay Dick The Passionate Shepherdess: Aphra Bann 1640-89 Maureen Duffy (Cape £7.50) Aphra Benn, about whom most of us know practically nothing, is posthumously fortunate in...

Benny Green One of the greatest hardships the Empirebuilders had to endure was the loss of the true English Christmas. It was difficult to find snowgirt robins perched on a...

The unlikely sport of lovers

Ferdinand Mount Golf, you might think, is not a game for romantics. Retired bank managers, redfaced stockbrokers, hustlers in two-tone shoes — these are surely the figures...

Pinch-pots and skateboards John McEwen The last days of a year are always a bit like clambering ashore, but this December, as an art critic, I find myself gliding to rest on...

Anodyne Clancy Sigal Star Wars (Dominion and Odeon Leicester Square) Surprisingly, there is not that much to say about Star Wars (U certificate), Its creator, •...

Too gross Richard ingrams I can't say 1 will miss Melvyn Bragg's Sunday appearances on the BBC. His lengthy tête-à-têtes with best selling authors have become so dreadfully...

Franz Grill parzer The closing year saw the 150th anniversary ofthe death of Ludwig van Beethoven. At his funeral in Vienna in 1827 this oration was given by Franz Grillparzer,...