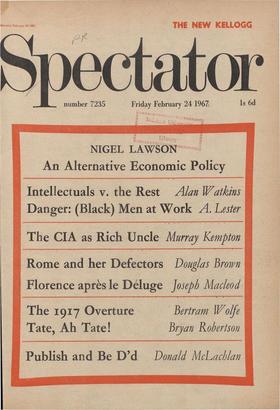 HE High Contracting Parties solemnly I declare, in the names of their respec- tive peoples, that they condemn recourse to war for the solution of international controversies and...

A Conservative's Principles I find it very hard to state

What principles we follow. The old are mostly out of date, The new too tough to swallow. But, if we haven't quite the nerve To sack the little bl"der, Conservatives had best...

POLITICAL COMMENTARY By ALAN WATKINS E l OR some reason, an exercise which is always r fascinating consists in dividing a given group of people into two—never more than two—...

Rome and her Defectors

A TRACT FOR THE TORIES-2 By NIGEL LAWSON I argued last week that, in their politically crucial quest for an economic policy, it is not enough for the Tories to settle for the...

February 23. 1867 The week has been full of rumours about Reform, some of which are more or less trust- worthy. The mass of them point to a course of procedure which may prove...

AMERICA From MURRAY KEMPTON NEW YORK A A ND could even the wildest imaginings of the Bertrand Russell of the 'sixties have embraced the fantasy that the Central Intelligence...

DISCRIMINATION By ANTHONY LESTER A A T the heart of this week's conference on racial equality in employment, held by the Arch- bishop of Canterbury's National Committee for...

HE Government has done well to agree, in I the House of Lords, to drop the stultifying amendment to the Parliamentary Commissioner Bill that would have prevented the Ombudsman...

From JOSEPH MACLEOD FLORENCE T HE floods were last November; the response magnificent both within the city and without. Florence has been recovering ever since, so that though...

'TELEVISION By STUART HOOD H ow much simpler life would be if one's opponents—intellectual or political—were also nasty people. A case in point is Mrs Mary Whitehouse. After...

Publish and be It'd

THE PRESS By DONALD McLACHLAN M HERE is all the difference, as every ordinary I traveller knows, between a spot test and a systematic search. That one bag in twenty should be...

AFTERTHOUGHT By JOHN WELLS THERE was a time, shortly after I had read Huxley's Doors of Perception of Heaven and Hell, when I was rather drawn to the idea of expanding my...

Sut,—Nigel Lawson prescribes economic policy as a cure for the

Tory party's present weakness. Whilst this is sound advice, I do not believe it is the vital factor in Tory recovery.. The greatest factor affecting political fortunes at the...

SIR,-1 suggest that the final proposition in your article 'What's Wrong with the Tories?' ought not to be confined to this context. All people as at present constituted act, and...

Where the Real Weakness Lies

SIR,—Nigel Lawson is probably right in saying the Tories' greatest weakness is a lack of clear economic policy (February 17), though this has lasted for longer than their time...

The Fall of Adam

SIR,—In his attempt to whitewash Adam Clayton Powell, Murray Kempton omits the central fact that the congressman is a law-breaker who is subject to arrest if he ever goes back...

SIR,—On behalf of the Marlowe Society 1 should like to

register our most emphatic protest at being referred to as a 'lunatic fringe' by Martin Seymour-Smith. Surely before making such disparaging remarks about a twelve-year-old...

SIR,—In his deliberate attack on our society your reviewer has made some rash and indefensible state- ments. He claims that among those who question or reject Shakespearean...

How to Choose an Architect

SIR,—I n an otherwise helpful article on 'How to Choose an Architect' (February 17), Mr Michael Manser summarises neatly—and swallows whole—a favourite fallacy of the 1960s; the...

i n HE publication simultaneously of the Tate Gallery's annual report

and a freshly con- ceived guide to the collections is a convenient moment for trying to assess the functions of the Tate, as well as its recent innovations. These have been...

MUSIC O NE of the jolly, corrective things so far about this year's Camden (ex-St Pancras) Festival, which is being run hand in glove with the Finnish Ambassador and other...

Sexless in Gauze Fiddler on the Roof. (Her Majesty's.)—She Stoops to Conquer. (Yvonne Arnaud, Guild- ford.) FIDDLFIDDL ER on the Roof is far and away the ER musical I have seen...

Come Blow Up Your Horne

RADIO By HENRY TUBE R 0 UND the Horne, which has just started a new series on the Light, is well named. It combines a sense of solid virtue—for who would venture round the...

HIM By BERTRAM WOLFE Fr FEE present year marks the fiftieth anniver- I sary of the fateful events in Russia in 1917 that opened the time of troubles in which we still live....

The Cruel Time The Lady and the Little Fox Fur. By Violette Leduc. (Peter Owen, 25s.) To the End of the World. By Blaise Cendrars. (Peter Owen, 32s. 6d.) The End of Something...

Qasida on the Track to Msus

Towards sundown we came out of the valley Along that track Not knowing then where it led to, when we saw The stone circles, the heaped cairns of stone, the stones Arranged like...

By ROBERT BLAKE T HE published version of Professor Plumb's Ford Lectures, delivered in Oxford in 1965, is, as one would expect from his two volumes on Walpole, scholarly,...

THE crime, of course, is the death of Darnley and thus in the title itself the author's solution of the mystery is announced. For Kirk o' Field remains a mystery. Did the...

VERNON WATXINS has always been a rather lonely figure in English poetry. He has never been associated with any movement or involved in any coteries. He is a Welshman who writes...

short Sentimental Journey and Other Stories. By [talc) Svevo. (Seeker

By JOHN BULL A I write, equity prices have begun to crack under the weight of fears that the forth- coming Budget will contain a demand for higher taxes. Nobody can blame...

4H1 100KM/il7 A In E By NICHOLAS DAVENPORT I 1 7 he has had to eat his words, Mr Callaghan must not be chided too severely. He has done his best, but his spending colleagues...

CONSUMING INTEREST By LESLIE ADRIAN J UST what, I wonder, do architects really think about as they sit at their drawing boards de- signing the dwellings for our property-starved...

By CUSTOS O N Monday equity shares had their worst day for five months. The steep rise in Govern- ment spending was a shock to the market which began to imagine that corporation...

SOLUTION TO CROSSWORD No. za6r