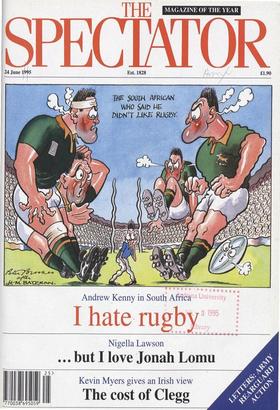 Feeding time. M r John Major, the Prime Minister, flew back from Halifax, Nova Scotia, where he had been meeting other heads of gov- ernment at a G7 conference, and was invit-...

Message to the Tory party: Ken Clarke is Michael Heseltine without the hypocrisy BORIS JOHNSON W ith a long, gibbering wail John Major will finally be defenestrated this...

PETER PRESTON W hy, even in the familiar midsummer depths of vituperation, does one still feel a residual sympathy for John Major? He doesn't seem to have any friends: which is...

When the police are more of a nuisance than assistance AUBERON WAUGH I f I had a weapon on me that night, I would have happily killed the muggers. And be back in jail a la...

A TRIUMPH OF UNREFINED SADISM

Andrew Kenny is one South African who hoped that the cult of rugby would die with apartheid. He is therefore appalled by the success of the World Cup Cape Town ONE OF my great...

"THIS IS very confusing,' I said to my husband over breakfast the other day. `Mrrmph,' he said from behind his newspaper. What I would have told him if he'd been listening is...

A SYMBOL IN SEARCH OF MEANING

Amity Shlaes reports that Germany is a little divided — over the merits of the use of a million square feet of wrapping Berlin WEATHER permitting, the people of Europe will...

I WENT ON a long journey by tele- phone last week. It started with a message in my office on that fiendish modern invention, second in its monstrousness only to the television,...

Robin Harris says that politicians and pundits in the West should admit to the triumph of Bosnian Serb gangsterism WESTERN liberalism is the creed of happy endings. Western...

HOW MANY LIVES IS LEE CLEGG WORTH?

The British press scent success in their bid to free Private Clegg. But, argues Kevin Myers, they may get more than they bargained for Dublin IT IS as if we have been...

ELEVATING MEANNESS TO A PRINCIPLE

Anne Applebaum is puzzled by the British antipathy to paying for medical treatment, and wonders at the reason IT IS about a year ago, and I am telling a disapproving friend...

AN EXCELLENT instance of the rebellious feelings of the Irish peas- antry is given in a story now current in Ireland. A man appeared in Kerry, and gave himself out as a...

Peel, Balfour, Major three Tory leaders stare into the same old abyss CHRISTOPHER FILDES J ohn Major got a break this week and not a moment too soon. He knows that once in a...

Sir: Surely Dominic Lawson's account of the birth of his

daughter must rank as the most moving article that you have ever pub- lished. He writes with such candour as well as love, and is, of course, quite right. It should give us all...

Sir: I write to express the delight all parents of

a Down's syndrome child must feel over Dominic Lawson's courageous account of his reactions to the birth of his new little daughter, Domenica. He has only been the parent of a...

LETTERS The meaning of life

Sir: I have seen your article ( 'All you need is life', 17 June) in which you express your love and joy at the birth of your baby, Domenica, and I felt I must express my...

Sir: Your very moving and honest article has prompted a

good deal of soul-search- ing. Being over the age of 35, my wife has twice undergone the amniosentisis test and on both occasions we acquiesced, quite pas- sively, in these...

Sir: Alasdair Palmer quotes my views ('Prejudices on parole', 10 June) on the undesirability of allowing homosexuals in the armed services, but he then goes on to say, 'As far...

Sir: I have read with interest the article by Dominic

Lawson on his Down's syndrome baby daughter. I cannot agree with his view, however, that the NHS should not offer women automatic abortions when this is diagnosed during early...

Sir: In his article on the armed forces' atti- tude

to homosexuals, Alasdair Palmer makes the extraordinary assertion that `doctors and priests are not bound by the usual requirements of confidentiality and are required to report...

Sir: In his article on the exclusion of homo- sexuals

from the armed services, Alasdair Palmer states that 'many of the greatest fighters and commanders have been experi- enced homosexuals: Alexander the Great Plutarch evidently...

Sir: I genuinely fail to understand how John Ware's article

will be allowed to go unchal- lenged. Forgive me if I am pessimistic that this rebuttal will ever be published, let alone receive the coverage that Mr Ware's did, but then the...

Sir: Alasdair Palmer's article on gays in the armed forces

was superb, the best demoli- tion of the military's case I've yet read. It makes up for all the homophobic drivel from Paul Johnson and Auberon Waugh that Spectator readers have...

Sir: John Ware, in his powerful and pas- sionate article (The politics of parole', 17 June), leaves us in no doubt about the hum- bug of the claim that any decision reached...

Sir: Having recently endured the assault of broadsheet leader columns dictating with a clarity and confidence which is only the privilege of the partially informed, I looked...

campaign in this country omitted one interesting sideshow in this propaganda war. The Serbs have been very generous in paying for British MPs to visit them and our represen-...

Sir: I'm sick of people who swank about not having a television set. They're at every party (Letters, 17 June)! Our nearest lay is three miles away across a muddy field and the...

Consumer boycotts are not democratic. They are just money fighting money SIMON JENKINS T he anarchist's task is to make reason so costly that a ruler opts for chaos. As I...

Agents and patience Anthony Howard FOR THE PRESIDENT'S EYES ONLY: SECRET INTELLIGENCE AND THE AMERICAN PRESIDENCY FROM WASHINGTON TO BUSH by Christopher Andrew HarperCollins,...

Teaching them no end of a lesson

In this garden, after a day of rain, a blackbird is making soundings, flinging his counter-tenor line into blue air, to where an answering cadenza shows the shape and depth of...

As devious as he appeared

Treading rejoicingly the path of others

Anita Brookner A reconsideration of Kazuo Ishiguro's unappreciated latest novel, The Unconsoled T he short attention span of readers and critics in the electronic age was...

Richard Cooper J ust when we thought the cassette was on the way out, the audio book revolution has given our plastic friend a new lease of life. Walk into any bookshop and...

Exhibitions Rites of passage: art for the end of the century (Tate Gallery, till 3 September) Being skinned alive Marina Warner W en did words like 'terrific' and...

Intimations of mortality Robin Holloway C reativity is fragile, vulnerable, often slightly paranoid. The self-confidence of a Rubens is rare; such swagger is more usual- ly...

Silent Fall (`15', selected cinemas) No wriggling this time Mark Steyn A utistics display the following charac- teristics: they do exactly what they want; although their...

Insignificance (Donmar Warehouse) The Suit (Tricycle) Is this really me? Andrew Billen T here is a moment in Terry Johnson's Insignificance when the Marilyn Monroe character...

I think I was there Taki T hear uninvited and uninformed hacks tell it, Svengali has blown into town and mesmerised Trilby. Or Rasputin has arrived to manipulate Sir James...

Crazy name! Crazy guy! Nigella Lawson I t wasn't just the provocation of having someone say to me how curious it must be to be a television critic who wasn't watch- ing the...

Emotional buzz Jeffrey Bernard A ccording to a professor at the Sor- bonne in Paris, the French know very little about the Battle of Waterloo and many of them don't even know...

Darkest thoughts Carole Morin T he thing about London is that you can go up on the roof of your building without getting a vertigo attack. My roof is high enough for a view of...

Yew are heaven Nigel Nicolson S ummer has arrived, and the wet cool- ness that delayed it has had its compensa- tions. As one of the visitors to our garden remarked, 'Bad...

WE HAVE had three good British saints this week. St John Fisher, the Bishop of Rochester, and St Thomas More, Lord Chancellor of England, were both executed for refusing to...

Safety plays Andrew Robson THE IDEA of a 'Safety Play' is to increase the chances of making a contract at the possible cost of overtrick(s). I have seen many declarers go down...

COMPETITION Sandman's song Jaspistos By which I could have meant either a song which makes one drowsy or one which contains advice on how to get to sleep. A good soporific...

Rule Britannia Raymond Keene FOR A NATION whose chess, according to some commentators, appears to be in a `sorry state' (see last week's column) we have achieved some...

A first prize of £25 and a bottle of Graham's Late Bottled Vintage 1988 Port for the first correct solution opened on 10 July, with two runners-up prizes of £15 (or, for UK...

Dazzling defeat Frank Keating There was no mistaking via television satellite, however, that down at the Cape of Good Hope England's mightily optimistic XV had its pretensions...

Dear Mary. . . Q. A couple of years ago I gave a bad review to a book by someone to whom I now discover I need to suck up. She turns out to have had a prolonged relationship...