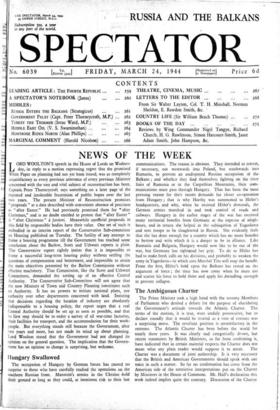 L ORD WOOLTON'S speech in the . House of Lords on Wednes- day, in reply to a motion expressing regret that the promised White Paper on planning had not yet been issued, was as...

The Prime Minister took a high hand with the seventy Members of Parliament who desired a debate for the purpose of elucidating the Government's attitude towards the Atlantic...

The occupation of Hungary by German forces has caused no surprise to those who have carefully studied the operations on the southern Russian front. Manstein's armies in the...

All who care for educational progresi—among them Mr. Butler himself—are in sympathy with the strong body of opinion in the House of Commons which demanded the fixing of a date...

One more stage in the chequered history of the mining industry has been reached with the acceptance of the principle of the Govern- ment's new wage-system and the return of the...

Canada and Control of Aviation The Canadian Government is to

be congratulated on the lead it has given to the nations in preparing proposals for the regulation of civil aviation both within Canada and for the world. Last week Mr. C. D....

Doctors and the Public

Both Lord Woolton in the House of Lords and Mr. Willink in the House of Commons spoke with the conviction of those who have a sound case in the spirited debates on the National...

H OW many months or weeks or days separate us from the opening of a Second Front in Western Europe no one knows except the handful of leaders whose business it is to know. But...

By STRATEGICUS No one could have expected, a week ago, that he would not only have turned the Bug defences but would also have reached and crossed the Dniester. But such was the...

By PETER THORNEYCROFT, M.P. P LANNING without a policy is like navigating a ship without a compass—dangerous alike to passengers and crew. The Government is well furnished with...

By I REN E WARD, M .P . T HE international world is . never without an enigma. Of recent months no country has provided such material- for speculation and " toing and froing "...

By V. S. SWAM1NATHAN A MERICA'S negotiations for oil-supplies for the Middle East raise various political questions, but the concern of a country whose own supplies are...

By ALAN PHILLIPS J AMES GRAHAM, fifth earl and soon to be first marquis of Montrose, was thirty-one when on the twenty-first of March, 1644—three hundred years ago this week—he...

By HAROLD NICOLSON I T is sometimes said that this war, unlike the last, has produced no outstanding poet. I doubt whether this is a correct assertion. The poetry of Sidney...

“Volpone." At the Scala. MR. Wourr concludes his season at the Scala with his production of Ben Jonson's Volpone or The Fox. This full-blooded fantasia on vice and corruption...

ONE of the most curious propaganda phenomena of this war has been the frequent reference by Allied film-makers to the superior efficiency and greater determination of their Nazi...

" A Child of Our Time." Oratorio by M. Tippett.

MUSIC A Child of Our Time ? Say, rather, a child of yesterday. For Michael Tippett's oratorio, performed last Sunday at the AdelPhi Theatre under Mr. Walter Goehr's direction,...

SIR,—Very few Englishmen will disagree with the views of Mr. Wilson Harris. Germany must not be allowed again to disturb the peace of Europe by wanton aggression ; but that does...

THE FUTURE OF EUROPE

LETTERS TO THE EDITOR SIR,—In your issue of March loth you paid me the compliment of dis- cussing critically and at length the suggestions contained in my recent Sidney Ball...

but my letter also suggested means to raise it. Further, if Mr. Brailsford will read the rest of the chapter in my recent boOk (from which he quotes in his own) he will sec that...

Brailsford did make the suggestion, on page 124 of his

book, that the rationing of " strategic " metals might check Germany's ability to use her steel industry for the production of munitions, but only after pointing out, on page...

"Once a country is committed to living by international trade, it is not necessarily going to trade on better terms because it is a country of, say, twenty millions rather than...

should like to refe: to Archdeacon's Synge's letter in your issue March 17th under the heading " Industry in India." It was most structive to hear from such a source of the lack...

Sta,—Your article by L. J. Cadbury does not give the (to me) evident solution to the problem of diminishing population—namely, an increasing cash payment for each child. My...

SIR, —my attention has been drawn to a statement in the editorial columns of The Spectator for March loth, where it is said that the contribution of road transport to road costs...

Snt,—In the March roth issue of your paper, under the title "Rugby School," there appears the statement: "A few local authorities, including the L.C.C., made hopeful starts, but...

SIR,—I do not propose to prophesy on the post-war position of Hong Kong as envisaged by Miss Irene Ward in her article in your issue of March loth. But in fairness to the...

SIR,—Referring to your comments on my letter in your issue of March loth I note that you did not deny the facts given by me regarding the original reaction in England to the...

Sut,In his account of two current productions of Hamlet your

dramatic critic regrets that the part of Claudius the King is not given to a good actor. I should like to remind him of Sir Barry Jackson's production of Hamlet in modern dress,...

DRYNESS, of course, is the most precious quality of March ; but today there is a more ardent cry for rain than for the dust that is " worth a king's ransome." Many wells are dry...

The Facts About Bombing THERE is much more in this book than its title suggests. In support of his thesis—an important one—Mr. Spaight provides his readers with a wealth of...

The Seven Days of Jericho. By Patric Dickinson. (Andrew Dakers. 2s. 6d.) Cain. By Anne Ridler. (Nicholson and Watson. 4s. 6d.) HERE are two poets who have returned to the Old...

The Way Out. By C. Rajagopalachari. (Oxford University Press. is.) THIS modest pamphlet has an importance out of all proportion to its length. Its author, Mr. C....

chocolates, and pro- posals with a lavishness that is unknown to the girls of today ; unknown as the spaciousness of life then, the brilliance, the glitter- ing jewels, the...

SOLUTION TO CROSSWORD No. 261 SOLUTION ON APRIL 7th

THE SPECTATOR " CROSSWORD No. 263 COMPANY MEETING

By CUSTOS FOR the activity or quietude of markets Stock Exchange men are seldom at a loss for an explanation. Rising prices bring out the now familiar arguments of weight of...

a new book. When it first appeared, in 1933, its merits were strongly emphasisedt in these columns. Merely to reprint it in 1944 would have been worth while, for most of the...

The Art of Growing Old. By John Cowper Powys. (Cape.

los. 6d.) Tins book brings to mind Dr. Johnson's claim that he was as good a judge of mutton as any sheep, with the converse it implies; does it help any, one wonders, in...