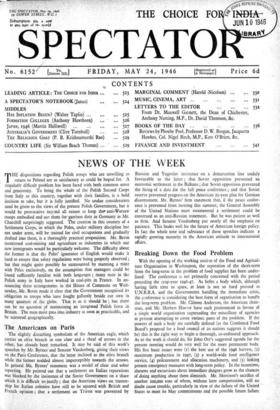 Breaking Down the Food Problem

With the opening of the working session of the Food and Agricul- ture Organisation in Washington, the separation of the short-term from the long-term in the problem of food...

T HE dispositions regarding Polish troops who are unwilling to return to Poland are as satisfactory as could be hoped for. A singularly difficult problem has been faced with...

The Americans on Paris

The slightly disturbing symbolism of the American eagle, which carries an olive branch in one claw and a sheaf of arrows in the other, has already been remarked. It may be said...

The National Insurance Bill, now at the Report stage in the Commons, continues on its royal road gathering garlands on almost all sides. It could hardly be otherwise with a...

The Government is wisely avoiding any precipitate action on the recommendations of the Palestine Committee of Enquiry, nor, to speak frankly, is any enthusiasm being shown about...

The Cable and Wireless Bill is even less informative than most nationalisation Bills, since it is exclusively concerned with the transfer to the Government of the shares of...

For better or for worse the Coal Industry Nationalisation Bill has had its third reading. There is no reason to modify the opinion expressed in these columns six months ago that...

The Open Door to the Universities

The "new scheme of awards for university students" announced by the Ministry of Education on Monday. will be generally welcome. Henceforth winners of State scholarships, open...

THE CHOICE FOR INDIA

T HE reluctance of both the principal Indian parties to pass an immediate verdict on the constitutional settlement outlined by the Cabinet Mission may be variously interpreted....

After nearly a year's delay, the name of the new

chairman of the British Council is, I understand, to be announced within a

From hundreds of editors, writers and officials everywhere the appearance

of a new issue of the International Who's Who (Allen and Unwin, 3os.) every spring must evoke a sigh of relief and satisfaction. For where else can the essential particulars...

The final cession of Sarawak to Great Britain is satisfactory

in itself, but the method of it is less happy. All that matters is the interest of the native population, which after a hundred years of mainly benevolent autocracy of the...

One interesting parallel between this year's negotiations on India and

those which led to the .adoption of the Montagu-Chelmsford reforms in 1919 is worth noting. The enquiry in India twenty- nine years ago was carried out by a Cambridge Secretary...

This year's report of the Friends of the Lake District

makes rather depressing reading. One would have imagined that there would be no one to disagree with the over-riding necessity of preserving un- touched the beauties and natural...

T HERE was no question about the opinion of the House of Com- mons about the proposed—indeed already decreed—destruction of German war memorials when the matter was raised in...

A slim little volume called simply The Cavendish Laboratory, and

published by the Cambridge University Press at half-a-crown, tells an astonishing story, such as I suppose no other university could equal or even approach, of scientific...

By WALTER TAPLIN L AST week price rises were announced for motor-cars and utility clothing and foreshadowed for railway fares and charges. In all three cases similar causes had...

By ANTHONY HAWTHORN .F ORMATION Colleges, one to each Army Command in this country and three overseas, have now been in existence for the better part of a year, and during that...

By MARTIN HALLIWELL W E are now in the ninth month of the occupation of Japan, and it is time to attempt answers to some of the more obvious questions: How long should the...

By CLIVE TURNBULL M R. JOSEPH BENEDICT CHIFLEY, Prime Minister of Australia, left the country to attend the Prime Ministers' Conference in London confident that, on his...

I AM tempted by a deep admiration for his character, energy and learning to recall a tribute paid to P. E. Matheson by the New College Senior Common Room when he retired. It...

— And Cornish A number of these county societies seem to

be steadily increasing in membership, and will increase more. The Cornwall Bird Watching and Preservation Society has also just published its annual. its fifteenth, report. It...

Midland Birds— It is astonishing how some additional artificial addition,

or subtraction, to a scene may alter the ecology of a district, that is, influence the nature of its inhabitants. The instance in question is a reservoir built for commercial...

In My Garden Bonifacius, the last of the three Ice

Saints, was grimly true to reputa- tion. On his festal day, May 14th, fell a killing frost that blackened potatoes, made even the broad helms wilt and cut many a flowering...

By P. B. KRISHNAMURTIII RAO W HILE I was in active service in the Indian Army our Batallion proceeded to Malaya and halted at Kluang and there we were getting fresh mutton...

By HAROLD NICOLSON T HE lapse, one might almost say the collapse, of the Conference of the Foreign Ministers in Paris is a disquieting event. The Russians seem to be adopting...

Monteverdi's Vespers. LAST week was rich in musical experience. Apart from Mr. Sclumbers return to London, to which reference was made by " Janus " in the last issue the...

"Spellbound." At the London Pavilion and the Tivoli. "Wanted for Murder" and "Wanted—More Homes." At the Gaumont and the Marble Arch Pavilion. "Report on Greece." At the Odeon....

ALTHOUGH Sickert died but four years ago, he may be considered, not unfairly, to have belonged to a previous generation and another age. Historically, his place in English...

"PALESTINE PERIL" Sra,—You write, with reference to the McMahon-Husain correspondence of 1915, that "though Sir Henry McMahon claimed subsequently that his formula excluded...

Sut,—May I thank you for the bold and clear-sighted article

of Mr. Paul Winterton on Russia Unlimited? It puts into words fears which, as a bumble member of the public, I tried to set forth from the moment that Great Britain found...

"THE FATE OF THE 'SOUTHERN TYROL"

sm,—may I be allowed space in which to reply to the letters in your edition of May toth commenting on the section of my recent article dealing with the South Tyrol? If I may say...

sni,—It is hard to understand'Mr. Nutting's contention that Italy must not have what he calls "a soft peace," and that "the Italian people must take the rap for the crimes...

Sin,—The last paragraph of Mr. Paul Winterton's article on "Russia Unlimited" perfectly expresses the truth about this matter as, I fancy, most Englishmen see it ; unless...

Sue,—Is it just, wise or compatible with the provisions of the Atlantic Charter to award the whole of Transylvania to Rumania? Not even that part of this province which is...

Sum,—How much longer is public conscience going to tolerate the use of slave-labour in this country? We hear plenty today, and rightly, about the inhumanity and wanton disregard...

Siu,—As one connected with the Press, as editor or foreign correspondent, for over twenty years, I wish to associate myself with Professor A. C. Pigou's protest against...

SIR,—A similar situation to that brought about by the decision of the Government regarding Egypt arose when Sir Henry Campbell-Bannerman, leader of the Liberal Government in...

Sm,—It is strange to think that after all we fought

for in this war it is possible for a bit of country to be cut off like a piece of cheese and handed over to a dissatisfied customer. A black day in - Paris when the Foreign...

Snt,—I read with interest the able article on church parades by Rev. J. N. Duckworth in your issue of May 3rd, and I have heard of . his gallant work amongst P.o.W.s. If,...

Sia,—Professor Goodhart's letter, published in The Spectatoi'of May i7th, compares the length of the Nuremberg trial with the Tichborne case, which he claims to be " perhaps the...

"LIBERALS UNDAUNTED" Sta,. , --One of the greatest needs of this country

and of the world at the present time is a revival of the true Spirit of liberalism, in contrast with the materialistieand totalitarian tendencies of both Left and Right parties....

Si,—May I have another Shot at indicating some of the curious logic of Mr. Gollancz's arguments? In his recent pamphlet, Leaving Them to Their Fate, he exhorts, "Abandon utterly...

LIBERTY ON THE LEFT

Sit,—Mr. Brogan in his article The Fretich Surprise in your issue of May loth says: "The country to which the. French Left or the Left of other European countries ought to look...

Sia,—May I make one or two comments- on - -Mr. DaVey's letter in your issue of - -May 3rd? It is not „native hunting- of game for food or in defence of crops that lovers of the...

Henry Ford, a Biography. By William Adams Simonds. (Michael Joseph. 18s.) MR. FORD is almost eighty-three and he is still active, although n ) longer in direct control of the...

Shelley the Man Shelley: A Life Story. By Edmund Blunden. 'Collins. 12s. 6d.) MANY of Shelley's biographers have been about as well fitted for the task as Gladstone was to...

Miss-Fire. By Jasper Rootham. (Chatto and Windus. 12s. 6d.) COLONEL ROOTHAM was dropped by parachute in May, 1943, to act as a liaison officer with a detachment of...

The Milk Bar and the Cow

HAPPY is the people which needs no Arts Enquiry. Who in Bali would think of instituting one? Like seeking a medical diagnosis, it implies that something is wrong. The wrongness...

THE SUDAN AND EGYPT

By ABDULLA BEY KHALIL* T HE Sudanese have been greatly disappointed on hearing that the sovereignty of the Sudan has apparently been almost decided exclusively between the...

T HE installation piece by piece of the new French constitution leaves the parties about two months for reflection and manoeuvre before they need reach agreement on the...

(Hammond, Hammond & Co. 8s. 6d.) Ti - us new translation of Ibsen's poetic drama is illustrated by John Vickers' photographs of the Old Vic company's production of i944, which...

Bocncs have nowadays to be arranged much too long beforehand

By CUSTOS As I suspected, the fall in gilt-edged stocks set in motion by the terms of Mr. Dalton's latest borrowing operations has not been either very prolonged or very...

THE lectures now published were given last year for the Charles R. Walgreen Foundation, and are the sixteenth of that Foundation's "Studies of American Institutions." The...