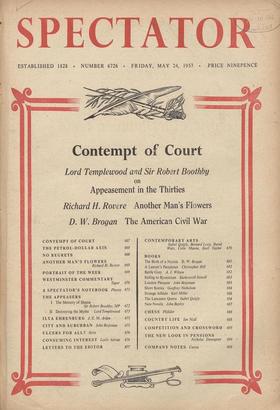 ?V HE Middle East, traditionally lavish of trans- formation scenes, has seen few more startling peripeteia than the visit of King Saud to Baghdad. The rivalry between the...

FVHE fall of the Mollet Government, due to the I adverse vote of a considerable section of the Right against the advice of their leaders, will hardly be Much regretted. In spite...

The Middle East seems for the moment to have reached a finely balanced stability which even the discussion of the problem of the Suez Canal in the Security Council has been...

THE game of quoting Henry V, which was begun by Lord Hinchingbrooke towards the end of the first day of the Suez debate, and reached truly im- Nevertheless, one or two things...

THE- CRUISER'S original name had been obliterated from her hull and a new name, Loup de Mer, sub- stituted on a wooden plaque. Daily Telegraph, May 15. THE NAME of Coup de...

THE CITY is en fete. Its Theatre Festival has brought great and enthusiastic crowds to streets which at night glitter with green and red and yellow fairy lamps. Sunday Times,...

IT MAY NOT have been obvious in recent months that

the men in charge of the Government's destinies have a sense of humour, but the choice of Government spokesman in the Salisbury-Suez debate shows that Lord Home, at least...

THE OVERWHELMING impression one got from a first meeting with

Professor Gilbert Murray was of his charming humility. It was difficult for the casual acquaintance to believe that this was one of the outstanding scholars of the age and its...

REPLYING TO A discussion in the House of Lords about

the appointment of Lord Hailes as Governor-General Designate of the West Indies, Lord Home stated unequivocally that 'what we need to do is to try to get the right man in the...

DO we REALLY all mind so much about the passing

of Picture Post? Sir Gerald Barry's letter to The Times last week was a valuable corrective to a mounting pile of nil nisi bonum sanctimonious- ness. Of course one isn't pleased...

WHEN MR. BEVAN was reported in The Times during the

Suez debate as quoting Henry V's prayer before Agincourt as follows : 'Steal my soldiers' hearts . . . take from them now the sense of reckoning,' those familiar with Shake-...

IT IS GOOD NEWS that the Prime Minister has acted on the suggestion of Mr. Desmond Donnelly that the burden of work on senior Ministers and possible ways of relieving it should...

`To THOSE of us who still, after forty years and

more, cherish the memories of the entertainments which Percy French used to give all over Ireland, your plea for respect for his works was heart warming.' Thus, the Director of...

I: The Memory of Shame BOOTHBY, MP By SIR ROBERT m s book * almost defies review. If you fall under the author's spell, as so many have done, including the present writer,...

By LORD TEMPLEWOOD musr follow the Parliamentary convention land, before I discuss this volume of memoirs, disclose my personal interest in it. Lord Halifax and I have been...

SINGING IN THE RAIN

I read in the West Briton that the charming Regency crescent called Walsingham Place in Truro is to be preserved through the action of a firm of young architects of a...

The City churches, twelve years after the end of the war, are slowly beginning to reappear. St. Mary Abchurch is open again, its painted dome by Thornhill miraculously restored,...

By JOHN BETJEM AN I ET me open with good news if you have not d already heard it. The Oxfordshire County Council, which stood out against the proposals of the Central...

By J. E. M. ARDEN I N the Stalin epoch when the great writers of Russia were being driven to exile or execution, like Babel and Pilnyak, or were committing suicide, like Essenin...

By STRIX WAS greatly struck by a full-page advertise- Iment which appeared in last week's Spectator, and doubtless also in other periodicals which, for better or for worse; I...

MAY 26, 1832 IN consequence of recent events, the proprietors of the Wellington Chatham coach, which runs from Graccchurch Street, have been compelled to change the name of the...

By LESLIE ADRIAN T is almost impossible to be stranded over- Inight in Brighton, Blackpool or Bournemouth. You can arrive unexpectedly at any of these ad j mirable resorts and...

MR. CHURCHILL AND THE PRESS COUNCIL

SIR,—Sir Linton Andrews in the course of a dis- cursive letter to the Spectator makes a number of points, only one of which I feel it necessary to challenge. Sir Linton states...

DOCTORS' PAY Sill.—I was interested to read the letter from

Angry Old Practitioner giving his view of the changing face of General Practice. I thought he gave a fair and moderate account of the picture as he sees it. How- ever,- another...

have condemned Jellicoe's tactics at Jutland : Churchill, Admiral Richmond and the captains of certain ships taking part. It would be equally possible to cite other authorities,...

THE CASEMENT DIARIES SIR,—In referring to yet another typescript copy

of the alleged Casement diary, Pharos has stated (May 3) that in his opinion it was written by an insane man and that it is 'barely credible that Case- ment could have been that...

SIR,—qt is permissible to argue that a parent has as

much right to buy a good education for his children as to buy them a television set, and that the aim is both worthy and in the public interest.' So Mr. Maude in your last...

EASTER MORNING SIR,—Surgeon is wrong in interpreting the expres- sion

'marvelled if' as implying that Pilate was filled with an almost incredulous astonishment. The Greek does not suggest this, and can quite well be trans- lated by the modern...

THE PARTITION OF IRELAND

SIR,—May I comment on two statements made or quoted by Miss Buckley? The first of these is that 'Catholic Nationalists have no power even locally' (my italics) and 'in...

SIR,—Mr. Angus Maude has skirted round the most valuable attribute

of the public schools—their free- dom and independence from the Slate system. Any legislation which brought a loss of independence could not possibly be supported by a Tory...

qCHOOLS TOMORROW SIR,—In your editorial 'Schools Tomorrow' you say that

it has now become obvious 'that the 11-plus. idea [my italics] was bad in principle and is rapidly be- coming unworkable in practice.' This statement seems to me to imply that...

SIR,—I was very interested in the series of articles on

education, partly because I attend a public school, but mainly because I feel that education is the basis of , society, and if we wish to change that society we must first...

At the Dublin Festival

ONE had heard, of course, of the degeneration of the Abbey; but here it was, substitute playhouse, crumb- ling walls, threadbare upholstery and all, and a depressing evening it...

SIR, —Is it not strange that no comment has been made on the pronouncement of the RC Bishop of Clifton the other day that they 'will not rest until every man, woman and child in...

Germany Then and Now It is unfashionable to remember Germany's politically criminal past today; a tinge of unsport- ingness is supposed to colour any reminders of it to a...

THE Italian Opera Season now run- ning at the Stoll is considerably better than those of the past few years, both in its repertory and in the standard of the performances. Lucia...

The Chairs, by Eugene Ionesco, and The Apollo de Bellac, by Jean Giraudoux. (Royal Court.) ONE realises perfectly well that it is no use trying to convert people to Ionesco—it...

How often it is said that the English are not really appreciative of sculp- ture, but one of the most obvious features of our artistic life in the last ten years has been not...

The Birth of a Nation By D. W. BROGAN T rr HE last New Yorker to reach me shows an 'exurbanite' waiting for the latest issue of the `Civil War Book Club,' dressed like a Union...

The Lion and the Throne: The Life and Times of Sir Edward Coke. By Catherine Drinker Bowen. (Hamish Hamilton, 42s.) SIR EDWARD COKE is one of the most fascinat- ingly...

THE British infantry soldier and his Canadian counterpart are the joint heroes of this book. It deals with the hard, bitter fighting required in October and November, 1944, to...

The Buildings of England. London, Vol. 1. The Cities of London and Westminster. By Nikolaus Pevsner. (Pelican, 15s.) THERE is plenty of information, indeed rather too much,...

Byzantium: Its Triumphs and Tragedy. By Rene Guerdan. Translated by D. B. L. Hartley. (Allen and Unwin, 25s.) THREE books on Byzantium, and each of them interesting in its...

WHATEVER Miss Nancy Mitford may urge in its favour, most people cannot possibly manage, however hard they try (and an inverted puritanism often makes us try to like all sorts of...

BARING-GOULD was an English eccentric and a confirmed amateur. To people like this the nation tends to accord an indulgent awe. And the sug- gestion that someone is a boring...

`I must apologise for an error 1 inadvertently made in my letter regarding the little heaps of soil in your Hampshire reader's paths,' says a correspondent , who continues, 'The...

By IAN NIALL AT times when I climb to the tops of mountains, as I not infrequently do in summer, it strikes me that a vast area of wasteland, that only by a stretch of imag-...

Horse fairs are much harder to find now than, say bull fairs, for to have a horse fair there must be enough horses to sell. It seems a pity that one of the old horse fairs,...

SPECTATOR COMPETITION No. 380 Set by Allan M. Laing Many

SPECTATOR COMPETITION No. 377 Report by Blossom • The usual prizes were offered for a set of verses (not exceeding a dozen' lines) suitable for publi- cation on May 24 (Empire...

By CUSTOS ONCE again the gilt-edged market has been disappointed by the Bank • • of England which refuses to lower the Bank rate from 5 per cent. to 4+ per cent., although the...

THE NEW LOOK IN PENSIONS

By NICHOLAS DAVENPORT MR. RICHARD CROSSMAN and his colleagues are to be congratulated on bringing domestic politics down to earth. So much of the debating at Westminster is...