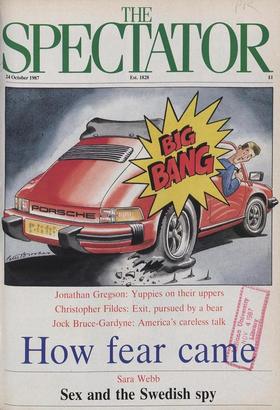 `Soon there won't be anything left to fiddle' A ferocious Atlantic storm blew unex- pectedly across southern England: hurricane-force winds caused the greatest damage to Britain...

TURNING ABORTION'S TIDE F eminists, certainly older feminists, are in favour of abortion. They therefore oppose Mr David Alton's Bill, which will be debated in the House of...

ENTRIES for the Shiva Naipaul Memorial Prize must reach The Spectator by 14 November. The winner will receive a cash prize of £1,000 for an entry of not more than 4,000 words...

Popular capitalism seems to be losing its popularity NOEL MALCOLM I t has been a terrible week. Bulls have stampeded, nest-eggs have been scram- bled, flotations have been...

0 n Sunday we arrived at the Con- naught for dinner with Si and Victoria Newhouse. After the astonishing South- East hurricane, the trees of London still la) chaotically...

Auberon Waugh is on holiday and will resume his column

YUPPIES ON THEIR UPPERS

Now that the bottom has fallen out of the market, there may well be a savage culling of City whizz-kids. Jonathan Gregson meets some of the first casualties IN THE wake of the...

HEIR TO THE AYATOLLAH

Patrick Bishop surveys the betting on the successor to the ailing Khomeini AYATOLLAH Khomeini is slowly slip- ping towards death, according to rumours filtering out of...

THE SPY WHO LOVED AND LEFT

Sara Webb reports on the disappearance of the enemy agent Sweden let go Stockholm HARDLY a day goes by in Sweden without the establishment of some investi- gating body or...

THE EMPIRE STRIKES BACK

Margaret's men: a profile of Sir Eric Sharp, who is ringing the world with his cables The second in a series of profiles of men whom the Prime Minister admires. WHEN Sir Eric...

Gavin Stamp calls for a belated memorial to a man who repelled invasion LAST week the scaffolding came down after the restoration of the Nelson Col- umn, the largest and most...

Charles Clover finds his emotions in conflict as he crawls towards the kill IT WAS 5.30 p.m. and the light was going fast when we saw a group of deer perhaps 600 yards away on...

THE week has been marked by serious rioting in London, usually the quietest of all capitals, accompanied by frequent and cruel assaults on the police. On Monday and Tuesday,...

A BIT OF A BLOW

John Sweeney meets the dossers and tower-block dwellers who weathered the storm DURING the London blitz, Malcolm Muggeridge and Graham Greene occa- sionally found themselves...

The press: Paul Johnson hails Murdoch the monopoly-buster WHICH is the public's best defence against monopoly? Is it government, pas- sing a law through Parliament and then...

It looks like a long wait for November 1988 JOCK BRUCE-GARDYNE C W e have had no end of a lesson,' sang Kipling at the end of the Boer War: 'it can do us no end of good.' The...

When the markets hit you over the head like this, pay attention CHRISTOPHER FILDES T extbooks on mule-handling pose the question: how do you attract the attention of a...

Dressy Labour Sir: Alexandra Artley's article on women politicians ('Who will handbag for Labour?', 3 October) is based on some misconceptions: 1) Well dressed women in the...

Sir: It was most gratifying to see in The Spectator (3 October) two articles con- veying a deeper understanding of Fiji's constitutional and ethnic problems than has been the...

SUBSCRIBE TODAY - Save 15% on the Cover Price! Please enter a subscription to The Spectator I enclose my cheque for f (Equivalent SUS & Eurocheques accepted) RATES 12...

Sir: Ambrose Evans-Pritchard's broadly accurate portrayal of urban poverty in the US Mown and out in Washington', 26 September) was spoiled by a misleading reference to the...

Sir: In his piece on welfare dependency (3 October) Dr Daniels paints a depressing picture all too familiar to dozens of his fellow doctors. In my grandfather's medic- al...

Sir: It is true that in the convict states kangaroo meat may be purchased as pet food. But in the enlightened south it is readily available from butchers for human consumption....

Sir: As an old professor I should be much more pleased with the beautiful Lady Mosley (Letters, 10 October) if she would only learn from history, instead of thinking that she is...

Sir: Alexandra Artley (Diary, 10 October) gave an account of the seminar on Ger- trude Himmelfarb's 'Victorian Values' pamphlet that must have mystified many who were present....

Sir: In your publication of 22 August last, you allowed a Mr Timothy Ash to use the term 'house painter' when referring to the late Adolf Hitler. A term such as that was at one...

Sir: If Auberon Waugh (Another voice, 5 October) firmly believes that Melanesians in Fiji are entitled to usurp political power for all time just because they are the indigenous...

How not to be a Minister Roy Jenkins OUT OF THE WILDERNESS, DIARIES 1963-7 by Tony Benn Hutchinson, £14.95 D iaries are a soft literary form. They are relatively easy to...

Stupidity is in the head of the beholder

Anita Brookner THREE CONTINENTS by Ruth Prawer Jhabvala John Murray, (11.95 T he effect of this strange story is one of unease and disbelief, but, alas, these reac- tions far...

The wobbling of a farouche blancmange

289 women of no importance

Isabel Colegate WOMEN by Naim Attallah Quartet, £15 M r Naim Attallah, the publisher, as everyone must know by now, gave 289 women lunch. He asked them how they felt about...

Madness in great ones

Generous to a great many faults

Max Egremont TRAIL OF HAVOC: IN THE STEPS OF LORD LUCAN by Patrick Marnham Viking, £10.95 LUCAN: NOT GUILTY by Sally Moore Sidgwick, £12.95 0 n the evening of 7 November...

Peter Levi UNDER HELICON by Penelope Tremayne Tabb House, £9.95 T his is a book about Mediterranean places; its author is courageous, high- spirited and wise, but the...

Czech theatre Memories are not acceptable Barbara Day describes the Czechs' struggle for artistic independence he stage is a bare traverse in a darkened gymnasium on the...

Rebirth of the blues JAZZ is back! Half the revolting ads on television show a lone male tenor-player drinking some yob lager or Blend 37 coffee. But it isn't jazz, it's the...

Figaro Macbeth (Opera North, Leeds) Symbol of hope Rodney Milnes I don't believe I have ever felt so vibrantly supportive an atmosphere at Co- vent Garden as that on the...

Serious viewing Wendy Cope W e switched on the television and saw a man eating a yellow flower. 'Oh, this is entertainment,' said my friend apologeti- cally. 'It will be over...

Send Fergie to Paris Taki o say I didn't detect a soupcon of panic among the rich clientele of the Paris Ritz last Monday would be like saying there is law and order in...

Mother knows best Alice Thomas Ellis A few weeks ago I dreamed that I was in a violently swaying house. I thought it might have been because there had just been an earthquake...

Jeffrey 'Bernard will be back next week.

Way beyond Orwell Jaspistos I N Competition No. 1494 you were invited to provide a description by a much later historian of the typical English pub of 2084. First, thank you...

Labours of the English vineyards

BITING the other day into a new season Worcester apple — crisp, delicately frag- rant with the scents of autumn, worth any number of those glossily tasteless deep- frozen Granny...

You are invited to provide an enthusiastic description by an eating-out columnist of a meal in an imaginary new restaurant, the words to have, on the discriminating read- er, an...