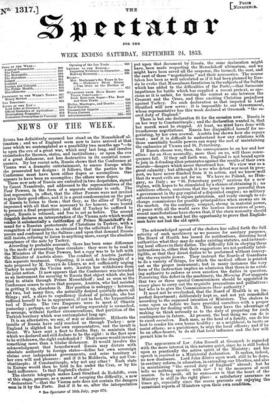 Rums has definitively resumed her stand on the Menschikoff ul- timatum and we of England seem 120W to have arrived at that issue whi ch we contemplated as a possibility two...

The appearance of Lor . John Russell at Greenock is

regarded with the more interest in this autumn quiet, since he is still looked upon as practically the active spirit of the Ministry; and his speech is received as a Ministerial...

The acknowledged spread of the cholera has called forth the

full activity of such machinery . as we possess for sanitary purposes. The Board of Health has issued its notifications, directing local authorities what they may do under...

At the meeting of the Court of Common Council, on Thursday, the most interesting part of the proceedings was the passing of a resolution to congratulate the Lord Mayor on his...

The Barnstaple election inquiry has been concluded. The Commis- sioners sat sixteen days, and examined more than four hundred witnesses. There are 262 freemen in the borough ;...

Tyre Queen has spent the week in her usual drives and excursions about Balmoral. On Sunday last her Majesty and Prince Albert dined at Aber- geldie with the Duchess of Kent....

An official letter has been received by the Lord-Lieutenant expressiag the "entire satisfaction which her Majesty derived from her late visit from the moment of her landing to...

Lord John Russell was complimented with a grand public reception at Greenock on Monday ; and in reply to an address presented to him by the Provost, Magistrates, and Council of...

FRANCE.—The Emperor, accompanied by the Empress, visited the camp at Satory on Tuesday, and put the troops through several manceuvres. Afterwards, the Emperor, having on his...

The following official notification of the presence of epidemic cholera in England appeared in the Gazette of Tuesday. "General Board of Health, Whitehall, September 20, 1853....

Sir James A. Gordon, the present Lieutenant-Governor of Greenwich Hospital, has been mentioned as the probable successor of the late Governor, Sir Charles Adam. A Court of...

The following notice, which has appeared in the daily papers

this week, contains a hint not to be overlooked by persons charged to the Income- tax. "It is very desirable that persons having claims for repayment of Income- tax on the...

Letters from Vienna, of September 10, state that a reduction

The Irish crops are reported to be "favourable," with the

excep- tion of the potato crop ; one fourth of which is now reckoned likely to be lost through disease.

The Lords of the Admiralty, visiting Queenstown to inspect the

fleet, arrived on Thursday, happily in time to take part in the ceremonial of laying the first stone of a new pier intended for the use of the Royal Navy. Sir James Graham made...

The clergy and churchwardens of the parish of St. Sepulchre,

London and Middlesex, have given notice to the parishioners, that, in consequence of an order from the Queen in Council, under the provisions of the recent act "to amend the...

Another letter from Mr. Norton appears in the morning papers.

It contradicts the story of the assault on Mrs. Norton "when enceinte," but admits that there was a drawingroom quarrel, in which he used vio- lence to push "Mrs. Norton's maid"...

STOCK EICHANON. FRIDAY AFTERNOON. The improved appearance which the English Funds presented at the close of last week has not been maintained : the reaction up to last evening...

he gaol inquiries at Birmingham and Leicester have revived attention

to a subject that has for some time dropped out of notice—the merits of "the Great Unpaid." They visit gaols; but the object of the visitation, the security of justice, is as...

The Asiatic cholera has appeared in Hull, and "four or

five" deaths are announced. In Rawmarsh, Yorkshire, one fatal case of cholera has appeared. No further case is reported from Manchester. The reports of the morning represent...

SATITILDAY. There is news of importance from Constantinople to the 14th. At the request of the Divan, and as a safeguard against the probable excesses of the fanatical portion...

The Emperor and Empress of the French left St. Cloud

on Thursday at noon, for their Northern tour. They arrived at Arras on Thursday evening; and were well received : the town was illuminated. On Friday morning they continued...

LORD JOHN AT GREENOCK. WHATEVER may be the reason, Lord John Russell never appears to so much advantage as when he places himself before the coun- try on Scottish ground....

Guzman the Brave, that old Spanish hero, whom some call a patriot and some consider a brute—that pattern of ancient loyalty, who when the besieging enemy threatened him that...

Mr. Farren's management of the Olympic Theatre, which has lasted

for about three years, came to its termination on Thursday night. Du- ring this management many classes of dramatic entertainment were tried, but its greatest SUCCESS was...

his adversary would only pay him in notes on an insolvent bank, he would soon retire from the table. However, this sort of instinctive wisdom, which would set a limit to the...

Pending the report of the Commissioners who have been ap- pointed by Government "to inquire into the practices of the Gaol,' we refrain from entering upon that subject. We will...

A rtiN for collecting agricultural statistics appears to have made more decided though quiet progress, under official consent, than the public has supposed. Many intelligent...

IN many respects the laws of Tuscany are very objectionable, but they are not more so than the laws of several other states, and foreign travellers are bound to obey the laws of...

OPENING OF THE INN TRADE.

IT is only in semibarbarous countries that antique forms of furniture or ceremony are maintained after what they typify has passed from them as an association, and that the...

IMPARTIAL EVIDENCE TO CHARACTER. "0 that some power the gift wad gie us. To see ourselves as others see us." Sin — As you have shown a strong attachment to representative...

Sin—Supposing that at some future time the Legislature should determine that it is impracticable to run fast trains on lines clogged with frequent slow trains, with any regard...

"George Nasmyth, C.E.," writes to the Morning Post to suggest,

" that along with the water used for watering our streets, there should be a few pounds of chloride of lime put into each cartful of water, and in addition to this a small...

MRS. MACKENZIE'S SIX YEARS IN INDIA.. Vellum journies between Calcutta, Bombay, and the Himalaya, form the topics of these three volumes of letters. The most interesting parts...

" I BELIEVE I have never had so many readers," says Mr. Dickens in the preface to Bleak House, "as in this book." We have no doubt that he has the pleasantest evidence of the...

VIN OVEN ON THE DECLINE OF LIFE. * "ENLARGE my life

with multitude of days," f is the prayer of many peoples at many altars, in spite of the warning of moralists and p oets; e ets • nor is it by any means certain that those who...

IRISH BEET-ROOT SUGAR. Among the reports presented to Parliament by command of her Majesty, last session, one of the most interesting was Sir Robert Kane's "Inquiry into the...

ADMIRALTY, Sept. 17.-The following promotions have this day taken place conse- quent on the dec. of Admiral of the White Sir C. Adam, R.C.B. Governor of Green- wich...