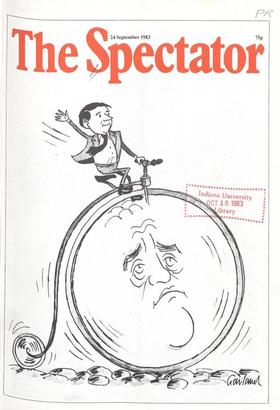 I t was Bismarck who declared that the whole of the Balkans were not worth 'the bones of one Pomeranian grenadier.' Now Enoch Powell has reached a similar concu- sion about the...

A bearded occasion Charles Moore CV - ou can say what you like about 1. bearded people . . .', one bearded Liberal delegate began. Can we? Well then, here is this column's...

I n 1 969, after much scholarly research, pope Paul VI decided to remove 46 saints from the Roman Catholic calender. This was because it was doubtful if they had ever existed....

A beast in view Auberon Waugh A small gathering in Doughty Street recently celebrated the publication of a book from John Murray at the slightly discouraging price of £15: The...

Sam White Paris I am not sure whether it was Machiavelli or Francois Mitterrand who coined the ad age that in politics one chooses one' s i enemies but not one's allies....

Anthony Mockler Hildesheim, West Germany 'I suppose the Spectator will give your article its usual left-wing slant,' said, with jovial suspicion, the colonel in charge of press...

Sheila Lawlor e conomic circumstances, Irishmen have be en apt to reply that, though no F or the past few years when cross- examined about their country's alarm- in s govern-...

Harry Eyres O ne day in the autumn of 1971, Baron Elie de Rothschild was reading Time magazine and happened to see a photo- graph of a bottle of Château Lafite, his property...

Steve Bruce T he drunk opposite me in the saloon car Nob o dy was insistent: 'Falwell's an ass-hole. cares what that guy thinks. He ain't a majority of nothing... and he pro-...

Roy Kerridge (In a grey, oppressive summer day, with V thunder in the air, the steps of the Bingley Exhibition Hall, Birmingham, were bright with hats, frocks and shawls....

Mr Gladstone, having visited the Orkneys, steamed across to Copen- hagen, where he was received, on the 17th inst., with every honour by the family party there assembled,...

Richard West Saxmundham, Suffolk T he new chairman of the Conservative Party, John Selwyn Gummer, is not widely revered by Conservatives in his own Suffolk constituency....

Flogging off BP Jock Bruce-Gardyne nless the ayatollahs have had a sudden V rush of blood to the head by the time this issue of the Spectator appears on the bookstalls, it...

Colin Welch nowst thou the land where the lemon 1.X.trees bloom?' My honest answer still, no. For various reasons, fear perhaps up- permost, I have usually given Italy a wide...

Sir: Your drama critic Giles Gordon (27 August) suggests the anonymous author of the Elizabethan drama Arden of Faversham (being presented by the RSC at the Pit until October)...

Sir: It ill behoves Tom Thatcher, whom I take to be a Salisbury Plain grain farmer, to address arrogantly the general public on the advantages (to the farmer) of stubble...

Sir: I was dismayed to switch on my telly black

and white, of course — the other day to see two Al crashers holding forth. One was an Irish pyschiatrist and the other your television critic. After ten minutes or so 1 gave up...

Sir: I don't mind being told I am wrong but

1 become edgy when I am misquoted. The appropriately named Mr Thatcher says that 1 complained about straw-burning. I didn't. I said the landscape looked as though the Vikings...

Sir: Whether the editor of the Literary Review is an anti-Semite, and certainly whether its proprietor is a gentleman (Notebook, 17 September), is of limited relevance to the...

Savimbi's negritude Sir: Fred Bridgland (`Russia's Vietnam', 17 S eptember) is right to ask for a new assess- ment of Angola, but I wonder if he is the best person to give it?...

Fitzroy Maclean The Highland Clans Sir lain Moncreiffe of that Ilk (Hutchinson £12.95) H ighlanders are notorious for a pride of race, which, while barely comprehen- sible to...

Peter Levi The Wolf Max Davidson (Quartet £7.95) This first novel is a stunning success. One 1 is not sure at first whether one li ke A s ti any of the people. 'Paul lay in...

Next week Autumn Books Reviews include

John Jolliffe Secrets of the Coast Su Ingle, foreword by HRH The Prince of Wales ( Weidenfeld & Nicolson £8.95) The Naturalist's Guide to the British Coastline Ron Freethy...

Trends at the Tate John McEwen New Art (Tate Gallery till 23 October) N ew Art really is a bad exhibition. Most of the painting and sculpture on view is an insult to artistic...

Lasting Richard Ingrams consic onsiderin g the hu g e amount of time dering money expended on it, it is surpris- in g how miserably bad most television drama is. I think that...

Let fly Tak i I haven't had an altercation in an aeroplane on my way back and forth from Greece in months, therefore it was in- evitable that it would happen sooner rather...

Busybodies Jeffrey Bernard I read in the Times last week of a ghastly new group of busybodies who call themselves Action on Alcohol Abuse. They want to make the price of drink...

September song P. J. Kavanagh N ear the beginning of this month I was sitting in the gardens of Walmer Cas- tle, near Deal, with my two sons. We have been doing such things...

No. 1288: Chesterfield reversed Set by Jaspistos: In some historical periods and in some areas of behaviour the younger generation are more strait-laced than their elders. A...

Top Flohr Raymond Keene N ews has come through of the death Of Grandmaster Salo Flohr in his 7 5 t h , year. During the 1930s, as a citizen ' 3 ' Czechoslovakia, Flohr's...

Jaspistos reports: Competitors were asked for a limerick describing a feat worthy of inclusion in a Guinness Book of Records. My inspiration was a charming limerick quoted by...

Apri • ze of ten pounds will be awarded for the first correct solution Opened on 10 October. Entries to: Crossword 626, The Spectator, 56 Doughty Street, London WCIN 211. LkIl...

U S ships stationed off the Lebanese coastline shelled the Chouf mountains behind Beirut which were occupied by Druze and Palestinian opponents of the country's Christian...