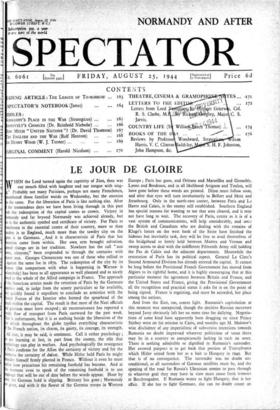 tv W HEN the Lord turned again the captivity of Zion, then was our mouth filled with laughter and our tongue with sing- ." Probably not many Parisians, perhaps not many...

Mr. Gandhi can hardly have expected that the substance of Lord Wavell's reply to his letter would have been other than it was, since his proposals included extreme demands...

The Bulgarian Government, like the Finnish, has been slow to point of obtuseness in not realising that Germany was losing war, and it was only a little time ago that it was...

Two events of this last week should go far to break down the forces of disunity in those Balkan States which have been linked to the Allied causeâGreece and Yugoslavia. One is...

In a public speech in Rome Count Sforza, who holds the office Minister without Portfolio in the Italian Government, put forw a plea for the return of her former colonies to...

THE LEAGUE OF TOMORROW

rni General Montgomery declaring that the end of the war is in sight (his vision, it will be observed, is a little more tracing than General Eisenhower's), Sir Alexander Cadogan...

The 8 o'clock news (and for all I know the

7 o'clock news) one morning this week happened to contain several different sets of figures which throw an instructive light on the relation between killed and prisoners in...

Whether it is the Minister of Home Security or the

Lon Passenger Transport Board that is responsible for the decision to run the Tube trains under the river (except on one route) d alerts I do not know, but I hope very earnestly...

A SPECTATOR'S NOTEBOOK A VERY high British officer was alleged to

have said just before or after D-Day that the Germans would be out of France in a month. The prediction seemed too fantastic for its author to claim to be taken seriously. Yet...

The proposal to leave some of the blitzed churches in

London elsewhere in ruins as a reminder to future generations of what blitz was seems to have aroused little enthusiasm, and I am surprised. What need, after all, is there for...

Signature tunes are the fashion nowadays, and some of them

any rate are much more recognisable than a great many mut signatures that come my way. A day or two ago a business lea reached me with a name suffixed of which I could not so...

Having commented on the frequent misuse of the 0 "

shambles " I may admit that its application to some of the 5 C in Normandy in the past week cannot be cavilled at. On the hand, the junior Minister who referred a few days ago...

I wish that Mr. Dalton, who has done great service

in arranging for the supply of utility articles of one kind and another, would tui n his mind to the subject of watches. He has, I know, done a good deal about alarm clocks, but...

NORMANDY'S PLACE IN THE WAR

By STRATEGICUS NY attempt to survey the military situation generally is faced by the fact that most of what everyone wishes to know is veloped in the "fog of war." Even what is...

By REINHOLD NIEBUHR New York. T HIS is America's first war-time presidential election campaign since Lincoln's day. While the necessity for such an election is viewed with some...

By DAVID THOMSON HE meeting of British, Russian and United States representatives at Dumbarton Oaks, the rapidity of Allied advance towards the an Reich from east and west, and...

THE ENGLISH AND THE WAR

By RALF HENTOM A FEW weeks ago I came to London from occupied Europe. To be among the English after four years under German rule is like coming to another world. Yesterday I...

By W. J. TURNER EW men could have had a more enviable life than Sir Henry Wood. To have a particular bent and talent, to discover it Y, to find your way while young and then to...

Or would it? After all, there are many thousands of

Germain today who have been brought up to regard Goethe as the type d perfect German and who have none the less accepted the Nan system almost without question. Is there no item...

By HAROLD NICOLSON I HAVE been reading during my spare moments Eckermann's Conversations of Goethe. It is a useful habit, in times of excitement, to have upon the table a book...

My hand strays along the bookcase and rests upon another

volume, also bound in black, Mein Kampf : von Adolf Hitler. I open it at random and find that I had marked the phrase: "While the ability of the politician consists in mastering...

When I was living in Berlin, in the years before

the great darkness of 1933, there were moments when I became troubled and confused by the uncertainty of the German character ; it seemed to me to possess no edges and no...

Two sets of German books upon the table before me,

their go characters suggesting something intricate and malignant. The Â° calm, generous and lapped by the radiance of some Attic morning the other tortured, malignant and...

Once Upon a Time." At the Gaurnont and Marble Arch Pavilion. â, Home in Indiana." At the Odeon. nce Upon a Time starts in the vein of gentle fantasy ("Pull a chair and...

I GIVE first place among recent issues to Arthur Rubinstein's recording of Beethoven's Sonata No. 26 in E Flat Op. 8ra, Les Adieux (H.M.V. DB6132-3). It is brilliantly and...

mine Hostess." At the Arts Theatre.âBallet Rambert. At the Lyric Theatre, Hammersmith. HERE is enough deft characterisation and truth to human nature keep Goldoni's comedy...

so, I regret it, but I think I used the word "unintentional," f o! was thinking less of what he said than of the effect of his insistence the guilt of Germany and the whole of...

August 18th is another appeal Is British intervention in order to end the deadlock between Indian politad parties. It differs from the usual one in that It does not come from an...

THE GERMAN PROBLEM Sm,âThe letters of Sir Herbert Grierson and Sir Geoffrey Bracken published in your issue of August 11th, within a short while of the war's end, are so...

Sts,âMay I suggest that the problem of German guilt and

punishment should be viewed from a more practical standpoint? All Germans have a certain amount of guilt, even the best of them thought nothing of joining in the wholesale...

the cur- rent issue of The Spectator prompts me to suggest that it will be a pity if we lose in peace what we have gained in war, namely the habit of giving and receiving help...

THE B.A. AND UNIVERSITIES SutsâIn your issue of August i

ith, " Numa Pompilius " devotes a para- graph to the Report, just published by the British Association, of a Com- mittee, of which Dr. Maxwell Garnett is the chairman, on...

sta,âI was very interested in the letter from Dr. H.

G. Lys, published in your issue for August 4th on " Cottagers' Light." The distribution of electricity in rural areas is a matter in which I am particularly interested. In this...

Sta,âThe supply of abundant and cheap electricity is a question

which interests not only cottagers but the whole community. If as your corre- spondent states one company has returned its capital to the shareholders to the extent of 220 per...

SntâIn reply to Mr. Lomas : The fact that a British Price Stabilizing Corporation was always prepared to buy a standard basic product at (say) a a ton and (so long as it held...

Happy Warriors Italy seems to be full of happy warriors.

The latest lettcr to read me contains a peculiarly interesting list of the butterflies observed in mid July. They included two types of swallow tail, `.! settling occasionallf...

MORE than once or twice I have read in comments on this island refer- ences to the extreme wetness of the climate; but foreign critics as well some natives seem to have acquired...

In My Garden Wasps, which are exceptionally numerous, are very

busy with ti* apples, even before they are ripe, and destruction of nests is a dutl. As we are told that we must not destroy them with derris powder, Â°thot efficient means are...

SCOTTISH ART AND LETTERS SIR,âMay we correct an implication that

seems to be conveyed in the first two sentences of your review of Scottish Art and Letters appearing in The Spectator of August 4th? A reader might suppose from this that...

Large Families There are more signs that the season is

likely to be one of the best ever for partridges. The stocks were large (owing partly to lack of cartridges and sportsmen), there were no July thunderstorms to bedraggle the...

Not often is the contrast between Southern and Northern Britain so sharply defined as this year ; and now that the armistice is over a fresh point in the contrast comes into...

StR,âYour contributor Mr. E. J. Davies, in your issue of August 4th, is surely overcautious in assessing the value of the returns on district heating as not particularly...

THE FORGOTTEN ALLY SIR,âIn a book recently published in America,

The Forgotten Ally, by Pierre van Paassen, which has had very large sales, the assertion is made that one-quarter of General Montgomery's 8th Army at the time of Ala- meinâthe...

OFFICIAL IDIOCY SIR,âIn this rural area a picturesque pond for

moor hens and wild duck is being filled in by " Army " authorities as a waste dump, to the material benefit of our villagers, who have salvaged, inter alia, ammunition, a case...

SIR IAN HAMILTON continues in this book the fascinating life-story he began in When I Was a Boy. The period covered is the 25 years spent in India between 1873 and 1898; but the...

The Field of Folk English Social History : A Survey of Six Centuries, Chaucer to Queen Victoria. By G. M. Trevelyan. (Longmans. 21s.) A BOOK by Dr. Trevelyan ix an event. No...

Britain and the World

AN anthology is usually one man's unwinnowed choice of the poems he likes best. Occasionally an additional confinement of subject produces a collection on gardens or birds. But...

Alexander Suvorov. By K. Osipov. (Hutchinson. 153.) GENERAL CALDWELL, in his introduction to an earlier life of Suvorov in English, that by Mr. W. Lyon Blease, wrote (the year...

UNLIKE Ethnea Aragon, who died young and by her pwn hand, Violet Hunt lived on into this age of war and devastation. She , wrote tenderly, if uncritically, of one whose...

guinea will be awarded to the sender of the first correct sehmon of this week's crossword to be opened after noon on Tuesday week, so:ember 5th. Envelopes should be received not...

Shorter Notice IT was a good idea to give the

English a better understanding of the Polish ethos, but Polish poetry, relying as much as it does on verbal music, is notoriously difficult to translate. Russian works such as...

By CUSTOS ONCE again investors are confronted with the apparent paradox of strikingly good war news and .unmistakably dull stock markets, From the peak level reached a...