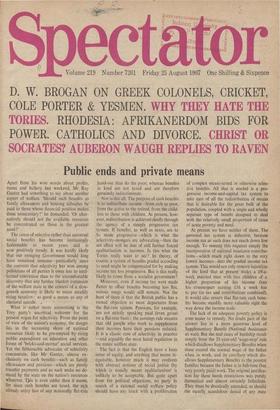 Public ends and private means Apart from his wise words

about profits, incest and lechery last weekend, ,Mr, Ray Gunter had something to say about another aspect of welfare. 'Should such benefits as family allowances and housing...

The immediate problem facing the Prime Minister and the Foreign Secretary on their return from holiday is the future of the British Mission in Peking. They must ob- viously be...

Bed Guards broke into the British Mission in Peking and burnt it to the ground on Monday, when the -Chinese ultimatum on Hong Kong ex- pired, and Mr Donald Hopson led his men...

Why they hate the Tories

POLITICAL COMMENTARY ANDREW ALEXANDER Andrew Alexander was Conservative candidate for CoMe Valley in 1963 (by-election) and 1964. This is the time of year when political jour-...

CHRISTOPHER HOLLIS There's a breathless hush in the Close tonight, .Nine to make and the match to draw. With wasting time in a fading light, We'll make it certain they get no...

RHODESIA FRANK CLEMENTS Frank Clements, a former mayor of Salisbury (1963-64), was suggested by Mr Wilson to Mr Smith as a suitable cabinet minister in the putative interim...

ISRAEL PHILIP GOODHART, MP There was very little that would have pleased Monty in the approach to General Dayan's office in Israel's Ministry of Defence at Tel Aviv. The...

AMERICA MURRAY KEMPTON Amagansett, L/—And so this summer all our pride has shrunk to the image of Mr Johnson searching his war maps for targets unbombed like some poor bankrupt...

For No read Yes

CATHOLICS AND DIVORCE R. L. McEWEN The Second Symphony of Divorce Law Reform is nearing the end of its first movement. -The theme of Breakdown, announced somewhat to the...

THE ENVIRONMENT PETER J. SMITH What has hardly received mention in the recent series of articles in the SPECTATOR on the dele- terious effects of economic progress is the role...

THE PRESS DONALD McLACHLAN There he was in white shirt and blue jeans, drinking a pint out of doors with young Winston and others, at the top of the front page of the Daily...

D. W. BROGAN I am delighted that the Greek government of colonels, or perhaps the King's nominee as Prime Minister, Monsieur Kollias, has quashed the absurd and odious...

MEDICINE JOHN ROWAN WILSON I heard recently that some large business or- ganisation had issued instructions to its execu- tives to take no important decisions for the first...

TELEVISION STUART HOOD I must begin by declaring my lick of interest. In ballet, to be precise, which has always seemed to me to come—the bulk of it—under the heading of...

A TEACHER'S DAY-4 DAVID ROGERS Mickey was late coming into class on Monday. 'He had to go an' see the 'ead,' explained McNeil. 'He was cheeky. 'E suddenly woke up in one of...

From the 'Spectator', 24 August, 1867—Great people seem to have at last hit upon a mode of entertaining each other which is a little picturesque. On the visit of the Emperor...

Christ or Socrates: a reply

PERSONAL COLUMN AUBERON WAUGH I was first introduced to Socrates at the age of thirteen by a learned monk who would flutter his eyelashes and roll his eyes while his face...

C. B. COX In 1922 T. S. Eliot brought out the first issue of The Criterion, under the financial sponsor- ship of Lady Rothermere. Contemporary readers were shocked by The Waste...

RAYNER HEPPENSTALL The Hunt Maurice Sachs translated by Richard Howard (Calder and Boyars/Sidgwick and Jackson 30s) Since Witches' Sabbath appeared here two years ago, we have...

RONALD HINGLEY For some fifty years Russian historians wishing to produce a serious general history of their country on native soil have been thwarted by the existence of...

Top of the fops ARTS

HILARY SPURLING Surprising evidence last week of the virtues of neglect: where Vanbrugh at the Aldwych seems as spry and cutting as he must have been when hounded off the...

ART BRYAN ROBERTSON An extraordinary sculpture by Phillip King is on exhibition for another week or so at the Rowan Gallery. The work exemplifies recent, and highly...

MUSIC CHARLES REID Liszt's Faust Symphony at the Proms was lis- tened to as it deserved, namely, with that special quality of silence which, going beyond mere absence of coughs...

On the rocks PENELOPE HOUSTON Divorce American Style (Astoria, 'A') The Bobo (Warner, `A') August lull for the movies, with great block- busting reissues (Exodus, The Alamo)...

NICHOLAS DAVENPORT After hearing from the National Institute that the British economy could slide this winter into its 'first major postwar recession' it was quite a relief to...

JOHN BULL Clearing banks and unit trusts have finally converged. The Martins bid for Unicorn marks the spot. For both parties the union is of immense importance—even though, in...

Sir: Simon Raven has made a very plausible case (18 August) for the present day's intellectual pre- ference for the wisdom of Socrates to that of Jesus Christ, despite the many...

CUSTOS Leslie Adrian is on holiday This is flaming August and on fine days the Stock Exchange is as browned off as the rest of the country. The leading firms are all say- ing...

Sir: I have been reading in the Frankfurter Allge- meine

Zeitung of 12 August that you recently published (II August) on the front page of your newspaper an article reading 'Die verantwortungs- losen Deutschen,' which could be...

Sir: In the Frankfurter Allgemeine Zeitung of 12 August 1

read a brief summary of an editorial of your distinguished paper obviously dealing with the causes which led to the recession in the German economy. Although I had no occasion...

Sir: Your correspondent Hr A. Menshausen of Frankfurt suggests that

England is incapable of altruism to other nations, particularly to his own. May I remind him that from June 1945 to the end of 1946 or later, the civilian rations in Britain...

Sir: After Mr Folkes's courteous reply (11 August) Jo my satirical squib sparked off by his letter of 28 July it seems ungracious not to answer in an emol- lient tone. But my...

Sir: In spite of some mildly offensive features, I found

Simon Raven's article more reassuring than wounding, and I feel some 'progressive' clerics might read it with profit. There are those who preach Christ and worship Socrates;...

Sir: I hope that others more technically qualified than I

will expose Mr Mottram's excursions in social psychology and in particular his statement that an aversion to skin colour is natural. Where so much in his letter is misleading it...

Sir : Mr Mottram reveals a remarkable ignorance both of

social conditions in this country, and the Government's intentions with_ regard to anti- discriminatory legislation. In the first place the extent of discrimination against...

fellow goes out and gets himself killed in public and between thieves; he so far forgets himself, don't you know, at one moment as not to keep a stiff upper lip. Besides, hang...

Sir: The threat to our landscape is that each technology

uses all forms of political pressure to achieve its ends by the cheapest possible means, without regard to other technologies, to wider economics, or to the time scale. Thus to...

JOHN WELLS Leafing indolently through someone else's copy of the Second World War in Pictures on Sun- day morning, I found myself fascinated by a photograph of German armour...

Sir: Even more than Mr Anthony Burgess (11 August), I am surprised at Scott being rated as a minor poet on the strength of a few scraps of verse from his chapter headings. What...

Solution next week Solution to Crossword no. 1287. Across. 1