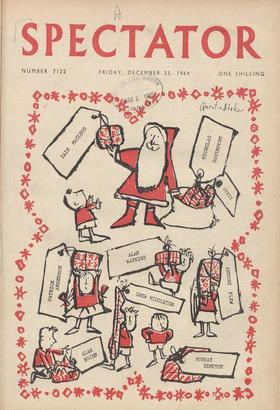 THE INDEPENDENT nuclear deterrent's week—pos- sibly its. last. In the 'most bitter Commons scene since Suez,' the Prime Minister blurted out under Tory taunts that the UK was...

S OME interesting results of the British character on the British townscape are brought out in Robin Best's Land for the New Towns (pub- lished by the Town and Country Planning...

M R. WILSON'S defence proposals have been much commended here for their newness. On the European continent they are suspect be- cause they seem riddled with British traditional-...

Looking for a Thaw

From OUR MOSCOW CORRESPONDENT HRUSHCHEV was a wunderkind. He knew all about art when he was eight.' The joke expresses the bitter anguish of the artists and the writers who...

ox./ can get £500 an acre for a crop of I Christmas trees (more, even, than for hops) if you know how to package them, and while the plastic variety have yet to establish them-...

From HARRY FRANKLIN LUSAKA ACROSS the Capricorn cut of Africa it is either CROSS hot in sunshine or soddenly warm in torrential rain. You cannot tell when it will be which. So...

From DREW MIDDLETON PARIS N the materialised Christmas of our times, it I fs increasingly difficult to catch the authentic note of these 'herald angels.' Sometimes one hears...

The Future of Sir Alec By ALAN WATKINS O NE of the most mysterious features of politics at this time of cheer and goodwill is the position of Sir Alec Douglas-Home. Is he...

The Role of Mr. Odinga

By KEITH KYLE V ICE-PRESIDENT Odinga Odinga is Kenya's pioneer African capitalist. Although some twenty years younger than the President, he represents the transition from...

Defence Talks From time to time the Prime Minister of

the day offers private talks on the nation's defence to the Opposition. Invariably the offer sounds statesmanlike and constructive, and it is sure of a warm welcome from the...

LIKE most people, I sup- pose, I have been buying some books for children in recent days. It is a pleasant if rather bewildering task: the choice seems to get wider every year....

Mr. Denis Healey, Secretary of State for Defence, quoted last week from the Spectator's leader of October 16. It was written before the result of the voting was known. The...

From MURRAY HEMPTON ' NEW YORK . . . such a dream as the Lincoln Center for the Performing Arts, designed to be the most fantastic monument of man's spirit since Athens . ....

Privacy It is excellent news that the Queen and Princess

Margaret through the Queen's Press Secretary have complained to the Press Council about repeated invasion by trespass 'which has con- tinued throughout the summer months.' The...

Pat-a-cake, pat-a-cake, banker's man, Bank me a crisis whenever you can. Nicholas Kaldor has sold us a pup. He said they should never put Bank rate up. He said at a crisis...

Lastly, my cold eye picks out a remarkable Christmas ukase issued by the Central Electricity Generating Board. Office parties, says the Board, must not get out of hand. Any...

This collection of questions, of a literary or .general kind, is offered as a Christmas entertain- ment. The answers are on page 881. 1. What is? (a) Logomachy. (b)...

By DIANA GRAVES C HRISTMAS 1937 in New York started with a matutinal bang which blew me clean out of my senses. `We must take refuge in the street immedi- ately!' I announced...

By IAIN MACLEOD T HERE was certainly snow on the ground and it was about Christmas time in Oslo in 1945 when I appeared for the last time as a defending officer in a court...

SIR,--I do not, I am afraid, regularly see the Spec- tator. My attention has, however, been drawn to the article of Nicholas Davenport in your issue of Octo- ber 23 in which...

SIR,-1 was interested to read Alan Brien's 'After- thought' in your issue of November 27, following upon the comments I had heard of the television programme in which he and his...

Sta,—When even Mr. Davenport has reservations about the actual operation of a tax which in prin- ciple he has always supported it is surely time to take a close look at the...

Sm,-1 was born of British parents and grew up in a British territory, and 1 am not a nationalist, but I am a South African. What we • cannot understand about Britain is that, if...

SIR,—The population of the Republic of India is increasing by more than 3 per cent per annum. In • other words, India is having every year 14,000,000 more mouths to feed, taking...

SIR,—It was unnecessary and unfair of Alfred Sherman to sneer at Pat Arrowsmith for offering to go to the Pacific to be blown u'p by the British H-bomb and then going to Ireland...

SIR,—Does Mr. FitzGibbon really mean to imply ('The Posthumous Life of Dylan Thomas,' November 27) that Thomas's poetry is not crammed with Biblical language and Biblical...

POLITICS AND THE COMMUNITY

SIR,-1 had expected that a letter as profound and important—and timely—as that of Dom Robert Petitpierre on' 'Politics and the Community' in your "November 6 number would have...

By CHARLES REID FINE things are taken off the shelf, thrust under our noses and whisked away before we have really had time to take them in. Such is the lot of the operagoer...

behind a desk, and looked morosely at some files. I

saw him soon after the big takeover. He had the air of a wartime fighter ace, grounded and put in charge of a training school. As the head of the Royal Ballet, Ashton is in...

The Desert Prince By PATRICK ANDERSON S CHOOLBOYS in the Twenties and early Thirties moved easily from P. C. Wren's Beau Geste to a real-life hero, Lawrence of Arabia. Deserts...

The Painter of Modern Life and other Essays. By Baudelaire. Translated and edited by Jonathan Mayne. (Phaidon Press, 34s.) Sainte-Beuve to Baudelaire. By Norman H. Barlow....

The Popular Arts. By Stuart Hall and Paddy Whannel. (Hutchinson Educational, 45s.) THIS is another book in the tradition of Richard Hoggart and Raymond Williams. It is long,...

The Tribal World of Vernier Elwin: An Auto- biography. By Verrier Elwin. (0.U.P., 30s.) VERRIER ELwIN was the last in a long line of Englishmen who attained fulfilment and...

What do you want for Christmas, John? 1 want some building blocks, A trike, a bike, a Christmas cake, A•fiVe-pound 'chocolate box. It did you ,get last yew.? I got A pencil...

THE noble and tragic struggle of the Korean people for freedom has been too long a neglected subject. It is therefore a pleasure to welcome any substantial contribution in this...

London on Sunday. By Betty James. (Batsford, 12s. 6d.) BEING a Londoner is made to seem a brave thing, as if there were a great deal of hardship to face in that state. The theme...

All Over the World

Translated by Kevin Crossley-Holland Storm at Sea Sometimes I plunge through the press of the waves Unexpectedly, delving to the earth, The ocean bed. The waters ferment,...

Silent is my dress when I step across the earth, Reside in my house, or ruffle the waters. Sometimes my adornments and this high windy air Lift me over the livings of men, The...

By LOTHBURY HE Australia and New Zealand Bank con- I eluded another prosperous and successful year ended September 30, 1964, when con• solidated net profits rose to £2.167...

CUSTOS is on holiday

Annus Horrendus By 'NICHOLAS DAVENPORT THE late Lord Dalton called 1947 'annus horren- dus' because everything went wrong for the then Labour Government. The investor will dub...

Merry Explosions By LESLIE ADRIAN Ostentatious or not, it needs resolute self- indulgence to pay 30s. to 50s. a bottle for a wine that provokes a frivolous response rather than...

Fearful Symmetry By STRIX I WAS casting rather desperately about for a Yuletide topic when the .tiger s glass eye caught mine, and I remembered that the poor brute had met its...

By ALAN BRIEN RoLE-REVERSAL is a well- established technique in psychotheraby. Once you have peered through the other fellow's eyes, tried on his soul for size, and attempted...