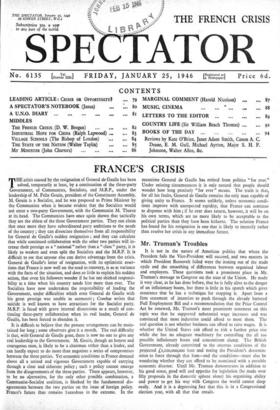 M. Gouin is a Socialist, and he was proposed as Prime Minister by the Communists when it became evident that the Socialists would not enter a two-party Government, with the...

It is not in the nature of American politics that where the President fails the Vice-President will succeed, and two matters in which President Roosevelt failed were the ironing...

Peace on the Roads

Driving standards clearly deteriorated during the liar from their none too high pre-war level, and now the whole situation is steadily worsening with the return of traffic to...

That a radical reconstitution of administration in Malaya is essential is common doctrine, and the plan which the Government, building on the intentions of its predecessor, has...

'The masochistic enthusiasm of the American people for learning the hard way . was never better demonstrated than in the present mounting wave of labour troubles. The whole...

Public attention is more often concentrate ,-1 the failures than the successes of our system of government, and perhaps this is ell to the good, for as Stendhal emphasised many...

There is one aspect of the Soviet Union's appeals to the United Nations which has _not received the attention it deserves. Great Britain has no reason to fear or deplore the...

L AST week saw the birth of the Security Council of the United Nations ; this week the new-born infant has been offered for nourishment, not the baby foods suitable to its age,...

Few distinctions have been better deserved than the barony con-

ferred on Sir Archibald Clark Kerr, who is at the moment on his way to Indonesia. One of the most experienced of all British career diplomatists, Sir Archibald did admirable...

This is an important week in the century and a-half

old history of Hansard. In the first place it is being printed for the first time by the rotary system instead of flat-bed—i.e., on whirling cylinders which permit of a much...

The appointment of a King Edward Professor of English Litera-

ture in succession to Sir Arthur Quiller-Couch does not come before it is due, for the Chair has been vacant for some eighteen months. To maintain the standard set by Verrall...

I T was rather a thin, but a keen and lively, House of Commons which reassembled on Tuesday after a Christmas recess of just over a month. There were the inevitable gaps. "How...

The supply of candidates for the vacant English Universities seat

is a little hanging fire. The only three officially in the field so far are Sir Ernest Simon, nominated from Manchester (and with very strong claims), Mr. H. Graham White from...

Lord Plender, perhaps in his later days the most eminent

accoun- tant living, died with one desire unfulfilled. He had an intense admiration for the late J. A. Spender, editor of the Westminster Gazette, and was eagerly looking for a...

There has been considerable curiosity as to who was responsible

for the brilliant idea of holding the Government's official dinner to the U.N.O. delegates in the Painted Hall at Greenwich. The function was an unqualified success and there is...

By D. W. BROGAN S I write this there is news of a new French crisis whose character and issue are still unknown. But whatever the ,issue, and whatever the immediate causes of...

By E. RALPH LAPWOOD C AN industrial co-operatives, which played such a valiant part in the economic defence against Japan, contribute to China's achievement of unity and...

By THE BISHOP OF LONDON T is high time that attention was drawn to the fate that threatens the village school. Local authorities are busy drawing up their plans for...

THE STATE OF THE NATION

By WALTER TAPLIN I N 194r Mr. Churchill, speaking of the Japanese, asked, "What kind of a people do they think we arc?" It is not quite im- possible that some sociologist in...

HE woke and missed the memorable dark. How small this day, whose too contracted skies Filled slowly from the cisterns of his eyes. A cloud he must have shed the new snow lay. He...

By JOHN CHARTERS H E was not a great man, and had no desire or pretence to be. He was not much interested either in politics or policy. His speeches were an inaudible string of...

By HAROLD NICOLSON H AVING embarked upon an ambitious study of the causes and nature of the English sense of humour, I had occasion this week to read and analyse The Pickwick...

" To-morrow is Forever." At the Odeon.—" This Love of Ours." At the New Gallery.—" Echoes of Applause." At the Wamcr. IT is in rather dubious taste, almost unfair, to criticise...

OPERA is of all the forms of dramatic art the most difficult and the most expensive, both in cash and talent. Mr. Clive Carey, the new director at Sadler's Wells, is therefore...

THE normal postal service:: to Czechoslovakia, Italy and Poland have

been resumed, and readers who would like to send copies of THE SPECTATOR to their friends in these countries Can DOW do so. The post paid subscription rate is 30s. per annum....

CZECHS AND GERMANS Si:11,—ft is somewhat surprising that there appears to have been no criticism in your columns of the extraordinary letter on Czechs and Germans from Mr....

Slit,—In the recent elections to the Central Assembly the Muslim League emerged with roo per cent, triumph in its first round with those who dared to challenge its authority. It...

Sitt,—I was glad to read Mr. J. A. Hutchinson's letter under the above title in your issue of January uth. 1 also advocate the right of the individual to call upon a civil...

JOB HUNTING SIR,—In connection with the subject of job-hunting as

it affects ex-Service men and women, there is one aspect of the labour situation in relation to the Services which I consider has received too little attention. That is, the...

Sta,—Alastair Buchan's outspoken article in The Spectator of January 4th cannot have failed to arouse great interest amongst those of your readers who believe that the...

"NUREMBERG JUSTICE" SIR,—Some of your readers will agree with me

in protesting against the tone of much of the article by Wilson Harris on Nuremberg justice. For he is an accredited Press correspondent and is, moreover, familiar with the...

Sut,—" Janus" comments on the appointment of a Committee of Inquiry to report to the Cabinet on the future of the great Nash terraces around Regent's Park. He rightly urges...

Snt,—I was amused to see, in Mr. Clinton-Baddeley's review of Miss Steen's novel, Rose Timson, that he has fallen into the pit that he dug for her ; for of the three solecisms...

Sia,—You will remember that we indicated in a recent letter

on the subject of "Job Hunting" that we had • answered advertisements in The Times from Servicemen seeking employment and that we had received, up to then, no reply. Since our...

snt,—.many will be grateful to Miss Rebecca West for explaining with what scrupulous care the men tried for treason under the Act of 1351 were selected. She has shown, that the...

Snz,—Of course Miss Reilly is right. I apologise to Bob Cratchitt, whom I was probably confusing with Sim Pappertit or someone. Possibly, then, the only ill-behaved Bob in...

Sut,—The announcement that a certain amount of food may now be bought by C.B.S.R.A. for relief work in Europe, and the appeal for funds brought relief to many who found it hard...

SIR,—The letter in a recent issue of The Spectator under

the heading "Job Hunting" evoked a sympathetic response from me. As a "six- year soldier "—the last three, in C.M.F., considerably enlivened by almost daily reports in Service...

THE MEANING OF CHOLLY

SIR,—Miss Rose Macaulay asks what " Cholly " was short for, if anything. The answer is "Charles," of course. I well remember when I was a small boy in the Eighteen Nineties a...

am much obliged to Miss Sparrow for pointing out the error in my former letter. I should have said " population " instead of "birthrate." It does not affect the argument. The...

"THE SPECTATOR" FOR BIRTHDAYS

FOR the intelligent person, young or old, there are few gifts more appropriate than a subscription to THE SPECTATOR. As a regular reader of the paper you will know what its...

I no not know that Government Departments can often show much journalistic skill or grace of style ; but certainly some claim to such qualities may be accorded to the Ministry...

Anna and the King of Siam. By Margaret Landon. (Harrap. 12s. 6d.) " . . . YOUR loving pupil Son Klin Harriet Beecher Stowe." In this ending to a letter from the Princess whose...

The vigil of a Nation. By Lin Yutang. (Heinemann. 12s. 6d.) A NEW book by Lin Yutang is an event of importance in the Far Eastern world, for he generally throws fresh lights on...

The Great Divorce. By C. S. Lewis. (Geoffrey Bles. 7s. 6d.) How easy and pleasant it would be to write a partial, a sugared account of this book! The temptation is strong for a...

IT is _seven years since the Spanish Civil War ended, not a long stretch of time compared with the sixty years that passed between the dates of the subject of War and Peace and...

SOLUTION TO CROSSWORD No. 357

8) t .USTO AFTER a disappointing start, this year's batch of statements from the bank chairmen has yielded some stimulating material. For out- spokenness the prize must go to...