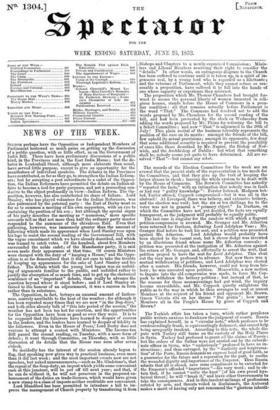 The Turkish affair has taken a turn, which rather perplexes

public writers anxious to foreknow the judgment of courts. Russia Las explained herself, in a "circular note," which professes to be condescendingly frank, is equivocatingly...

SELDOM perhaps have the Opposition or Independent Members of Parliament bestowed so much pains on getting up the discussion of a public question, with so little effect, as on...

The records of the Election Committees for the week are

an avowal that the present state of the representation is too much for the Committees, and that they give up the task of keeping the larger abuses in cheek ; leaving the whole...

Various minor &colons are raising several of the British Colonies

into notice. Father Gavazzi—a trained oratorical bravo of the Roman Catholic Church who has deserted to the enemy—appears in Quebec to issue from the pulpit of peace studied...

QUEEN Vicronia. and Prince Albert left Buckingham Palatie at half-past nine on Tuesday morning, for the Camp at Chobham. Her Majesty's party consisted of the King and Queen of...

The great military display at the camp at Chobham, on Tuesday, under the eyes of the Queen, proved a perfect success. So long as her Majesty remained on the ground, even the...

The adjourned meeting of the Special Court of the East India Com- pany was resumed on Monday. Mr. Hume opened the discussion on the Government bill by a repetition of his...

So long since as the 16th of April we put forth a warning that a serious danger hung over the National System of Education in Ireland. In- trigues having for their object the...

Two of the elections arising out of recent proceedings before

Commit- tces of the House of Commons have been decided. Mr. Bag,shaw, Li- beral, has been returned for Harwich ; and Captain "Vernon, Peelite ' has narrowly won the election for...

FRANCE.—Rumours, believed to be well founded, are current in Paris respecting a probable modification of the Cabinet. Already the Ministry of Police, in which it is said M. de...

Mr. Keogh, in his defence last week, cited a letter from Mr. Edmund O'Flaherty respecting a conversation between himself and Lord Naas during a journey to Ireland. The statement...

This week the Gallery of Illustration has been reopened with a new dio- rama by Messrs. Grieve and Telbin, illustrative of the route taken, or to be taken, by the Ocean Mail...

Sheriffs of the City of London for the ensuing year. Mr. Alder- man Wilson has accepted the Aldermansbip of the Ward of Bridge-With- out. There is some contest on the matter...

SATURDAY. Both Houses of Parliament were busied with old subjects last night,— the Commons with the debate, adjourned and again adjourned, on the Indian Government ; the Lords...

A telegraphic despatch from Constantinople, dated June 16, states that

"the ultimatum of Russia has been finally rejected by the Porte." Ano- ther despatch, dated "Jassy, June 8," mentions the presence of two Rus- sian agents in that city ; the...

Tho appointment to the vacant Head Mastership of Durham School

will be made by the Dean and Chapter on the 20th of July. The Council of the Royal Geographical Society has furnished some very valuable instruments to Dr. Sutherland, who is...

Mademoiselle Rachel's repertoire is this yearless oldfashioned, or—if people like

the word—less rococo than it used to be ; but 'ire are not sure that we like it a whit the more on that account. The great plays of Ra- cine, if they do nothing else, at any...

STOCK EXCHANGE. FRIDAY AFTERNOON. The English Funds at the early part of the week exhibited an unsatisfac- tory appearance and a declining market ; the uncertainties connected...

We take great pleasure in recording the production and success of a melodrama, called Genevieve, or the Reign of Terror. And we beg at the same time to say, that this pleasure...

Benedict's concert, on Wednesday morning, belonged to the " monster class

; but the fare was more recherche and delicate than is generally served up at these enormous banquets. His orchestra, in the first place, was select as well as numerous ; and...

At the cosmopolitan exhibition of pictures in Lichfield House in

1851, there was a picture to which a painful story attaches, and which we relate as it has come to us. The painting was one of considerable size, represent- ing John the Baptist...

Italian Opera. She appeared last Saturday in Maria di llohan, and had a favourable reception. Her physique is good ; she sang like an accom- plished artist, and acted with much...

RUSSIA'S NEW STARTING-POINT. RUSSIA occupies the Principalities, and proposes to negooiate,— makes an aggressive step in advance, and will then talk about it. It is an old...

SATIRE and grave reflection may equally find their field in Chob- ham—P tench and the future Macaulay may share the materials. The dramatic collection of a red-coated multitude...

IF we might believe any of the spokesmen for the parties contend- ing on the subject of India, we might suppose, alternately, that no one party knows anything whatever upon the...

THE ROMISH PLOT AGAINST IRISH EDUCATION.

IF we may believe the appearances reported to us from Ireland, a very serious political fault is in rapid progress towards eompletion, and the system of the National Schools,...

THE APPRAISEMENT OF WAGES.

FROM the manner in which several journals, which pay but an oc- casional or superficial attention to economical subjects, have spoken of the most recent proceedings in the...

As we say "honour amongst thieves," so we must begin to say "gentlemanly feeling amongst Members of Parliament." There is no community so low as to be without its point of...

CAMP AT THE CUM:UGH. Sin—You have more than once favoured me by inserting in your valuable paper some letters from me, and perhaps you will do me the honour of al- lowing the...

Sui—The recent exposure of bribery and corruption in the elections of Members of Parliament imperatively demands a thorough reform of the con- stitution of the House of...

COLONEL CHURCHILL'S MOUNT LEBANON. * A RESIDENCE of ten years in Mount Lebanon has enabled Colonel Churchill to accumulate a good deal of valuable information re- specting the...

MISS COSTELLO'S MEMOIRS OF MARY DUCHESS OF BURGUNDY. * THE life

of Mary Duchess of Burgundy, the young daughter of Charles le Temeraire, occupies but a very small space in this vo- lume, and when the heroine is introduced the events...

FRANCIS'S CHRONICLES OF LIFE-ASSURANCE. • THE scientific history of life-assurance, with

accounts of the rise and progress of remarkable offices, is not a new subject, though there is still room for an exact, comprehensive, and popular work. The frauds of...

Tun two previous fictions of this writer have been distinguished for strong but coarse pictures of rural life and character, very na- tural and true, but verging upon the...

Booxs. Theological Essays. By F. D. Maurice, M.A., Chaplain of Lincoln's Inn, &c. Life in Sweden ; with Excursions in Norway and Denmark. By Selina Bunbiu7. In two volumes. An...

On the 16th June, at Hillbampton House, Worcestershire, the Lady of N. Grif- fiths Buchanan, Esq., of Knockshinnock, of a son. On the 17th, in Cavendish Square, the Viscountess...