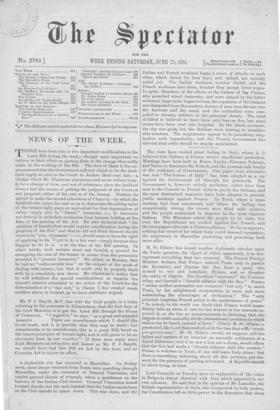 Lord Granville on Tuesday gave an explanation of the crisis

in Bulgaria almost identical with that which appeared in our own columns. He said that in the opinion of Mr. Lascelles, the British representative at Sofia, who is respected by...

M. St. Hilaire has issued another diplomatic circular upon the

Tunis question, the object of which, apparently, is to mis- represent everything that has occurred. The French Foreign Minister, declares that France entered Tunis only to...

A deplorable riot has occurred at Marseilles. On Friday week,

some troops returned from Tunis were marching through Marseilles, under the command of General Vincendon, and amidst general shouts of triumph, when a gentleman on the balcony...

T HERE have been one or two important modifications in the Land Bill during the week,—though more important, we 1)elieve, in their effect on parties, than in the change they...

The riots have excited great feeling in Italy, where it

is believed that Italians in France receive insufficient protection. Meetings have been held in Rome, Naples, Florence, Palermo, and Turin, to denounce the French, and the...

in a letter referring to the prisoners in Kilmainham, that the first duty of the Irish Members is to get the Land Bill through the House of Commons. " I regard it," he says, "as...

The accounts from Russia grow bewildering. It is said that

another party has sprung" .up, which differs both from the Nihilists and the Revolutionary Committee, and will make war on the autocracy by propagandism among the people, and...

Mr.. Pease moved, on Wednesday, the second reading, of the

Capital Punishment Abolition Bill, advancing the very worst argument of which we ever heard for his case,—namely, that very few of those condemned to death for murder belong to...

We do not at all like the Treasury Minute about

the Tele- graph Clerks. Their grievances are, it is true, redressed, they arc granted the same pay as the sorting clerks, their night- work is reduced by an hour, and their...

The Speaker has decided that a Member for Parliament is

justified in refusing to present a petition which appears to imply that the House of Commons has done that which is illegal; but he has not decided, as had been stated, that a...

The German elections are fixed for September, and it is

re- ported that the struggle will be unusually keen. The object of both parties will be to win the workmen, who, it is stated, in spite of the promises made them, will decide...

M. Jules Ferry has made a speech at Epinal, in

which lie has suggested an election cry that would have delighted Mr. Taper and Mr. Tadpole, had those gentlemen been French election- eerere ;—it is, " Ni rgvision, la division...

The Bishops dined at the Mansion House on Wednesday, when

the Archbishop of Canterbury, in responding to the toast of the Archbishops and. Bishops, made a speech of a somewhat apologetic character, in which he referred to many of the...

• The Irish are very angry with the Census returns.

Lord Cairns has been snubbed by the University of Dublin,

of which he is Chancellor, for proposing to it for honorary degrees, Lord Belmore, who had joined in the suggestion that the Divinity School should be separated from Trinity...

A very remarkable swindle has been exposed at Melbourne, by

the Government of Victoria. An audacious person, of the name of Walker, engaged a year or two ago the steamship Ferret,' .346 tons, belonging to the Highland Railway Corspany,...

The death, on Thursday week, of Dr. George Rolleston, Linacre

Professor of Physiology at Oxford, in his fifty- second year, was a shock to the University, and a great grief to a largo circle of warmly attached friends. Dr. Rolleston took a...

The Honorary D.O.L.'s admitted at the Oxford Commemora- tion on

Wednesday included General Menabrea, Mr. Goschen, Mr. Burne Jones, the .Bishop of Limerick, Dr. Westcott, and Sir It. R. Lingen. At Oxford, there is at present a healthy...

THE FRENCH COMMERCIAL TREATY. I T seems clear that the House of Commons were wise in adopting Mr. Monk's resolution that no treaty with France based on the reactionary general...

THE STEERING OF THE IRISH LAND BILL.

T HE notice which was given by Mr. Gladstone yesterday week that the Government, after considering the criti- cisms made on Clause 7 of the Irish Land Bill, thought it better to...

T HE Marseilles Riots are mainly important as revealing to the world, what politicians have long known, that there is one permanent difficulty in the way of a Franco-Italian...

AN ELECTIVE CURE OF SOULS.

W HAT ought not to be the method of appointing the Incumbents of ecclesiastical benefices has received a striking illustration in the recent election to the Chaplaincy of St....

T HE exultation of the English over their increasing num- bers, and the wails of the Irish over their decreasing population, seem to us equally exaggerated. The total number of...

T T is amusing to notice the excitement which Sir E. W. Watkin's speech as to the practicability of the Tunnel under the Channel has produced among Englishmen. Already many of...

S IR W. MTJIR, the author of the only solid. history of Mahommed as yet written by an Englishman, contem- plates, we are rejoiced to hear, the completion of his work by a...

THE CARLYLE MEMORIAL. [TO THE EDITOR Or THE " SPICOTATOR." . 1 Sin,—While I am glad to have drawn forth the expression of so much that is valuable as is contained in the letter...

(TO THE EDITOR OF THE "SPECTATOR.") Sm.,—When a man of feeling and insight, acting deliberately, is found to have disregarded considerations patent and obvious to all mankind,...

"FREE SALE" AND THE COMMON LAW.

[TO THE EDITOR OF THE "SPECTATOR."] S111, — Ia reading and hearing discussions on the Land Bill, it has struck me that few of the speakers realise the fact that by the law...

SPECIAL TRAINING FOR TEACHERS. go THE EDITOR DV THE SPEOTATOR.'l

SIR, — Your correspondent in last week's issue, writing on behalf of the excellent Training College in Skinner Street for Teachers for Girls' High Schools, says he knows of no...

"THE SMALL SQUIRES OF A. CENTURY SINCE." En THE EDITOR

OF THE "SPECTATOR.") SIR, — In the Spectator of this day's date, there is a very enter- taining paper on the above subject. The writer (well informed as he is) seems somewhat...

(TO THE EDITOR OF THE "SPECTATOR.") '8111,- 1 N - ill you kindly allow me to correct a misprint in the letter of mine on the work of the Teachers' Training College, which...

(To TUX EDITOR OF THE "SPECTATOR.") SIE,—In your notice of this volume of sermons last week, the reviewer " congratulates the audience who, after hearing them, requested the...

[CONCLUDING NOTICE.] IN this, our concluding notice of the Royal. Academy Exhibi- tion for 1881, we must begin with the mention of Mr. Luke Fildes' picture of "The Queen's...

• COLONEL GORDON IN CENTRAL AFRICA.* VALUABLE though this book is as throwing light on a most obscure chapter in contemporary history, deeply interesting though it is as the...

Da. Jurnrs RTIT,—if we may describe him in one of those somewhat vague and general fashions which are useful for those who know nothing of a man, and not without interest even...

Tins volume consists of four stories . in verse, suplass ' be told by an old Manx seaman, Tom Baynes, to his shipmates at sea, and which depict with singular vividness the life...