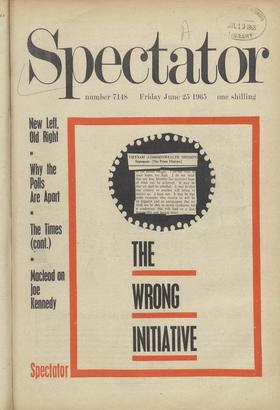 — Portrait of the Week — A TURBULENT TIME at the

Commonwealth Prime Ministers' Conference in London, with Mr. Wil- son's artful dove for Vietnam being shot at from many directions before it ever got into the air, and some...

P OLITICAL editorials in the Spectator have in recent months returned over and over again to two themes. First, that Mr. Harold Wilson, Prime Minister of Great Britain, governs...

`The Times' (contd.) CHRISTOPHER BOOKER writes: A deal of mystification must have been caused last Friday morning around the first - class railway carriages and rustic...

Transport Time Bomb ALAN WATKINS writes: It is unlikely that, in the small change of poli- tical talk, the Report of the Committee on Carriers' Licensing (the Geddes Report)...

Boumedienne's Army C OLONEI BOUMEDIENNE'S coup in Algeria seems to have had little other motive than the personal. His running quarrels with the deposed Ben Bella go back for...

Making a Million The Motor Industry Examined ROY HATTERSLEY, MP • David Knowles on Byzantium One year's subscription to the'Spectator': £3 I 5s. (including postage) in the...

The Other Side to the Bombings

From OSCAR VILLADOLID MANILA L I OR America's impatient allies in Asia, the American decision to bomb North Vietnam was only welcome. Having lived under the deepening shadow...

Thoor Ballylee MALCOLM RUTHERFORD writes : Yeats's Tower is now open to the public. For one who had come specially from London the ceremony was difficult to find. We drove to...

1 will arise and go now and go to Innisfree, And a strict survey make there of all their social facts, Showing that the percentage of teenagers is 79.3 That have committed...

By ALAN WATKINS S OME years have passed since writing on the condition of England ceased to be a major growth industry. No longer do the publishers produce a book a week on...

The Politics of Education

By MAURICE COWLING n OLITICAL parties may define themselves in r relation to their competitors ,at any point between two extremes: they may try to be as little like them as...

Why the Polls Are Apart

By HUMPHREY TAYLOR* E VERY time the polls disagree, their methods are exposed to a critical examination. The sampling techniques, the control and administra- tion of...

The Greasy Pole Reginald Bevins rather prided himself on being

in some ways different from most of his colleagues in the Macmillan administration. He came from a working-class home in Liverpool and felt that he knew more about 'ordinary...

Criticising Judges Many of the recommendations in the newly published

report on The Press and The Law seem to me excellent. This is not to say, I fear, that I consider them all likely to be speedily adopted. The report is the fruit of a joint...

W int many demands for the modernisation of parliamentary procedure and resources 1 sympathise. But I see no merit in the proposals to introduce electronic voting at...

Thought for the Week

I hope that wars and rumours of war in South-East Asia don't blind us to the fact that there is a splendid collection of Chinese art on display at the present time in the...

A plaintive appeal for the provision of more shillings this week received the predictable brush- off from the Treasury. I often wonder why we are so long-suffering—or...

By IAIN N IACLEOD I think the first two pages of the book tell us more about Joseph Kennedy than any other anec- dote or analysis could do. He was twenty-three years old and in...

Water in the Wilderness

By H. G. PROCTOR O UR need for water threatens the shores of the Lake District, the daffodils of Farndale and the unique flora of Upper Teesdale. To those who would preserve...

From DEV MURARKA MOSCOW rrt-IE Russians are dedicated ice-cream eaters, I unsurpassed by any other people. The plenti- ful availability of ice-cream is almost infectious. The...

Sixth-Form College with a Difference

Ity A, I) C. PETERSON T is often said that independent public schools 'should be centres of experiment. One at least, the Atlantic College, which the Queen visited this week,...

SIR,- I am glad that Lord Renwick in his article last week has told the dismal story of Britain's lost opportunities in space. Since the abandonment of Blue Streak as a military...

Life at the 'Queen

am afraid that Christopher Booker's swash- buckling account of life at 52 Fetter Lane (June 18) and particularly of Mr. Dennis Hackett's departure from the Queen was not...

Sla,----Mr. Alan Watkins has 'come across only one Labour MP who completely supports Mr. Wilson on Vietnam.' Mr. Watkins must talk to the wrong people. Included amongst the...

SIR,---His second letter serves only to confirm the suggestion that Mr. Rhodes James has little under- standing of the cardinal issues at stake in the crisis of 1915. He has...

SIR.—The obvious place for unwanted books is not, pace Mary Holland, the local hospital, but the local prison. A couple of years ago when I did a few days at Brixton, I took...

SIR, —Thanks to you and the editor of another august journal, this looks like being a splendid week- end for the famous old Italian sport of I Tori. The film correspondent of...

Sia,—It's all Very well for Mr. Hubert Little, of the National Society of Non-Smokers, to question how Britain can afford to pay £100 million a year to dollar areas to import...

Three Americans I N keeping with a supposed instinct for com- promise, the English art-lover has rarely been able to accept modern painting or sculpture which exists as an...

A Blast for Beckett `S EVENTEEN copies sold, of which eleven at trade price to free circulating libraries be- yond the seas. Getting known,' says Krapp. 'One pound, six and...

The Music of Time The Ladies of the Bois de Boulogne. (Academy Cinema Club.) W HAT might have looked like a salvage opera- tion has turned out to be a treasure hunt : the...

It Comes Out in the Wash Left-handed Liberty. (Mermaid.) 1 as an historical epic, Mr. John Arden's 1 L -1;anded Liberty is admirable. A bluff, irascible king bouncps about the...

By M. L. ROSENTHAL WISH there were some kind of chronological jmirror-reading one could devise to undo the effects of the way William Carlos Williams is being published in...

Magna Carta. By J. C. Holt. (C.U.P., 60s.) 'GIVEN under our hand in the meadow which is called Runnymede between Windsor and Staines on the fifteenth day of June in the...

The apple flowers Snow these fruiters with sun—with a white Weightless promise: The dumb wait of the crop. But among them I stand, reflecting. The carp-pond -- - -so old, King...

Thirty-Four Articles. By Wayland Young. (Weidenfeld and Nicolson, 25s.) SEX is a simple, splendid, natural and harmless pleasure, and if only we weren't so wilfully...

UTOPIA-FANCIERS will recollect Samuel Butler's topsy-turvy Er•ewhon, where lawbreakers were treated as sick, and the unhealthy were punished. Liberal-minded citizens could...

• 70s.) IN ancient China, when the country was divided into a number of different kingdoms, there was a class of peripatetic sages who went round from kingdom to kingdom...

Face of the Bard

The Days of Dylan Thomas: A Pictorial Biography. By Bill Read. Photographs by Rollie McKenna. (Weidenfeld and Nicolson, 30s.) THE text of the latest necrology of Dylan Thomas...

THESE letters 'from a soldier-priest' 1914-19 are all written to Father Teilhard's cousin Marguerite. In them. the future author of The Phenomenon of Man, the archaeologist and...

The Convention. By Libero Bigiaretti. Translated by Joseph Green. (Macmillan, 21s.) Portrait of an Artist with Twenty-Six Horses. By William Eastlake. (Michael Joseph, 21s.) The...

adopted into a family of incredible snobbery, commits the enormity of marrying a British girl with an unknown and possibly unsavoury background. From this be- ginning, murder is...

The Third Possibility. By Selwyn Jepson.

(W. H. Allen, I5s.) When a Cabinet Minister is approached by blackmailers, something must be done quickly—and discreetly. Something was —and it was the amateur investigators who...

A splendid tale of diamond smuggling between this country and Holland, with authentic details of the diamond and jewellery trade. HESTER MAKEIG

Death on the Champs Elysies. By Francis Didelot, Translated by

W. G. Corp. (Macdonald, 16s.) Commissaire Bignon is faced with a seem- ingly insoluble problem. The pattern of the crime was disturbingly blurred but the criminal had not...

Everyone Suspect. By Nedra Tyre. (Gollancz, 16s.) Martin Newcome, after

the death of his wife, found himself living in an empty world. Blamed for the murder of a girl, his life became a 'nightmare alternated with hallucination.' Per- sistent...

Agents and Patients [he Man in the Mirror. By Frederick Ayer. (Gollancz, 18s.) Here's a potential rival treading on Le Carrel's heels with an intelligent and riveting cold war...

Dealing with the Deficit By NICHOLAS DAVENPORT ' r is possible to doubt,' said the Bank of I England in its latest (June) bulletin, 'whether the public at large even now fully...

By CUSTOS W HEN the British government has to borrow short-term on a 61 per cent basis, which is enough to set both Montagu Norman and Keynes turning in their graves, it is not...

SOLUTION TO CROSSWORD No. 1175

By STRIX S OME - BODY wrote to a newspaper the other day asking if anybody knew the origin of the expression 'dog days.' I don't remember what the answer was, and if I did it...

Second-hand Rings By LESLIE ADRIAN I need not have worried. Every item, from the smallest 'wooden bygone,' has been authen- ticated by committees of experts, who meet every...