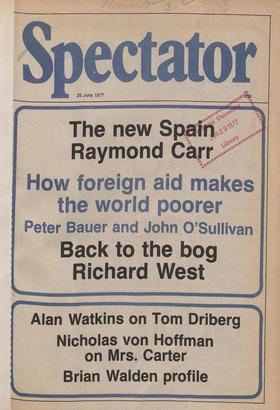 David Steel, through the fluky combination of a minority government wanting to stay in power and a collection of nationalists wanting a general election, finds himself in a most...

The coming cloudburst John Grigg Increasingly, now, the House of Commons has the air of a condemned playground. Alas, regardless of their doom, The little victims play! No...

If the Daily Mail defames a Government minister, the earth shakes and financial calamity threatens — there is already talk of six-figure damages for the Leyland story. If the...

Recessional Auberon Waugh Throughout the Commonwealth Conference in Marlborough House I was attending a slightly humbler Commonwealth gathering of doctors, nurses, patients...

Raymond Carr Madrid On Monday, 13 June, the last day of the campaign, the streets were littered with handbills, the confetti of some vast national Political fiesta. Every inch...

Back to the bog

Richard West Dublin The Irish general election was such good fun that it may sound churlish to voice certain worries about the result. The actual business of voting is much...

Queens of the western world

Nicholas von Hoffman Washington This week it's been mostly queens here, too. Nowhere is Her Britannic Majesty more secure in her subject's affections than In the United States...

Peter Bauer and John O'Sullivan In 1975, to mark Somalia's commitment to the ideals of International Women's Year, the President announced that in future women would enjoy...

The end of the Mess

George Richey Recently the authorities have begun to wake up to the the rather disconcerting fact that the family behaviour pattern in the Officer corps of the Army has...

A correspondent The recent, violent disturbances at the' Grunwick factory have been badly represented both by newspapers and TV. The origins of the dispute are not in doubt. In...

The brighter lights: a profile of Brian Walden

The House of Commons, like Punch, is not what it was. It never is. But when old hands, in press gallery and smoking room alike, can bring themselves to see the past straight...

BP and the new capitalism Nicholas Davenport , We are back again in what the City calls trading markets'. The bull market in equity shares is in suspension but this does not...

Sir: Granted the advantages of a market economy, it is surely too sweeping to say that British publishers 'haven't a shadow of a case' in the dispute about the 'traditional...

Sir: Geoffrey Smith's examination of the Tory Party in Scotland (28 May) was right in explaining that the vast proportion of council houses renders a huge section of the...

Sir: Having read Mr Waugh's article (28 May), I hope that you may be able to appreciate the kind of harm steady sniping, apparently at bureaucracy, but in fact at individuals,...

Sir: It is some time now since I have managed

to read one of Mr Waugh's articles to the end. His article in your issue of 21 May, just received here, however, struck me as reaching a low level even for him. There is a...

Sir:. Horace Freeland Judson (4 June) says that science is this century's art. But it is what science has discovered that is, or may be, artistic. Science is but the methodical...

Sir: Horace Freeland Judson in his article Has science won

the argument? makes all kinds of facile assumptions. If science 'is this century's art', what has it been in other centuries? There were plenty of 'beautiful eXperiments' being...

Sir: In his review of the film Car Wash ( 4 June) Clancy Sigal opines that it is 'a little late I would have thought for Stepin Fetchit to rise from the dead'. In case anyone...

Sir: Mr George Hutchinson in your issue of 11 June confines me (with Sir Oswald Mosley) to the 'pantheon', which my dictionary defines as 'a building where the nation's famous...

Sir: May I point out two factual errors in your

otherwise excellent editorial The bles sings of continuity (4 June)? You say that the Queen embodies 'the nation and national unity'. This is strictly untrue, if only for the...

Sir: Page 14 of the current number of the Spectator

(4 June) is very disgusting, with its vulgar and pointless cartoon and the opinions of secondto tenth-rate 'personalities'. Mr Kingsley Amis and Mr John Braine are excepted....

Sir: On 14 May last you published a letter from

me Nod save Ulster') in which I called Britain 'Weak, seedy, down-at-heel, shabby'. I should very much like to retract these words now, and to apologise to you and your readers...

Sir: Isn't it time that your employee chosen to write about television programmes stopped sniping indiscriminately at everyone?

He may feel able (11 June) to `predict with some confidence that everyone will be heartily glad when it is all over' (it being the Jubilee `yawnorama') but he is wrong. Many...

Sir: Miaow. A saucer of milk for Richard Ingrams. He

is obviously jealous over Huw Wheldon's deft and interesting covering of the vast treasures of our Royal Heritage. He is nasty, too, over objets d'art. 'If we have lost all the...

William Trevor The Gentle Barbarian: The Life and Work of Turgenev V. S. Pritchett (Ghetto and Windus £5.95) The reason why so many modern biographies are not worth reading...

Mary Kenny Living Like I Do Nell Dunn (Future 85p) Nell Dunn explains in the first chapter of her book ('An Exploration of Alternative Life Styles') why she was moved to write...

Kay Dick The Diary of Virginia Woolf: Volume I 191 5-1919 (Hogarth Press £8.50) If often maddening and irritating, as a subject for gossip, speculation and comment, Virginia...

Peter Ackroyd The Dead Father Donald Barthel me (Routledge and Kegan Paul £3.95) Literary 'traditions' in America, like everything else in that country, last about ten years....

Patrick Cosgrave When a major new thriller writer appears on the scene he invariably, as in any other field, spawns a series of imitators. Rarely, if ever, do they enjoy...

Isms Ted Whitehead Fair Slaughter (Royal Court) Divines Palabras (Lyttelton) Nobody votes for humanism, or makes war for it, or stops making war for it. But it's increasingly...

Three shapes John McEwen Phillip King's sculpture (Rowan till 30 June) has changed a lot over the years since his first exhibition in 1964, but seen in sequence each step has...

PR Rodney Miines Preconceived misgivings are among those things critics are not supposed to have, like a capacity to enjoy themselves. Renato Capecchi made his stage debut...

Crotchety Richard ingrarns Leading contender in the race for my Worst Play of 1977 award must be Waiting for Sheila by John Braine which Anglia TV saw fit to put out at the...

Not today Jeffrey Bernard The continuing saga of my wretched horse 'Deciduous is beginning to get on my nerves, get me down and get me in debt. She ran for the third time last...