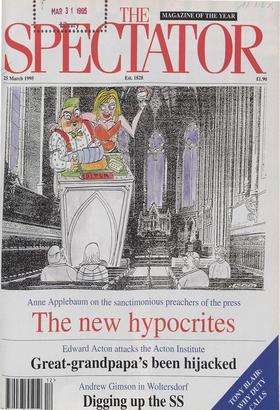 No more Mr Nice Guys! British fish fight back! M r John Major, the Prime Minister, spent 25 minutes on the telephone to Presi- dent Bill Clinton of the United States after a...

In which Mr Major's real reason for visiting Israel is explained. (It's got something to do with money) BORIS JOHNSON N o one reporting Mr Major's recent trip to Israel seemed...

JAMES NAUGHTIE old lion is losing his roar; another national institution is crumbling. Disgusted of Auchtermuchty is not what he was. Sir John Junor himself did me the honour...

On watching intelligent foreigners discuss a plan which will destroy my country's independence CHARLES MOORE O ne of the great difficulties about being in 'Europe' — perhaps...

WHY I SAID NO TO MARY ELLEN SYNON

Anne Applebaum is dismayed by the display of hypocrisy and cant which has ensured the resignation of the Deputy Governor of the Bank of England Last night, Mary Ellen, 44, a...

Andrew Gimson meets a German whose vocation is giving proper burial to the victims of the last great battle of the second world war Woltersdorf FOUR GERMAN helmets lay in a...

Rt Hon. Edward John Stanley, 18th Earl of DERBY, MC, of Knowsley Hall, Prescot, Merseyside, the racehorse- owner and member of the Jockey Club, patron of the Derby Awards made...

TAKING THE FAMILY NAME IN VAIN

Edward Acton, great-grandson of the historian, denounces the hijacking of the first Lord Acton by the American New Right FOLLOWING the trade of a famed ances- tor is a mixed...

I THINK I know what it feels like to be a saint. I do not refer, of course, to my conduct, which is only middling good, but to the number of intercessions with Higher Authority...

SABBATICALS SEEM to be all the rage these days. The disappearing comedian, Stephen Fry, said he needed one; the former Treasurer of the Con- servative Party, Lord McAlpine, said...

INVASION OF THE MORMONS

Ross Clark investigates a strange fact: the Utah-based Mormon Church is now one of the top ten landowners in Britain APART FROM the odd dust-storm and agricultural depression,...

WE REGRET to learn that Lord Rose- bery's recovery from influenza has been very seriously retarded by the return of the sleeplessness from which he former- ly suffered rather...

I've said my Last Words, so switch off the life-support, nurse PAUL JOHNSON O nce you get past 65, certain matters begin to demand attention. A Will? I have done that. Moral...

A Downing Street fix comes unstuck, and Rupert loses his job at the Bank CHRISTOPHER FILDES I opposed Rupert Pennant-Rea's appointment to the Bank of England. In this column...

Sir: Your correspondent Andrew Kenny (Becoming less of a nation', 25 February) is right; the Boers would never look to Nelson Mandela as a national leader as they looked to Paul...

appear to be claiming that `Pusey is generally claimed to be a precursor of modern Anglican "liberal Catholicism" ' . What I wrote was that this precursor was Bishop Charles...

LETTERS Not so rosy

Sir: William Waldegrave, whom I like and admire, has got it badly wrong in his article (There'll always be an England', 18 March) saying that the C of E is in good heart in...

Sir: Boris Johnson's column (Politics, 4 March) contains many inaccuracies which will no doubt be corrected in correspon- dence. As I was referred to by name, I would like to...

Sir: Charles Moore (Another voice, 11 March) refers to the recent Rowntree report on income and wealth as being based on the premise that 'inequality of wealth is unfair and...

Whingeing has become a habit of mind for British science SIMON JENKINS his has been national Science, Engi- neering and Technology Week. 'Genes are Us' says the station...

The game of the name Philip Hensher THE INFORMATION by Martin Amis HarperCollins, £15.99, pp. 496 T here are two novelists. Both are very bad. But one writes the sort of...

On the Dadar Express

The poem brings you to mind, as this place brings the poem: platform, nameboard, idling steam- engine, a landscape of sand somewhere in Tamil Nadu on the day I'm fifty three. I...

All in a lifetime

Not really agonising and ecstatic

David Anfam ELAINE AND BILL, PORTRAIT OF A MARRIAGE: THE LIVES OF WILLEM AND ELAINE DE KOONING by Lee Hall HarperCollins, £16.99, pp. 340 L ee Hall's account of the unsteady...

Rather ordinary horror and hatred

The countryside preserved by disgraceful occupation

Charles Saumarez Smith THE VILLAGE THAT DIED FOR ENGLAND: THE STRANGE STORY OF TYNEHAM by Patrick Wright Cape, £17.99, pp. 420 T he tale of Tyneham, the Dorset village which...

It's at this time I most think of her, Peaky, no longer young, as year after year She tried to go on as normal, walking quickly, stopping To comfort some parishioner,...

I've seen the future and it hacks

Two views of a double agent

In an article published in The Spectator (10 December 1994) Alasdair Palmer described the links between the KGB and Richard Gott, literary editor and former features editor of...

Dance Pressing the right buttons Jann Parry talks to Lisa whose career with the Royal Ballet began at the age of six S een 'em all, Lisa has — Tamara Karsavina, Sir Frederick...

A chair to covet Alistair McAlpine S eldom do I lon g to buy a lot that comes up in the sale-rooms, but there is a hi g h- back chair for sale at Sotheby's on 31 March that I...

The Madness of King George ( PG, selected cinemas ) Royal marbles Mark Steyn I like the new title. We've all heard the j okes about why the Samuel Goldwyn Company insisted on...

Monkey business Ian Hislop A fimal Detectives (ITV, Thursday 8.30 p.m.) is an ambiguous title. It sounds like a programme where pets go around investigating murders — a bit...

A question of class Jeffrey Bernard T he Americans, apart from being politi- cally naïve, are politically correct to an extent now that makes me almost want to vomit. San...

Not two too many Taki Gstaad T he Eagle Club as well as the Palace Hotel closed last Sunday, the latter staying open one extra day for the president of Cameroon to get up...

Lordly dreams Nigel Nicolson I had not entered the House of Lords for 30 years until I was invited to lunch twice within the last month by two different peers. There is...

I HAVE LEARNT, in ten years of restau- rant reviewing, that it doesn't pay to have expectations. Disappointment is an occupa- tional hazard. I had, though, to go hopeful- ly to...

New flair Andrew Robson THERE IS an annual competition amongst selected experts to produce the best tip for the above average bridge player. Possibly the most useful such tip...

Takeaway Raymond Keene THE INDIAN GRANDMASTER Viswa- nathan Anand finally broke through in game 9 to take the lead in his match in the PCA qualifying cycle against Gata...

ALIWOKHIMAY ISLE OF i 1 SNLLE kIALT S Ota :NISIII COMPETITION Kate and Pet Jaspistos IN COMPETITION NO. 1873 you were invited to supply a rhyming dialogue between Kate and...

A first prize of £25 and a bottle of Graham's Malvedos 1979 Vintage Port for the first correct solution opened on 10 April, with two runners-up prizes of £15 (or, for UK...

One heck of a night Frank Keating I WATCHED the England rugby team's musclebound plod of a victory over Scotland on television at the Aghadoe Heights hotel which is perched...

Dear Mary. . . Q. After a severe personal loss, I was recently invited to stay for two weeks in Barbados with the apparently sympathetic widow of a very old friend....