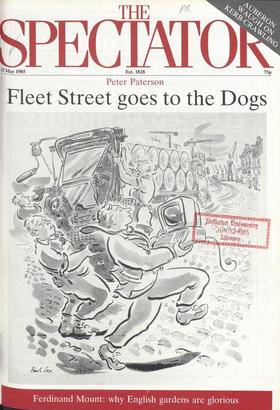 thought what the hell, it's one way of getting them in and making a profit.' T he IRA prospered in both its guises: Sinn Fein candidates were returned in 59 seats in local...

WHEN J. H. Newman preached his last sermon to his parish of St Mary the Virgin, Oxford, in September 1843, before leaving the Church of England for that of Rome, he spoke in a...

DEMONSTRATED BY MR KNAPP T ravelling to work on the London Underground last Monday morning was unusually agreeable. The trains appeared to be running normally but were for some...

THE news that the Secretary of State for the Environment has rejected MI Palum- bo's project for Mansion House Square comes as a profound relief. The sanity and objectivity of...

If Mrs Thatcher were backed by 400 Bernard Levins CHARLES MOORE M y apologies for staying with Mr Francis Pym â the poor man probably wants to be left alone for a bit â...

PEREGRINE WORSTHORNE W hen I write an article in the Sunday Telegraph criticising Mrs Thatcher â as I did last Sunday â readers send in letters to complain that I am doing...

FLEET STREET GOES TO THE DOGS

National newspapers face their greatest premises may not change the printers A LINE of urine ran like a tiny brook down the slope of the alley towards Fleet Street. A second...

ONLY THE POOR MEET THE POPE

Apathy, not apostasy, Brussels IN THE Netherlands, with its Protestant majority and dissident Catholics, Pope John Paul II faced profound, violent opposition to his papacy...

Andrew Brown on Sweden's atom bomb, never built but still explosive NOTHING spectacular ever really hap- pens in Sweden; if it seems to, this is misleading; yet it has still...

From the arrest of corrupt border guards, Richard Bassett infers a thaw Vienna CROSSING any frontier in Central Europe is a wearisome affair, but there are few more sinister...

Survivors: A profile of Michael Oakeshott, debonair Tory sceptic MICHAEL Oakeshott is famous but not at all well-known. A Cambridge don who met Mrs Thatcher shortly after she...

The press: Paul Johnson in New York and Bermuda THE American newspaper world is discus- sing with some apprehension Rupert Mur- doch's next move. When he bought the New York...

Christopher Fildes is on holiday.

Sir: Until your edition of 4 May, I had always tended to believe like Colin Welch that many custodial sentences do more harm than good. But what are we to make of Taki? Having a...

Sir: Ausonius was a Roman poet (fourth century) who gave his name to ChÃ¢teau Ausone, one of the great wines of France, premier des grands crus de St Emilion. He is thought to...

Sir: I refer to Mr Christopher Edwards's review (Theatre, 11 May) of Noel Co- ward's Cavalcade, in which he says: . . his working class speech is comically mis- conceived and...

SUBSCRIBE TODAY! I would like to take out a subscription to The Spectator. I enclose my cheque for Â£ (Equivalent $ US& Eurocheques accepted) RATES: 12 Months 6 Months...

How German guilt can start to be expiated COLIN WELCH T he German young, 1 suggested last week, seem estranged from German clas- sical literature, almost as if it were written...

I met him in a restaurant near the Madeleine and while we waited for his wife to come his fingers galloped on his chair. Twice during lunch he took out his pen to draw up maps...

Oh, I simply love the wounded

Peter Levi POETRY OF THE CAROLINGIAN RENAISSANCE by Peter Godman Duckworth, f29.50 T he case against Carolingian Latin poetry was put with perverse severity by Roger Hinks in...

Kneeling like some strange four-footed beast And cleaning my unfashionable shoes, By which I mean elastic-sided boots On an old newspaper's forgotten news, I dab the brush into...

Nature red in tooth and claw

Wilfred De'Ath IN DEFENCE OF ANIMALS edited by Peter Singer Basil Blackwell, f15, f4.95 The heat of the summer city was unbearable. The pigs were waiting, small eyes intent on...

Was the Dergue to blame for the famine?

Philip Marsden Smedley ETHIOPIA: THE CHALLENGE OF HUNGER by Graham Hancock Gollancz, Â£3.95 C overage of the Ethiopian famine to date has seldom strayed from the graphic...

Francis Bacon (Tate Gallery till 18 August) Reservations Giles Auty A last the opportunity has come to assess a lifetime's work by one thought by many to be the world's...

Talking to Francis Alistair Hicks V ery few people like poetry or painting; they really want a story. I don't like stories; I'm not a narrative painter. Painting is a language...

A rumour has been floating about that the Russian government has been put- ting forward new claims, and especially one for the neutralisation of Afghanis- tan, the only basis,...

Carmen (Glyndebourne) Without the princess Rodney Milnes B usch and Ebert planned to perform Carmen at Glyndebourne in 1940, but events not unconnected with their presence...

The Mysteries: 'Doomsday' (Lyceum) Spirit level Christopher Edwards R eaders of the Spectator will under- stand that the excellent writing on which it prides itself, and for...

Performers Noel Malcolm I n the Ideas Department of Broadcasting House they have spent the last 43 years staring in disbelief at the success of Desert Island Discs....

There is now a charge of Â£1 per insertion (max. 2 books). Cheques made pay- able to The Spectator. Please send details to Books Wanted, The Spectator, 56 Doughty Street, London...

Minorities Alexander Chancellor S omething has gone wrong with my video tape-recorder, or possibly with my ability to operate it, for I can find on it none of the programmes...

Spring fever Taki New York My, what a difference a season makes. Last winter, while languishing in north London, each day â as poor old Oscar put it â felt like a year, a...

Mixed up Jeffrey Bernard T he amazing woman I wrote about last week who told me that she wanted to drown in the twin blue pools of my eyes turns out to have a delightful flat...

Modern times Alice Thomas Ellis I went out again last Tuesday evening; something I do as seldom as possible because I like to get to bed around 9 o'clock, but this was a...

1985 P. J. Kavanagh I t is reported that the visiting Australian cricketers have been bemused to find that in this country the sun is not a source of heat. It was possible to...

No. 1373: Best woman Set by Jaspistos: The best man's speech at a wedding on behalf of the groom is tradi- tionally fruity and facetious and notorious- ly fraught with pitfalls....

Qualifiers Raymond Keene T he first of the three Interzonals is over, and Yusupov, Beliaysky and Portisch have qualified for the Candidates' tourna- ment. To decide the last...

No. 1370: The winners Charles Seaton reports: Since poets, though

they may rhapsodise over gardens, seldom give much in the way of practical advice, competitors were asked for helpful verses on any gardening subject. Not all poets, however,...

Imperative cooking: quantities and the ritualists

ONLY those who â¢cook appreciate how foul most bacon now is. At the slightest application of heat it half-heartedly spits then slowly emits a cloud of steam. This is to prevent...