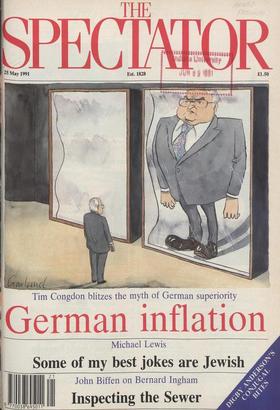 27124; Fax: 071-242 0603 THE ALTERNATIVE GOVERNMENT On the specific question of the National Health Service, Labour's tactics in Mon- mouth were dishonest; trust hospitals do...

Winning a battle in the war of words, while losing the campaign NOEL MALCOLM N ever underestimate the power of words in politics. Not the power of what the words mean, that...

A l this week has been like a phoney war. Or rather — since the expectation of a new baby is hardly that of an invading army — it has been like the half-hour before a party,...

Press freedom: how the latest threat can, with luck, be averted AUBERON WAUGH 0 nly the Ukrainians and Byelorussians who welcomed the invading German arm- ies in the summer of...

WIDE OF THE MARK

Tim Congdon discovers that Germany is much less powerful than everybody thinks THE British have grown to admire the Germans. From the ashes of 1945 West Germany's economic...

ONLY GENERALLY A COUNTRY

Matt Frei does his best to understand Yugoslavia Knin FOR SEVERAL weeks JAT, the Yugos- lav national airline, whose headquarters are in Belgrade, did not fly to the Croatian...

persist... THE Minister came to open the new extension to our ward last week. I arrived too late at the ceremony, thank good- ness, to hear the nauseatingly self-...

THE RISING PRICE OF JEWISH JOKES

Michael Lewis finds that there is one rule for the oppressors and another for the oppressed New York LET'S be honest: everyone knows Jews can't work with their hands. You can...

STRICTLY FOR THE BIRDS?

Sally Richardson on the unpleasant practices of a great charity THE ROYAL Society for the Protection of Birds is probably the largest wildlife conservation charity in Europe....

A READER received the following invitation: Lord Brocket has great pleasure in inviting you to the Launch of a Unique Concept for Corporate Golf at Brocket Hall on Thursday 28th...

Vicki Woods on the national obsession with a footballer's anterior cruciate ligament I CAN'T think what came over the Daily Mai 's newsdesk last Sunday teatime. Sun- day is a...

The design attributed to the Russian Government of deporting Jews to some new habitat has been more definitely described. It is proposed, under an agreement with the Khedive of...

THE STRAIN OF TRAINING

Arnab Banerji wonders whether the Government is right to leave training to the market `YOUR engineers are some of the best qualified in the world' said the Japanese...

TO SUE OR NOT TO SUE

if some Labour politicians have the courage to go to court LAST Friday many people listening to the BBC Today programme heard the Health Secretary, William Waldegrave, call...

The Mond test why ICI doesn't mix with its two noble raiders CHRISTOPHER FILDES I was brought up to take the Great Company seriously — the phrase being shorthand for Imperial...

THERE was a time when ICI had half a million shareholders. Now, with the de- cline of the private investor, the numbers have fallen — but there are still 348,000, and ICI needs...

WALLACE Duncan Smith is the brick which fell out of the City wall, leaving a hole now put at £100 million. A household name it is not, but that does not limit the damage it can...

THE brakes are on at Canary Wharf, where no new tenant has signed up since last July. Mark you, if all the tenants whose imminent arrival has been forecast by the City press's...

The show must go on

Sir: Derek Tonkin's incessant reworking of a sequence running approximately 20 seconds in Cambodia: The Betrayal reveals the desperate lengths to which the author- `I'm still...

Sir: The evidence which John Pilger and David Munro produce

(Letters, 18 May) of alleged 'integration' between the three Cambodian resistance factions is suspect in the extreme. The 'joint operation' between Khmer Rouge and Sihanoukists...

Sir: Michael Lewis, in his waspish article (`Revenge of the wimps', 20 April) was entertainingly scathing about the rapacious 'self-regulated cartel of insolvency practi-...

Sir: I was most interested to read Andrew Roberts' article (Affray in the Channel', 27 April). It was a scandal that Roy Foster-Brown was not given the recogni- tion he deserved...

Sir: I'm finally hooked by the Battle of Tonkin/Pilger —

a form of diplomatic soap. One week I carefully read what seems to be a very straightforward, pre- cisely worded, statement from Mr Tonkin Only to discover the next from Messrs...

Sir: Andrew Roberts has his facts sadly wrong in his

tribute to 'the man who found a submarine which disappeared 40 years ago'. Foster-Brown was most certainly not the commander of the search; Admiral Sir Arthur John Power...

Sir: Not since Charles Moore suggested that dogs could not go to heaven because they do not possess souls have sentiments so cruel to the animal kingdom been expressed in The...

The unstoppable power of the dynamic duo

Too long a liberal

Alan Watkins A RADICAL LIFE by Mervyn Jones Hutchinson, f18.99, pp. 340 T he biography of Megan Lloyd George was to have been written by John Morgan, who knew her slightly. But...

Two against one's not fair

Strong drink — on the bare table a neat vodka, Innocently transparent as pure water, Shimmers before you, with your fence of bone (Stake shoulders, propping arms) set up around...

Raining in my heart

Patrick Skene Catling DAY OF ATONEMENT by A. Alvarez Cape, £13.99, pp. 221 A . Alvarez's third novel is what Graham Greene would have called an entertainment. It is a good one....

Sorry it's late, will this do?

William Scammell U AND I by Nicholson Baker Granta Books, f12.99, pp. 179 fi rst I made the usual phone call, to a man I've never met, sitting in a building I've never visited,...

Seeking out the Liverpool of the east

The lascivious pleasing of a flute

Charlotte Joll POLO S ince the publication of her first block- buster novel, Riders, Jilly Cooper has had a problem: how to re-create as compulsive a hero as Rupert Campbell...

I wish people wouldn't tell me How much better I am. It makes"me wonder How worse I was. Susan Harwood

Happy birthday, Humph Martin Gayford R eaders of The Lyttelton-Hart Davis Letters may from time to time detect a faint mystification on both sides of the corre- spondence that...

Transfixed by the tango Ruth Rees S ome years ago, at an international trav- el exhibition in Madrid, I noticed a large crowd gathering at the Argentina stand. Having...

On the road to Elsinore Gabriele Annan T om Stoppard's play Rosencrantz and Guildenstem are Dead is all words, word- play and semantics — impossible to imag- ine on screen....

The first 50 years Robin Holloway I t is nearly 50 years since the famous observation that 'modern music is growing old'. As the full century ebbs to its end the artificiality...

Dear old Dixie Taki A few minutes from the centre of Rich- mond, at the gateway to Virginia plantation country, lies Petersburg, where the longest siege in America's history...

Toodle-pip, old things Martyn Harris A I the good series are winding up at present, in line with the broadcasters' belief that like P.G. Wodehouse clubmen we are on holiday...

The end is nigh Zenga Longmore T here are times, are there not, when you feel yourself to be a lone coward, trapped in an unfeeling world of stark brav- ery. Ponder, for...

Gravy train derailed Jeffrey Bernard I have that sinking feeling that I used to get at the thought of going back to school at the end of the holidays. This week sees the last...

JANET is to be married the last Saturday in June and wishes to prepare Richard's breakfast on the Sunday, the first day of their life together. The trouble is she can't cook....

Brilliancy Raymond Keene A custom more honoured in the breach than in the observance is the award for the most brilliant game in any tourna- ment. In the late 19th century and...

'And, 0 my son, be on the one hand good, And do not on the other hand be bad; For that is very much the safest plan.' So Housman's Chorus intones in his side- splitting parody...

Cricketer most admired Frank Keating IAN BOTHAM'S recall to the England cricket side cheers me no end. Fingers crossed that old Beefy will bring home some bacon. Only 18...