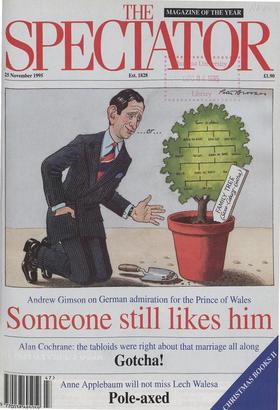 My God, hasn't she got any sense of moral duty? T he Princess of Wales broadcast to the nation, saying that she had had an affair with Captain James Hewitt; that, because of the...

Many on the Labour front bench loathe the Chancellor; the trouble is, it's the shadow Chancellor PETER OBORNE I t had to happen sooner or later. But most of us thought that it...

PEREGRINE WORSTHORNE I thought the pre-war Establishment came amazingly well out of Channel 4's tawdry even by their standards — programmes enti- tled The Traitor King. Having...

If we can't smack the children, let us at least flog the parents AUBERON WAUGH T here was a certain amount of ribald comment recently when Sir 'Terry' Burns, permanent...

Simon Sebag-Montefiore says Russia has plenty of women out of a sex-and-shopping novel; but, at home, they can't get enough shopping HER ACCENT was a mixture of French and...

THE REPUBLIC THE WORLD FORGOT

There is no point in denying that Northern Cyprus exists. Michael Church knows: he's been there DOES THE Turkish Republic of North Cyprus exist? Yes, shouts Turkey. No, say...

REDS UNDER THE BALLOT BOX

Lech Walesa has finally been defeated, writes Anne Applebaum, and Poland is becoming a normal country at last Warsaw ADMIRERS of proportional representa- tion, critics of the...

Con Coughlin attends an Israeli ceremony of excommunication and wonders i f the practice will spread Jerusalem TAKE a group of rabbis and place them in a secluded room with a...

A TAIWANESE television factory is to `create' 3,000 jobs in Lanarkshire, we hear. This is meant to be good news, but the word job is ambivalent at best. On 25 August 1829, the...

LABOUR, THE KING AND I

Lord Longford, aged 90 on 5 December says that he is still a socialist but that nonetheless he supports Mr Blair THE SUN newspaper, which I read regu- larly for reasons of my...

SENATOR DOLE IS A HYPOCRITE

But that is one of the reasons why Owen Harries finds him attractive, and wants him to be president WHEN I say that I like Senator Robert Dole I do not mean — as many do —...

Alan Cochrane says that what he now regrets about the 'Royal Rat Pack' is that he was too superior to believe them THEY HAVE been without doubt the most maligned group of...

L ADVERTISEMENTS of a volume entitled The Royal Family in Wartime left me cold and a little antagonistic; this kind of thing — cheap and a little toadyi ng — is so familiar....

Philip Delves Broughton says that for many children of Oxbridge, the soft jobs are out, so no jobs are in FOUR YEARS ago, an American film came out called Slackers. It...

persist. . . THE ORIGINS of science are lost in antiquity. Some argue that the forerun- ners of today's Nobel prize-winners were Mesopotamian necromancers; of this theory I am...

Cheer up, Prince William: history may well prove on your side PAUL JOHNSON M any shrewd observers think that Princess Diana's brilliant performance on television, while an...

A hollow clang and a recorded excuse Lloyd's gets resigned to it CHRISTOPHER FILDES L loyd's of London moved swiftly to restore confidence this week on news that the Lutine...

Sir: Having myself attended Nick Scott's reselection for the new

Kensington and Chelsea constituency, I can confirm the essential accuracy of David Rennie's account except for his statement: 'In 1977 . . . [Scott] narrowly defeated a bid by...

Sir: The meeting which selected Sir Nicholas Scott as prospective Conservative candidate for the new seat of Kensington and Chelsea (An impeccable host and guest', 18 November)...

Sir: Your correspondent, David Rennie, seems to have got the

wrong end of several sticks in his report on the selection of Sir Nicholas Scott in Kensington and Chelsea. For a start, I have yet to meet a 'Tory lady' who reads, let alone...

Sir: 'Even if our Head of State were an apo- litical president as in Germany, or the Irish Republic,' you write (Leader, 18 Novem- ber). This misses the point about the Irish...

Heat in the kitchen

Sir: All honour to Philip Hensher for mak- ing Delia Smith's his worst book of the year (Books, 18 November). He could have gone further, and called into question her moral...

Sir: Kevin Myers reminds me of a nice sec- ond

world war story. It is the Battle of Alamein. The Irish Guards have been in the thick of things. There is a brief lull in hostilities. In a fox-hole two sergeants have a quick...

Sir: Kevin Myers in his article (Dublin remembers too', 18 November) is 'immod- est enough to believe' that his writings in the Irish Times have helped to bring home to southern...

Sir: Should any of your readers visit L'Arni Louis as a result of Nigella Lawson recom- mending it in The Spectator (Restaurant, 18 November), it is important that they get the...

Sir: In response to Dot Wordsworth's col- umn 'Mind your language, 28 October' on the use of pro-choice and pro-life in the abortion debate, I would agree with her up to a...

Sir: I appreciate Sam Brittan's generous review of my book Accountable to None (Books, 18 November) but must correct the statement that the armed forces are an `astonishing...

Sir: Simon Jenkins misrepresents the argu- ments against violence in television news (Centre point, 18 November). In the debate he refers to, I made three points. Firstly, it is...

Sir: In his article 'Faux amis' (4 November) John Laughland jumped to a conclusion that was based on a semantic error. When President Chirac declared that the 'French State' was...

Sir: Carole Morin's silly letter (18 Novem- ber) reminded me how thankful I am that she was included in the exhilarating changes that you have made since you moved in (I...

Of no fixed index

Sir: Pace Peregrine Worsthome (Diary, 18 November) my friend John Wain died three years after the publications of Kingsley Amis's memoirs, so his snide comments were on the...

Sir: I must refute David Starkey's assertion that 'many of the dandies . • were gay' ("Tis in ourselves that we are hetero or homo', 18 November). In the 19th century, the...

Sir: A possible answer to Robin Holloway's question (Arts) — why new musical works are performed once and then disappear without trace — is that there is simply too much music...

Sir: I was under the impression that pornog- raphy was

freely available in specialised magazines for those attracted to such mate- rial but on 11 November you carried an arti- cle (Not quite Cinderella's ball') about sado-masochism...

To discover the peculiar genius of his nation, an Englishman should visit his parish church SIMON JENKINS I am stepping down from this column for a while to embark on a quest...

Books of the Year A further selection of books of the year, chosen by some of The Spectator's regular contributors Caroline Moore Justin Cartwright lost to Pat Barker ' s...

The future lies ahead, perhaps

M. R. D. Foot CHANGING ENEMIES by Noel Annan HarperCollins, f18, pp. 266 T his is a war autobiography with a difference: a leading intellectual's account of what it was like to...

Not so much a novel, more a work of reference

Jonathan Keates NUMBERS IN THE DARK AND OTHER STORIES by Italo Calvino, translated by Tim Parks Cape, £15.99, pp. 276 I f we accept the truth of that cliché, so beloved of...

Fifteen hundred, but only one rape

The higher the thicker

Gig. It's a word she uses all the time. She goes to lots and tells me about them After class. Gig. I like its sound, the way It begins and ends hidden in the back Of the throat....

Rhyme but no reason

D. J. Taylor PLAYING THE GAME by Doris Lessing, and Charlie Adlard HarperCollins, £6,99 A graphic novel by Doris Lessing stands rather high on my list of improbable books — a...

Spot the difference John Martin Robinson is unimpressed by the work of English Heritage V isitors, in Lord Burlington's tercente- nary (he was born in 1695), may have been...

Let it be Marcus Berkmann F or a long time it has seemed important to resist any suggestion that pop is, and always will be, a young man's game. Some of the cleverest and most...

Royal revenge James Delingpole D id any of you notice the leek-shaped thing stuck behind the picture frame just to the right of the Princess of Wales? You did? Damn! There...

Too good to be true? Alan Judd I n 1941, Henry Broquet, an RAF engi- neer, was sent to Murmansk with the first of 3,000 Hurricane fighters we gave the Russians. What he did...

The Queen and I Robin Oakley I n New Zealand for this year's Common- wealth Conference, the Queen went racing at the Auckland Racing Club's Ellerslie track to present the...

Kissing and telling Taki New York According to an English general, the definition of a gentleman is one who has never made a lady feel less than one, which, alas, makes your...

Haunted by the past Jeffrey Bernard I went back to Lambourn last weekend and approaching it from the top of the Downs I got that haunted feeling again as I always do when I go...

BRIDGE Double trouble Andrew Robson THERE IS great skill in knowing when to double the opposition. A hesitant auction and evidence that suits (especially trumps) are breaking...

Simply spiffing and at its peak Auberon Waugh I do not make any extravagant claims for the Slovakian Chardonnay( 1 ) which opens this offer, except that it is extraordinarily...

my father once what a chap should order when invited to a restaurant he did not know or trust. The reply was instant, 'grilled lamb chops'. The thinking behind the reply was...

Grand prix Raymond Keene THE SUPPORT OFFERED by Intel to international chess has come in two forms, funding of the world championship and the foundation of a speed chess grand...

A first prize of £25 and a bottle of Graham's Late Bottled Vintage 1989 Port for the first correct solution opened on 11 December, with two runners-up prizes of £15 (or, for UK...

Sports of unity Simon Barnes LAST SATURDAY I witnessed a terrible thing. A lone black man was set upon by a group of white South Africans. Most of them, inevitably, were...

Dear Mary. . Q. Last week's letter (18 November) from the friends of the man with dyed hair prompted me to write. A friend of my own has made the mistake of compensating for...