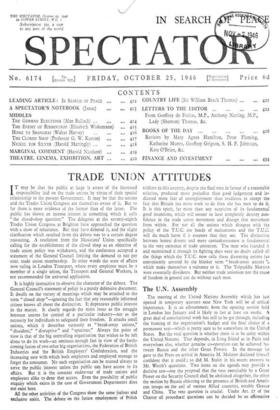 It is highly instructive to observe the character of the debate. The General Council's statement of policy is a purely defensive document. It dwells on the variety of meanings...

The meeting of the United Nations Assembly which has just opened in temporary quarters near New York will be of critical importance. It is an adjournment from the opening...

Anyone content to judge last Sunday's Berlin elections solely in the light of German comment would get a most curious impression— that of a stone cast into the water and...

The removal of some hundreds of German workers from Berlin and various parts of the Russian zone so readily gives rise to the worst fears that it is essential to know the truth...

The debate on housing on Monday was as lively as any debate opened by Mr. Aneurin Bevan is bound to be, but it produced no spzcial illumination. The Opposition attributed slow...

It would be a cause for heartfelt pleasure if Persian politics could be reserved for Persians. The recent rebellion in the Fars province was little more than an opportunist...

To describe the first day of the Foreign Affairs debate as a great Parliamentary occasion would be to use the language of hyperbole. The Foreign Secretary made a mammoth oration...

The paper situation having now improved (though supplies are still only 4o per cent. of the pre-war total), The Spectator will from next week consist of 32 pages instead of the...

The end has just been reached of the first full post-war holiday period which, ideally, covers the six months from mid-April to mid-October. In fact, as the past season has...

The Board of Trade, actuated no doubt by a laudable sense of continuity, can be relied upon to show that the overseas trade figures are neither as good nor as bad as they seem....

IN SEARCH OF PEACE

T HE sober tone of the debate on foreign affairs in the House of Commons this week chimed with the realities of the situation. The world is not at war, but it is far from having...

The resignation of Mr. T. L. Horabir. from the Liberal

Party in the House of Commons has the result of reducing the membership of that select body by over 8 per cent It now ha ir members in- stead of 12 (or, according to some...

The retirement of Mr.. Harold McKenna from the bench deprives the London magistrates' courts of a notable figure. Mr. McKenna has sat at Bow Street since 1936 (there was some...

I have been involved in some discussion about whether the

new verse of the National Anthem, sung at the United Nations service at St. Paul's on Sunday, is better or worse than the one it displaced. Manifestly it could not be worse ;...

M EMBERS of the Labour Party, in appealing to the President of the Board of Trade from time to time to release more newsprint for the daily papers, have urged the desirability...

An unusual feature of Oxford and Cambridge this term is

the married undergraduate. He was not quite an unknown phenomenon before the war, but now he forms quite an appreciable percentage, perhaps 7 or 8 per cent., of the new entries....

I am very glad to hear that the memorial to

Eleanor Rathbone is making good progress, and in particular that a large number of small sums from small people have reached the treasurer of the fund. That is what Eleanor...

The announcement that Spurgeon's Tabernacle at Newington Butts is to

be rebuilt on a new site seems to give some excuse for recalling the story of the Baptist fish Spurgeon was passing a fishmonger's shop in South London and noticed on the slab a...

A good many people probably heard the name of M.

Malenkov for the first time when they read the article on " Stalin's Successor in The Spectator a fortnight ago. The attention drawn to this little- known personality has soon...

The Bishop of London's committee on the City Churches seems

to have reached sensible, though by no means drastic, conclusions. The damage done in the blitzes was extensive, but not, in many cases, irreparable. Actually only five churches...

I don't know whether the quip about Truman fiddling while

Byrnes was roaming has appeared in print before, but it seems worth risking. JANUS.

THE ENEMY OF RIBBENTROP

By ELIZABETH WISKEMANN " HOULDN'T there have been some Italians as well? " the hair- dresser asked me on the morning of the Nuremberg executions. " Italian major war...

By WALTER HARVEY L IFE in Shanghai among British residents resembles Rip Van Winkle's experience after his awakening. True, there has not been a forty years' sleep, but so...

By PROFESSOR G. W. KEETON T HE claim of trade unionists to establish a closed shop in every type of paid employment is an issue which unfortunately has been confused with...

By HAROLD MATTINGLY A ND so it seems that the chapter of silver coinage in this country is drawing rapidly to its close. It has been a long chapter, an interesting and an...

YOUR CHRISTMAS GIFT a TO FRIENDS AT HOME AND OVERSEAS

We will send a greetings card stating that the subscription is a present from you. Send your instructions with a remittance to "THE SPECTATOR," 99, GOWER 4 .% ,t1 STREET,...

By HAROLD NICOLSON HE Exhibition of the King's Pictures which is just opening I at Burlington House provides a panorama of British history and a display of superb works of art....

Upon what principle does the picture-going public base a visit to any particular exhibition? Is it a monthly or fortnightly or weekly routine, a matter of habit only, or is it a...

"Much Ado About Nothing." By William Shakespeare. At the Aldwych. THIS is a competent production of a comedy which is no longer the favourite, either with audiences or with...

International Film Show at Cannes IT is perhaps significant that on a reel of film, as projected in a cinema, the picture is printed sixteen frames behind its accompanying...

"New Homes from Old." At The Tea Centre, 22, Regent Street, W.1. ONE of the most attractive features of this admirable little exhibition on House Conversion, organised by the...

The herbaceous border is improved by the addition of a few shrubs. Among the most suitable is the hybrid buddleia. In the fourth week of October its flowers, half tassels, half...

Blooming of Flowers in October

This autumn has some oddly unseasonable features. In the middle of October, a rarely late date, those beautiful and in many districts rare butterflies, the clouded yellows, were...

The full arrival of autumnal coloration has seldom, in my memory, been so long postponed, and it may be that its enjoyment will be briefer than usual. A frost sharp enough to...

A NEW farming scheme, partly the result of the international urgency expressed at Hot Springs in 1943, comes into operation in Britain this month. It is hoped that this advisory...

SIR, —With reference to the gravity of the situation regarding the

shortage of coal, the following table may be of interest. It should be emphasised that the output capacity of the industry in 1938-39 was in the order of 28o million tons per...

AUSTRIA'S FUTURE SIR,—Writing from Vienna, after a year's experience of conditions in Austria, I should like to be allowed to elaborate, if somewhat belatedly, on the excellent...

SIR,—I read your gloomy comment on "Winter Coal " with dismay. Must you join the ranks of those who keep up the spate of uninformed and unsympathetic criticism of the miner? And...

candidates who had served in the R.A.F. during the late war were elected to Parliament for the first time at the General Election in 1945. Of these men, all but four, one of...

SIR,—I did not say that working-class members were given no

encourage- ment to speak at Blackpool ; what I said was that they were given no encouragement to stand for Parliament in the Tory interest. Hence . the Conseivative Party is...

SIR,—I was very, much interested to read the correspondence in

your columns about the Tory conference at Blackpool. Mr. Rawlinson implied that he was a " moderate supporter " of the Conservative Party. I do not know whether to regard this...

SIR,—It so happens that the letter from Miss Mary Thomas published in your issue of October 4th was brought to my notice just after my husband and I had finished reading the...

Rawlinson's letter in your issue of October nth is both

interesting and provocative. Without a detailed report of the conference it is difficult to question the veracity of his statement that Viscount Hinchingbrooke and his...

SIR, —The publicity of your columns may help to discover, what the General Manager of the Southern Railway declines to tell me—namely, what the railways require their train and...

PRIVILEGE IN THE ARMY

should like to express my sincere agreement with Mr. Richard Rumbold when he explained in his letter the difficulty encountered by a private soldier in putting forward a...

SIR,—The second of Mr. Alan Bullock's articles on Communism contains barely half-a-dozen sentences that are not as aptly - descriptive of Nazism. If Mr. Bullock is an "...

THE POET AT THE EOOR

Sus,—If Mr. Patric Dickinson proclaims from your columns that Humbm Wolfe's poetry was an appetising and temporarily fashionable draught whose mere effervescence it only needed...

SIR, —From•where does Mr. Dickinson get his quotation: " From words,

not ideas, poetry is made "? The saying is, of course, French, made b9 a poet to a painter-poet who 'complained that, though he was full of ideas, he could not write a line. I...

SIR, -It is to be observed from Home Office announcements in the daily Press that large numbers of persons are likely to be naturalised in the near future, mostly emanating from...

The Pageant of the Years. By Philip Gibbs. (Heinemann. 18s.) SIR PHILIP Glans' life has been, to use a conventional phrase, crowded with incident and it is a defect in his...

A Boswell Without a Hero Alexander Woolleott, His Life and His World. By Samuel Hopkins Adams. (Hamish Hamilton. 12s. 6d.) A GREAT many of us heard the voice of Alexander...

Mucu misunderstanding between people speaking different languages comes from the confusion of words similar in form but far apart in meaning. So too there is a misleading way of...

An Attack on Modern Art

Figures of Thought or Figures of Speech. Ananda Coomaraswamy. (Luzac. 10s. 6d.) WHEN Mr. Michael Ayrton argued in a broadcast that Picasso was a black magician, it was as...

The Stormy Dawn appears to be a first novel, and in admiration of it one is tempted to pun on its author's names, for indeed its pasture is new and it is a book for the...

IT is a pity that the publishers of such an important book as this should not have been more informative about the author. Mr. Draper's style—although not his spelling—suggests...

This Weather of Ours. By Arnold B. Tinn. (Allen and Unwin. 10s. 6d.) THIS very readable account of British weather aims at nothing abstruse. It is written for the man in the...

[A Book Token for one guinea will be awarded to the sender of the first correct solution of this week's crossword to be opened after noon on Tuesday week, November 5th....

SOLUTION TO CROSSWORD No. 396

By TERENTIUS THERE is certainly a much better atmosphere about the House this week, the volume of business stimulated by the 3 per cent. Local Loan redemption being sufficient...