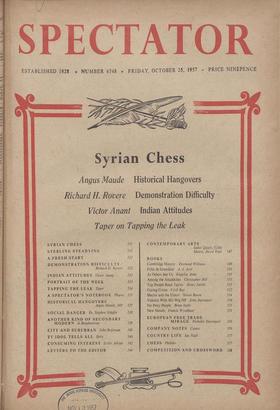 T HE development of the Syrian affair provides a very good illustration of the fact that events in the Middle East always have two meanings : the significance they bear in...

T HE appointment of Sir Hugh Foot, the Governor of Jamaica, to be the successor to Sir John Harding in his uneasy proconsulship in Cyprus may mark a turning-point in the...

By RICHARD H. ROVERE No doubt the President would be delighted to visit with the Queen at any time, but her arrival last week must have seemed especially felicitous to him. It...

.econ omic recovery of sterling, on which future .1 economic policy entirely depends, not only continues to gain strength, but is, at the same time, changing its character. Over...

By VICTOR ANANT T T is unwise to return late at night to a place you know well. By day I would have recog- nised and rejoiced, but at night my anticipation had an edge of...

The anxiously awaited debate in the General Assembly of the UN on the Syrian question proved so much a waste of time that it was adjourned until the end of the week. It had con-...

Tapping the Leak SLOWLY, slowly, Cape St. Vincent to the north-west dies away; the strains of 'I do like to be beside the seaside' become ever fainter; the Labour Party sternly...

THE STORY sent in by the Middle East correspon- dent

of Le Monde and recounting the purloining of an American diplomatic bag as it was being taken across the Bosphorus in a boat is in the best tradition of the modern thriller. It...

MR. MUGGERIDGE'S prematurely famous article on the Monarchy in the

Saturday Evening Post turns ° tit to be a skilful and sophisticated piece of d e 6 Linking. Admittedly in the end he comes down on the side both of Monarchy as an institution...

I SUPPOSE that the time of the Motor Show is

an appropriate one for the Prime Minister and the Minister of Transport to pronounce on the subject of the roads, but their pride in spending a few more millions this year than...

THERE IS no particular reason why the Sunday Dispatch should employ Mr. Muggeridge if it does not want to, but the ending of its arrangement with him is puzzling. It must have...

FROM AN ADVERTISEMENT in the Observer:

Richard Church THE GOLDEN SOVEREIGN A second volume which is better than the first . . . together with Over the Bridge, it com- promises, one of the best autobiographies of...

HAVING YEARS AGO enjoyed Leslie Howard in The Scarlet Pintpernel,

1 decided to watch it on Com- mercial Television on Saturday night. The film was interrupted five times by advertisements. None of the interruptions was for less than two...

A Spectator's Notebook IT IS NOW one year since the

Hun- garian revolt and its brutal suppres- sion by Russian tanks. No doubt history will find reasons to excuse the Soviet leaders for what they did —they were certainly the...

By ANGUS MAUDE, MP T HE Party Conferences are over and things are much as they were. Apart from the pas de trois danced by Mr. Bevan, Mr. Cousins and th e Bomb, whose...

By DR. STEPHEN SCHAFER . A FTER the first bloody but hopeful days of the Revolution had , passed, the new Hungaria n People's Government made a number of a l. ciliatory...

Another Kind of Secondary Modern

By A HEADMISTRESS T ms is a mixed rural secondary school in the I Cotswolds. There are some 400 children drawn from the small town where the school is established in temporary...

By JOHN BETJEMAN M os - r people who know Oxford know that unexpected stretch of country between Godstow and Botley. It is a land of meadows, willows, poplars and small streams...

By STRIX T FTIHE bookcase was real, in so far as anything there could be so described, but the books in it were not. They were a trompe-!'tail, a black and white photostat of...

By LESLIE ADRIAN M ANY of you have kindly written with sug- gestions for new restaurants, and I am hoping soon to produce the revised list of Spectator-approved restaurants....

KEEPING UP WITH THE RICES

Sin,—Forgive me. but I thought 'Keeping up with the Rices' by Christopher Hollis exceptionally silly. Why do middle-aged men of letters persist in affecting puzzled superiority...

SIR,—The letter in your issue of October 11 from a

rabid Young Liberal demands a reply from a Young Conservative. This I will endeavour to give. Individual Liberals have, no doubt, decided views on the principles and aims of...

S1R,—May I reply very briefly to the two ladies who

rallied to the defence of Mansfield Park in your last issue? I did not imply that Fanny Price speaks harshly to anybody but Henry Crawford; forthrightness is not her strong...

Sin.---Mr. Hollis wrote a very interesting article in your issue

of October 18. There is one small point which I should like to make : he wonders who the angry young men are and picks on Mr. Osborne as the probable one. I do not know Mr....

ACCEPTING THE UNIVERSE Sta,—Wasn't it Margaret Fuller, the New England

SIR,—One aspect of the Church's attitude to divorce appears to be often forgotten. She bases her ruling on the remarriage of divorced persons on the words of the Gospels (St....

THE MUGGERIDGE ARTICLE Stg,—The writer of your last week's 'Notebook'

says that as he has not read the Muggeridge article 'com- ment is impossible'—and goes on to comment. Admittedly there was only a stinging lunge at the Romanoff reference; but...

StR,—Anyone so bold' as to publish a book about Oxford, while actually living in the place, must ex- pect a great deal of criticism—particularly from those who have not read the...

ROME AND THE SARACENS

SIR,—Attempting to correct your contributor An - thony Hartley, Mr. Michael Swan writes : 'Most fifth-formers should be able to tell him that the Saracen sack of Rome and St....

SIR,—While applauding Strix's article on the new fashion of `Knocking the Palace,' may I recall lines of Canning which are so apt to the ludicrous con- troversy opened by Lord...

SIR,-1 had hoped that my article on ' Passchendaele,' concluding with Lord Trenchard's estimate :"Tacti- cally it was a failure, but strategically it was a suc- cess, and a...

Physiognomy A Face in the Crowd. (Warner.)— The Three Faces of Eve. (Carlton.) — My Man Godfrey. (Leicester Square Theatre.) — The Little Hut. (Empire.) — The Bolshoi Ballet....

OCTOBER 27, 1832 FIVE persons were tried at the Middlesex Sessions, on Saturday last, for theft. The united value of the articles charged as stolen amounted to 5s. 71d. Most of...

Cambridge History By DESMOND WILLIAMS O VER fifty years ago, Lord Acton planned the outline of a universal history which was to sum up the historical research of preceding...

As Others See Us

The British. By Drew Middleton. (Seeker and Warburg, 25s.) ONE of the nasty things about the British—in other respects an amiable enough crowd—is their neurotic delight in being...

Religion and the Rebel. By Colin Wilson, (Gol- lancz, 2 Is.) MR. WILSON'S new book is a sequel to The Out- sider. Just as Camus attempted in L'Hontine Revolle to show how the...

IF Professor Trevor-Roper did not exist, it would be necessary to invent him. His clear-cut, bril- liantly argued, convincing and wrong hypotheses about seventeenth-century...

The Statesman. By Henry Taylor. (Heifer, 18s.) THERE are two reasons for reviewing this book (first published in 1936) with some care. In the first place, it is an important...

THIS is an important book. Its authors' argument, unlike that of many other abOlitionists, is that not merely is the death penalty barbarous, but that it is an anachronism that...

Hector and the Elders

Friends, Foes and Foreigners. By Sir Robert Robertson, 16s.) Tun: first five of these books are autobiographical —the marketable but slightly bruised fruit of long lives. The...

Voltaire With His Wig Of

ONE of the functions of the writer is to com- municate pleasure; like all arts, that of pleasure can only be enjoyed by the practice of various disciplines. As one reads Miss...

' WE are no petty people,' Yeats said of the Anglo- Irish. 'We have created most of the literature of this country. We have created the best of its political intelligence.' But...

Schloss Felding. By Edith de Born. (Chapman and Hall, 14s.) • A Houseful of Love. By Marjorie Housepian. (Gollancz, 13s. 6d.) LET no one be deterred from reading Schloss...

By NICHOLAS DAVENPORT IT was fitting that Mr. Maudlin should have attended the recent OEEC dinner in Paris in a 'grey- blue' dinner jacket, for there is a half-tint to the whole...

By CUSTOS d. SOME New Yorkers stayed away . . , from the Queen's arrival at th e itil . Battery, having more urgent things to do. These were the brokers in near-by Wall Street...

'Well, it's like China tea. You crooks your little finger when you drinks it an' tries to look as if you never dug your elbow in anybody at a jumble sale, refined-like.'

J Ack:DAWS Jackdaws are, to me at any rate, much

more in- teresting birds than mere crows. They are enter- Prising, busier about their daily lives altogether than the greater corvidx. They have a restlessness that marks the...

By IAN NIALL 01 -o Boa, who lives at the back of beyond but has electricity in his cottage. stopped me the other day to ask if I had seen something on television. I had to...

By PHILIDOR No. 124 Specially contributed by D. BRUMA (The Hague) BLACK (10 men) WHITE (7 men) WHITE to play and mate in 2 moves: solution next week. Solution to last week's...

When I first used to fish for trout, with a piece of brown line and short length of gut on my spruce- pole rod, my bait was a red-streaked worm dug at the midden's edge....

The tonal prize of six guineas' was offered for a translation of La Ceppede's sonnet on the Passion: A a x monarques vainqueurs la rouge colic d'armes A ppailient justement.Ce...