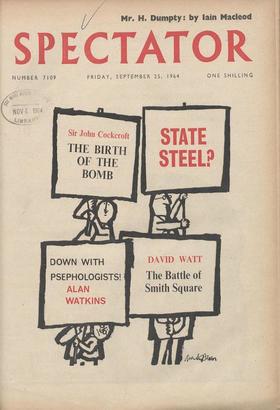 THE BIRTH OF THE BOMB

—Portrait of the Week— ONLY THREE MORE WEEKS TO GO,

and the opinion polls showed the 'Don't Know' revival continuing apace. The Prime Minister was challenged to a TV debate by Mr. Wilson, who was challenged by Mr. Grimond, who...

rival, Mr. Heath, from the job of con- ducting the Conservatives' daily news conference of the campaign we shall never know. Did the Prime Minister originally want Mr. Heath to...

By ALAN WATKINS I N the next few weeks a small group of academics and near-academics will find them- selves in a position undreamt-of by even the most worldly Balliol don of...

From MURRAY KEMPTON NEW YORK O N the first day of school, the most con- spicuous muster of pickets and the most serious boycott of classes by white Americans protesting...

Perilous Weekend By RANDOLPH S. CHURCHILL T HERE is never a dull moment in Fleet Street this autumn. This week we have the Weekend Telegraph, printed and bound in Darmstadt,'...

Voters elsewhere may be in doubt What they're supposed to vote about. At least they find the process easier Than it is proving in Rhodesia. There Mr. Smith has bid them note...

From SARAH GAINHAM BONN H is Honour the Mayor of Heilbronn (popu- lation 93,058 on September 30, 1963) is much exercised about the duty to declare his town 'white' . according...

David Watt has recently been commenting in the Spectator on the colour problem in Birming- ham, and on the attitudes of political candidates to it. We should count our...

The Sword• that Heals

The most striking quotation in the book is Dr. King's definition of non-violence. 'Non- violence is a powerful and just weapon. It is a weapon unique in history, which cuts...

YORK PLACE, the magnifi- cent town house of Cardi- nal Wolsey which became the London residence of Henry VIII, survives now only through the 'new' Banqueting House in Whitehall...

Enter the Participant Robert Conquest, in the last 'Spectator's Note-

book' before the change of editor last December, wrote: `I understand that there is no truth in the suggestion that this column will in future be called "A Participant's...

Dark Outlook `We expect to throw open our pages to

promote a free and frank, if balanced and objective, dis- cussion of issues and problems that matter.' Not, in fact, a pre-dawn blurb from Mr. Hugh Cudlipp, but part of Mr. I....

Cassandra in the Daily Mirror is always angry and often right. But not in the assumption which led his story on Monday--that Tories end their annual conference by singing 'Land...

By EDWARD T. JUDGE - ED MAIN now struggles to maintain a good Jastandard of living in a highly competitive world. More than ever before we need the utmost efficiency in...

is not always easy to shift an argument about a poet to a true level of inquiry, as the com- batants forget that it is the poetry that matters, not • what they say about it....

SIR.—I have just seen Mr. Rhodes James's article, and if it is not too late I. would like, as a fOrmer UK official historian, to offer some comments on it. 1 agree with him...

SiR,--This Spectator reader does not know every- thing and cannot even tell Quoodle about a restaur- ant 'boasting' a wine-list with more forceful sucker- appeal than that which...

SIR.—Mr. John Tripp, in the Spectator of September 11, seems

depressed by the evidence that Dylan Thomas constructed poems by putting down the rhymes first and then backing into them. One is driven to wonder how common a poetical practice...

September 11) is obviously the result of misreading my earlier letter. 1 merely included the 'baffle' comment by Thomas as an ironical footnote, and did not imply in any way...

MEGATONS ON THE MOTORWAY

SIR,—As a schoolmaster, may 1 say that the 30 m.p.h. limit imposed in 1934, the year when there were more fatal road accidents than ever before, or, 1 believe, since, has been...

ON CRICKET AND CHESS

SIR,—The Greek Test cricketer referred to by Michael Llewellyn Smith (September 4) was X. Balaskas, a leg-break bowler who was a member of the South African side which toured...

SIR.—In the Spectator of September 4 there is a mis- take in the chess problem: BLACK has a pawn on his first row, which is against the laws of the game; this does not actually...

Sia.—In reviewing The Mystery of Moral Re- armament, John Mander

was less than just in one respect. I hold no brief for Mr. Thornton-Duesbury nor for his beliefs, but it is perfectly accurate for anyone to infer that, as Master of St. Peter's...

SIR,—Mr. Churchill could have been a little fairer in last week's article on the Sun's advent. Its publication was historic. As the only new national newspaper to be printed...

SIR, —It is not in character that Mr. Randolph Churchill should resort to woolly phrases, devoid of clear meaning. Yet that is what he does in com- paring the Sunday Times and...

SIR,—I object to the way you seek to fob off

D. E. Morgan's protest at Watchman's language about Scotch and Welsh nationalists and their aims. The use of such boo-words as 'dotty' and of 'supercilious phrases like 'their...

THE WAR THAT CANNOT BE WON

SIR,—It seems to me that there is a touch of the rancour of expatriate officers in the letter of Mr. George Bilainkin. There is also present, I think, the usual over-confidence...

AN ELEPHANT IN THE DARK

SIR,-With 'An Elepllant in the Dark' Mrs. Doris Lessing opens her admirable account of Sufism. This best of all fables is current traditionally throughout the East. I wonder if...

NI:VILE WALLIS writes: Max Beerbohm once made a delightful carica- ture of Clive Bell and Roger Fry, those close confederates of Bloomsbury, debating to what further excesses...

By CHARLES REID In choosing to open their 1964-65 season with Gounod's silver-gilding of Goethe, the Wells management did no more than accede to a peren- nial craving; and to...

fencing or waste ground, urban or industrial object, is transmuted

with her peculiar gravity and at times a surprising grandeur—no. matter on how small a scale she works. It is significant that the artist, who was born in 1919, spent most of...

Problems of Orthodoxy • By MAURICE COWLING W HATEVER the intentions of their founders or professions of their present managers (and despite the existence of Oxford and...

THE late Alfred Duggan had many gifts as a historical novelist. Deep scholarship displayed without pedantry, a communicable delight in storytelling, unobtrusive accuracy of...

Sonnet for the Class of '58

No longer students and not likely to succeed, Tonight I remember old friends, scattered far, Who wanted so much once, and now need Only a rise of a hundred pounds or a car Or a...

I THINK the novels of Elizabeth Taylor have been greatly under-rated. True, she gets a very good press (see back-flap of her new book), but she is hardly one of the novelistic...

IN 1768, before too many Scots had quite grasped how much more effectively they could control Britain from London, a couple of enterprising Scottish mechanics launched from...

LEN DEIGHTON'S anonymous hero of Funeral in Berlin (Cape, 18s.) stubs his toe against both types of political extremism with the weary resignation of one who has signed away his...

The Rich American Voter By NICHOLAS DAVENPORT SIR ALEC must be envying President Johnson the eco- nomic part of his elec- tion address. The racial problem apart, the Ameri-...

B y LOTHBURY As reported in last week's issue, highly satis- factory rest:ills were achieved by Unigate for 1963-64. The sharp rise in the pre-tax profit at £4.307 million as...

By CUSTOS I the chart of prices for industrial shares in 'London is superimposed on the chart of the political opinion polls it will be seen how 'political' our markets have...

The Price of Service By LESLIE ADRIAN It has been a cherished opinion of mine for Years that travellers always spend too much because their price reactions are slowed down by...

By TIM HEALD When 1 first met the Morminos they had been trying to get out of Tunisia for the previous nine days. Every time they got on to a plane the gangway would be wheeled...

The Devil in the Machine

By MARY HOLLAND During the first weeks of terror, when a new sound seemed to start up whenever I plugged in another gadget and any which were already working seemed to change...