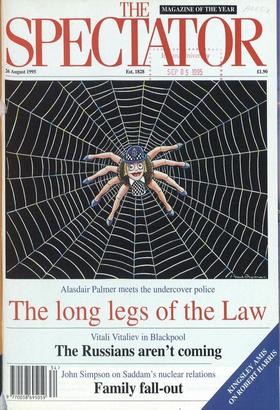 A Government report, three years in the making, recommended that water should be saved by introducing metering of domestic supplies; but it was satisfied that the limitation of...

VICKI WOODS M y Oxford friend's daughter, aged 17, was arrested last week at Faslane. She was protesting against the Trident submarines and was held for seven hours, with half a...

Alasdair Palmer was the first journalist to interview an undercover policewoman. He discovers that in her profession moral purity and effective policing do not always mix 'IT...

NOT YOUR ORDINARY NUCLEAR FAMILY

His sons, sons-in-law, half-sisters and cousins may cause trouble, but John Simpson thinks Saddam Hussein might reign for some time yet Amman IT WASN'T, naturally enough, the...

persist. . . WHAT DOES experience teach? Only this: that Man (in which designation I include Woman) learns very little from the whole sorry business. Even those who, like me,...

Haiti is a magnet for American do-gooders, writes Anthony Daniels, who doubts whether they can help the Haitians Port-au-Prince SOME of the streets which run into the busiest...

MORE ON who/whom. Mr Brian Glanville, the newspaperman, writes to complain about the mistake often made by those who `are trying to be terribly pseudo-exact and use whom, an...

THE RUSSIANS ARE NOT COMING

Vitali Vitaliev gets to the bottom of a British seaside summer story Blackpool Gleaming City of Happiness, Blackpool is a superb and unforgettable British resort. It is full...

Mr Harold Isadore BERENS, of 3 Parldand Court, Addison Road, London W14, the music-hall comedian, who became a national celebrity for his per- formances on the popular wireless...

PEACE WHICH THE WORLD CANNOT GIVE

Charles Moore meditates upon the unusual magic of English churches IT IS OBVIOUS, but no less important for being obvious, that people visit old church- es for a thousand...

IT WAS not surprising that the debates on the United Nations Charter in both Houses of Parliament on Wednesday and Thursday were dominated by the menace of the atomic bomb. Mr....

Clearing up the mystery of a love affair 40 years ago PAUL JOHNSON J ust occasionally a document comes to light which throws a brilliant ray of illumi- nation into a dark...

Scratch a card and sniff a growth industry, set to pay off in Mustique CHRISTOPHER FILDES G rowth industries — of course we still have them. I dare say we lead the world in...

Sir: By the time this letter is published, I trust

Bermudans will have voted `no' to independence in another of their periodic referenda. Malcolm Gladwell presents a good case for maintaining the status quo, but fails to go to...

Sir: I would like to know on what evidence you base your assertion: 'London's public transport must surely be the worst in the developed world' (Leader, 5 August). Quite apart...

Sir: I could not be more thrilled by the appearance

of a 'Not motoring' column in your Arts pages. When the 'Motoring' col- umn appeared a few weeks ago, only lazi- ness prevented me from cancelling my sub- scription...

Bombay fix Sir: Sarmila Bose ('Enough guilt for every- one',

19 August) states that unarmed crowds in India were machine-gunned from the air in 1942, when Gandhi launched the 'Quit India' movement. At that time, I was in command of RAF...

Sir: It is not possible for me to ignore the untrue accusations in your article 'Now then, what seems to be the trouble?' (29 July). I regret that I did remove the ovaries from...

Sir: I enjoyed Malcolm Gladwell's article about Bermuda ('Where the British sun never sets', 12 August). I would only men- tion one small point. I do not think I am despised in...

Sir: The largest voluntary recruitment for military service ever seen

occurred in India during the second world war. Two million men enlisted to fight for the Raj. The spearhead of Wave11's desert army was the 4th Indian Division, which smashed...

Sir: I had hoped that Ross Clark's visit to the River Test would have resulted in something more enlightened than a rather sour and confused polemic about public access ('Flora,...

Sir: Apropos the commonly held view that the dropping of A-bombs saved millions of American and Japanese lives ('Let's call it slap-a-Jap week', 5 August), allow me to say the...

Sir: With regard to the naming of the future Euro-currency, could I suggest 'Pieces of Eight'? This has sufficient nauti- cal undertones to satisfy the British. D. Nicholls...

The greater the truth

Oleg Gordievsky THE KGB LAWSUITS by Brian Crozier Claridge Press, £12.95, pp. 294 B rian Crozier, a talented journalist and writer, who is a major authority on Com- munism, has...

No riddle wrapped in no mystery

Kingsley Amis ENIGMA by Robert Harris Hutchinson, £15.99, pp. 390 T his is the sort of book one takes on holiday, looking forward to a nice, reason- ably thrilling read with...

The taming of the shrewd

G. Cabrera Infante KISSING KATE by Barbara Learning Gollancz, £13.99, pp. 250 K atharine Hepburn (called by some friends and her biographer Kate as in Kiss Me, Kate, the...

Anita Brookner WINTER JOURNEY by Isabel Colegate Hamish Hamilton, f14.99, pp. 200 I sabel Colegate has proved herself to be thoroughly at home with the deceits of time and has...

Accountant of the Lost Ark

William Dalrymple AUREL STEIN: PIONEER OF THE SILK ROAD by Annabel Walker John Murray, £25, pp. 393 T he oddest thing about Aurel Stein was that, despite living the life of a...

Gillian Tindall A FOOL AND HIS MONEY by Ann Wroe Cape, £15.99, pp. 244 S ince almost all of us are fated to pass not only from life but from memory, the idea of random,...

Hosing at last light, and wondering just how domestic he can get and knowing all too well the price of what he settled for and doubting what may come of it beyond such happiness...

Edinburgh Festival Not in for a big surprise Rupert Christiansen weaves his way around the good, the quite good and the utterly disgusting A slight pall hung over Edinburgh...

This man is special Richard Osborne T he great German conductor Wilhelm Furtwangler was 68 when he died, not by his own hand but almost certainly by his own volition. That was...

The come- back kids Marcus Berkmann T he face looks familiar, even if the jet- black pencil moustache and accompanying goatee beard don't ring any bells. That may be because...

Tingling pulses Robin Holloway M alheur' was Stravinslcy's private nickname for Mahler, though he took care in his published Conversations to adopt an emergently-correct...

Edinburgh frights Ian Hislop I t is almost impossible for me to write this column after the extraordinarily high stan- dards of television reviewing set by Nigella Lawson last...

Electrifying effect Gavin Stamp t is a curiosity of London's railway histo- ry and geography that there are only three north-south through routes across the Thames. All were...

Hit or myth Taki Gs taa d right shin while competing in a Greek karate tournament. It was a compound frac- ture, with some bone showing through the skin, making it obvious...

Naked gambles Carole Morin A istair the student moved to Brighton after graduating because of its reputation as a love and drugs capital. Five days later, he wrote to complain...

A new tonic Jeffrey Bernard t has just been pointed out to me that I could write about the heat as everyone else has and still does. And it is true but I wish that they would...

Here was a Caesar! Nigel Nicolson O n Saturday this week we ought to be celebrating another anniversary of immense significance in our rough island story. It was exactly 2,050...

Full marks Andrew Robson IT IS RARE that a 2NT opening bid (20 - 22 points) pre-empts the opponents out of making a game contract. This week's hand from the British Premier...

IN LIFE there are a few restaurants to which I

return again and again; in these pages I try not to retrace my steps too often. I have no desire to pursue novelty, but I would prefer to avoid repetition. Still, after nearly...

JURA ,,,,t 4411SCUICH NNW COMPETITION Eye-rhymes Jaspistos IN COMPETITION NO. 1895 you were invited to write a poem with rhymes between words that are spelt as if they...

Tempora mutantur Raymond Keene AROUND this time of year I normally write something about the Lloyds Bank Masters tournament. Indeed, in 1981, I wrote about it with more than...

CROSSWORD 1224: Sixes and sevens by Doc

A First prize of £25 and a bottle of Graham's Late Bottled Vintage 1988 Port for the first correct solution opened on 11 September, with two runners-up prizes of £15 (or, for UK...

A perfect 89 seconds Simon Barnes MY HERO of the week is unquestionably Vinny Vecchione. The best form of farce teeters on the cusp of tragedy, and it takes a master of timing...

Dear Mary.. Q. My wife and I have a number of Ameri- can friends of whom we are very fond. On the occasion of our wedding, and of the births of our children, those friends have...