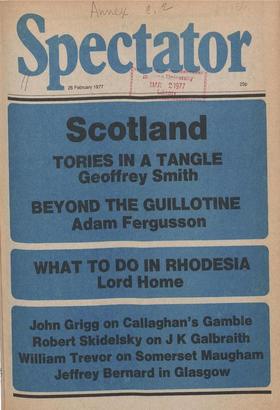 The Government's defeat on Tuesday night is one of the happiest Parliamentary events for a long time. It now seems certain that the wretched Scotland and Wales Bill Will fail...

Breath-taking gamble John Grigg Mr Callaghan's appointment of David Owen to succeed Tony Crosland as foreign secretary is the boldest act of his premiership. At a time of...

After more than two months' extra drinking tune (Scotland finally won an extension from 10 P.m. to Ii p.m. last December) there is an air of puzzlement about So far, no police...

The National Health Auberon Waugh I followed Mr Crosland's agony from a hospital bed in another part of the country. Obviously, this is no time to institute one of those...

Nicholas von Hoffman • Washington President Carter, who is widely suspected of wearing blue jeans under his white shirt, tie and jacket while seated at his desk in the Oval...

Time for a Rhodesian settlement

Lord Home In the years between 1965 and 1976 the American administration took little interest in events in Southern Africa. Rhodesia in particular was a problem for which the...

Devolution and not saying what you mean

Geoffrey Smith I n an article last week I recounted how the Conservative Party came to fight the 1970 election with a commitment to the principle of a Scottish assembly. It was...

Adam Fergusson A stirring lead story was carried two weeks ago by the Troon and Prestwick Times, whose reporter had just run his own public opinion survey on devolution in...

Glasgow belongs to them

Jeffrey Bernard Not long ago, two or three of the members of the staff of this journal had the mad idea that I should go to Glasgow to record my impressions of the place. I was...

If Crosland were Chancellor Nicholas Davenport Saddened by the death of Tony Crosland memories crowd in of happier days—one especially in 1950 when I was motoring Dick...

Terrorism and punishment— Sir : In your leader of 19

Sir: Of the eighteen second class letters Mr Sydney Norgate (12 February) alleges were delayed seventeen were in fact delivered on time. Under arrangements agreed with the Post...

Sir: Whatever the state of mind of Miss Anna M.endleson,

your rejection of Tory protests at her release ignores the effect on Ulster. Ministers from both parties have tried to disabuse the IRA of the belief that convicted bombers and...

Sir: Your correspondent, S. Norgate. shows a petulant bias that does not make for a clearly balanced case.

The eighteen letters were paid for at sesond class rates. Surely he cannot expect the executive suite for fifth-floor back tariff. (Seventeen second class letters posted ,...

Sir : I wait with impatience for Mr KingsleY Amis to write a word in defence of his favourite bookshop. Graham Greene Antibes, France

Sir: John Gouriet or Robert Moss may we ll respond on behalf of the National Association for Freedom to Ferdinand Mount's fundamentally friendly study (19 February ). But there...

I did not find the Mutual caressing that went on between Mr Andre Previn and Mr Edward Heath at all edifying'. I should be obliged if Mr Watkins would explain exactly what he...

Merseyside arts Sir: Though I agree with much that Norman

R osenthal says about Roy Strong's proposal to disband the V&A's Regional Services rie partment—a proposal that has now been accepted by the Secretary of State—I take issue with...

Sir: I do not know Mr von Hoffman's qualications for the post of reporter on American affairs, but perhaps a word or two to what he unctuously calls 'dear English people' might...

Sir: Mary Kenny's listening habits (5 February) are very dull and I am sure they do not represent those of most full-time housewives. Never having recovered from the loss of...

Sir: There is a recording of a speech by A. Hitler about bringing up the young: He described how they would go into the Hitler Youth, then the Labour Corps, then the SS or SA,...

The bad and the brilliant William Trevor Somerset Maugham and his World Frederic Raphael (Thames and Hudson £3.95) I graduated from detective stories and thrillers to the...

An age of vulgarity

Robert Skidelsky The Age of Uncertainty J. K. Galbraith ( BBC/Andre Deutsch £7.25) One day in 1973, Galbraith was rung up in America by someone from the BBC in L ondon. Would...

Benny Green The Great Boer War Byron Farwell (Allen Lane £7.50) The Boer War was one of those affairs whose military significance was destined by subsequent events to be...

Patrick Cosg rave The Spanish Civil War Hugh Thomas (Hamish Hamilton £12.50 and Penguin £3.50) It is given to few to write a masterpiece, and to even fewer to write more than...

Empty land George Gale Of all extents of landscape, 1 love that of north-west Scotland, that of the highlands and islands and waters below and in between, the most. I know the...

Glasgow's Theatre Royal Rodney Milnes Scottish Opera's greatest single asset must be the acoustically and architecturally ideal Theatre Royal, Glasgow; in which the company is...

Freewheel Ted Whitehead Spokesong (Vaudeville) ) The hero of Spokesong, or the Common Wheel is the bicycle as a symbol of the simple life. The villain isn't quite so...

Memorials John McEwen Terry Frost took up painting during his four years of imprisonment as a POW. Now at the age of sixty-one he has a retrospecti ve exhibition of paintings,...

animals the big thing on the telly these days is adu ltery and divorce. Whole armies of playwrights are working overtime to feed the national appetite for dramas about hus!Dands...