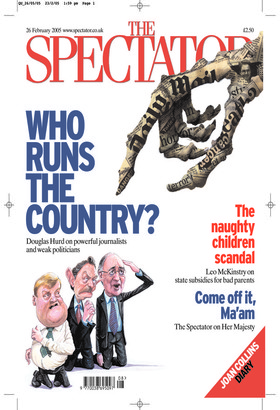 What did Blair advise?

I f you want an answer to the tricky question of whether it is right for the Queen to boycott her son’s wedding, turn to that leading constitutional expert, Max Clifford: ‘Of...

L as Vegas is America’s major playground, and the two days

we spent there recently proved that. It’s a 24–7 town, unbelievably glamorous and exciting if you ignore the massively upholstered ‘middle’ Americans clad in uniform jeans and...

At last the Tories are setting the political agenda, and Blair is running scared

S hortly before Christmas last year I went off to write a book about a malign modern trend, the rise of political lying. Regrettably, during the two months I have been absent,...

I was half-delighted, half-bewildered. Delighted because it was a gigantic show of defiance and the large number of foxes killed proved the absurdity of the ban. Bewildered...

Time to fight back

Douglas Hurd urges politicians to stop giving in to the media, and especially to the culture of brutality, fear and sentimentality epitomised by the Daily Mail I t is 7 a.m. and...

Will Dublin turn on Gerry Adams?

Dean Godson on the widening repercussions of the Sinn Fein/IRA bank robbery Dublin I s Sinn Fein/IRA becoming the Hezbollah of Ireland — a state within a state? Just a matter...

Selling out to China

Andrew Gilligan on Britain’s financial motives for breaking with Washington and lifting the arms embargo on Beijing M ass slaughter, or something like it, is under way in the...

‘Chalk’n’cheese, hole in one, salt’n’pepper, three-in-one oil, sheep’n’goats, eyeless in Gaza, Swan’n’Edgar,’ said my husband, not pausing for breath, so that nature took over,...

Leo McKinstry on the scandal of Attention Deficit Hyperactivity Disorder, whereby parents are paid to bring up their children badly A part from the weather, the food and the...

Save the Oxford tutorial

James Howard-Johnston says that the old system of one-on-one instruction is the best way to hone the minds of both students and dons T here was a time when The Spectator...

Why Putin sells missiles to Syria

With US-Russia tensions at a level not seen since the Cold War, Simon Heffer explains the Kremlin’s relationship with Damascus A t about the time that he was re-elected to the...

From Sheridan Morley Sir: ‘Attention must be paid’ to Arthur Miller (Mark Steyn, ‘Death of a salesman’, 19 February) quite simply because he was the greatest dramatist of our...

Much ado about nothing

From Anthony Famularo Sir: I was relieved to discover that the ‘Goodbye England’ on the cover of your 19 February issue does not, in fact, refer to alQa’eda detonating a...

From Deborah Maccoby Sir: Rod Liddle claims that Labour politicians are deliberately offending Jews in order to curry favour with Muslims (‘Why Labour does not need the Jews’,...

From Patrick Wye Sir: On the day I read Rod Liddle’s splendid article on the folly of writing off Third World debt (‘Make naivety history’, 12 February), the Financial Times...

From Martin B. Vallance Sir: Michael Henderson (‘Time to rescue BBC English’, 12 February) looks to the director-general of the BBC for help. One of Mark Thompson’s first...

From Sophie Dugdale Sir: In case any of your readers are bursting with curiosity to know which greyhound won the final Waterloo Cup (Peter Oborne, ‘The dogs have had their...

Liverpool is an enigma wrapped in a conundrum inside a butty

A nyone interested in how politics affects the wider world, and vice versa, should read in Hansard not Commons exchanges on, say, the economy or foreign affairs, but on...

W hen I was last in the Elysée Palace, with a troop of bankers, we were given a speech of welcome from Jacques Chirac and the opportunity to taste French regional wines. This...

A little Anglo-Irish devil who painted like an archangel

I seldom set foot on the South Bank if I can help it. Once across the River Thames, civilisation ceases and you are in the regions of urban swamps with motorised alligators...

The way of the world

The grass below, above, the vaulted sky

The cutting edge of medicine

A master shrouded by mist

How much of a saint?

Andrew Lambirth on a glorious Caravaggio exhibition at the National Gallery M ichelangelo Merisi (1571–1610), called are temperamentally drawn to the sketchy and incomplete....

(1571–1610), called M ichelangelo Merisi Caravaggio after his place of birth,

has become something of a mythical figure in the half-century or so since his reputation was rescued from obscurity. Today he is celebrated as the great precursor of realism,...

Rise, fall and rise of an artist

Tom Rosenthal Wyndham Lewis Olympia, from 1–6 March I t will be interesting to see if next week’s full-scale Wyndham Lewis (1882–1957) exhibition at Olympia will help, as...

Robin Holloway A t this time of year, your critic is bound to his armchair and can sometimes get no further than to switch on his radio for every Saturday evening’s live...

Toby Young Tynan Arts A Dream Play Cottesloe Ying Tong New Ambassadors T owards the end of his Diaries , Kenneth Tynan complains that the older he gets, the more estranged he...

Michael Vestey W hen I worked at the BBC in Portland Place, a few of my colleagues liked to gravitate to the gloom of basement bars nearby to drink their way lugubriously...

A construct, of course

James Delingpole C an I tell you about my latest adventures? Oh, can I? Can I? OK, well I’ve been making a TV documentary for Channel 4 and, en route, I met the greatest...

Simon Courtauld I f America can be associated with one shellfish more than any other, it must surely be the clam. I know that New England is supposedly the home of the...

Taki Gstaad I ’ve been wondering how people like Tony Blair, Michael Howard and assorted busybodies would react if some concentration-camp guard sued Ken Livingstone for...

Jeremy Clarke A bove a door frame in one of the galleries at the Courtauld Collection hangs a large and hideous African tribal mask that used to belong to the artist Roger Fry....

T he great debate in wine circles these days is over

Robert Parker, the critic whose ratings out of 100 increasingly dominate the world trade. A 91 from Parker can make a wine-grower rich; a 77 might leave him destitute. But there...

Q. My daughter, aged 19, is proposing to take out

a student loan in order to have her teeth whitened. It is not the borrowing of money I object to so much as the fact that her own teeth are not in any way discoloured. Please...

Q. At the age of 39, I have belatedly realised

that all the time I have not spent riding to hounds has been life wasted. I have no money, hunting has just been banned and my wife does not want me to become paraplegic. What...

Q. May I be permitted a small addendum to your

various correspondents’ suggestions as to what to wear at fancy dress parties? I remember back in the early 1960s bumping into Vyvyan Holland, Oscar Wilde’s son, at a fancy...

FRANK KEATING T he opening two weekends of rugby’s Six Nations championship were listlessly lacking in panache or brio. England and France have been generally dire,...