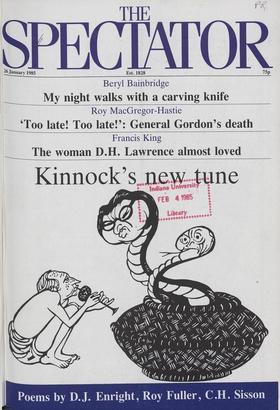 M r Kinnock accused 16 left-wing Labour MPs of 'utter self-indulgence and utter self-indiscipline' after they had disrupted the House of Commons, causing the sitting to be...

Kinnock, the pink 'un J ust back from India, another country which no longer has an Opposition worthy of the name, I find myself looking at British politics with what one would...

On Tuesday, the ownership of the Specta- tor was acquired by John Fairfax Limited of Australia, publishers of the Sydney Morning Herald and the Melbourne Age. Mr Algy Cluff, the...

so much time convincing us that we are lucky to be offered the chance, by 1986-7, to pay over £1,000 million pounds for it, not only encourages a scintilla of doubt to arise in...

M oustapha Saad, whose father was the first casualty of the Lebanese civil war in 1975, was seriously wounded on Monday in an explosion which wounded as many as 50 other people...

A hundred years ago this summer the rigreatest jockey of the age rode the winner of the Derby. Fred Archer's victory on Melton was a joy to punters, who had followed Archer as...

Travellers' tales Auberon Waugh I flew into freezing London on Tuesday .1 from a visit to Burma and God's own Kingdom of Thailand — the temperature in both Rangoon and Bangkok...

S ome time ago, two or three years perhaps, I took up walking in the middle of the night. As a smoker and a `small hours' writer I thought it might give my lungs more of a...

Death of the Opposition

Dhiren Bhagat O 28 December, as reports of counting V came in from the constituencies, a reporter from the Indian Express went to see Charan Singh, the unofficial leader of the...

Roy MacGregor-Hastie Too late! Too late to save him. In vain, in vain they tried. His life was England's glory. His death was England's pride. Moo late! That was the burden of...

The Mandi has endeavoured to stop Sir H. Stewart's march to Shendy, and has failed. Relieved and probably ex- cited by the capture of Omdurman, the great fortified post opposite...

Jo Grimond Bliss was it in that eve to be mididle-class But to be old was very heaven. L ast year was the year of the well-heeled and the geriatrics — those who are both rich...

Winning without Botham Mihir Bose T he night the Calcutta Test ended an Indian journalist, who takes a keen interest in betting, offered odds of 16 to one against England...

Harold Lever riomment on sterling's recent precipi- tous decline continues to focus on superficial factors. The fall in oil prices, and prospects of further falls, are...

The earnings illusion T he sad tale of P & O's

broken en g a g e- ment does not reflect on the marria g e now proposed, which does seem the best thin g for both sides. They have had (in the modern style of en g a g ement)...

of its undisputed star play- er, Geor g e Ma g an of Mor g an Grenfell. Mr Ma g an it is who, with a nimble purchase of Dunlop preference shares (and what share could be Stod g...

Sir: Paul Johnson's chief complaint (The press, 12 January) about the Times is that 'there is not enough humour in the paper . . . . It is true that the Times has Frank Johnson,...

Sir: Patrick Marnham in his review of Henry Porter's book Lies, Damned Lies and some Exclusives casts doubt on a story published in the Daily Telegraph of 7 January about...

Sir: Nicholas Coleridge's comments on Slough (Diary, 19 January) reminded me that in the 1950s that town was a most exciting place for a small boy to travel through. On coach...

Sir: The term 'Lacking Moral Fibre' (Let- ters, 19 January) was attached by the RAF to those aircrew who could no longer face operational flying. I came across it in documents I...

Keeping things together Sir: It is difficult to understand why an eldest son like Auberon Waugh repeatedly grumbles in your columns about primogen- iture. It is entirely due to...

Sir: There were several errors in Mary Kenny's review (Books, 12 January). Jorge O'Neill is the O'Neill of Clanaboy (from Clanaodhbuidhe or the Clan of Flaxen Hugh) and not The...

Said Castro to Kinnock Colin Welch I f I were elected leader of the Labour Party I would be oppressed by an over- whelming sense of inadequacy and unsuita- bility. Is poor Mr...

A neighbour complains the local fox tears open The plastic bags the Council have supplied To help the poor old dustmen by compelling People to take their muck to their front...

Not a dull page

They lack the strength to bury the dead, Even the ones who need so little space. Too weak to shiver, children die of cold. God moves, unmoved, in mysterious ways. These have not...

The tyrant in Tirana

Elizabeth Jennings W hen Michael Schmidt's poetry first came out it cau g ht the attention of poetry readers by the maturity, almost the sophistication of his power over...

Happy the young man who disregards The siren who conceals herself in words, Stopping his ears but seizing on the flesh Which will serve his intelligence the best: What seas must...

Reassessment Peter Phillips The effects of serious musicology have 1 never been greatly appreciated by concert-goers. A piece of music becomes familiar, in that form we come...

Half-cock Alistair Hicks The Second International Contemporary Art Fair (Olympia, 17-20 January) V e're in the wrong game,' one elec- trician said to the other as they raced...

Recycled Christopher Edwards Waste (RSC: The Pit) "'This is a very worthwhile revival from 1 John Barton and the RSC. Who these days knows anything about the writings of...

Purring Alexander Chancellor A t the public inauguration of President Reagan on Monday (there had been a `private' inauguration the day before, watched, like the public one,...

Fur flying Alice Thomas Ellis A friend whom I hadn't seen since the summer popped in the other day sporting a new moustache and I said, `Good heavens, what have you got on...

Unholy writ Jeffrey Bernard L ast Monday the bailiffs called again as I knew they would. They served me with a bankruptcy order for the sum of £564.50 down to a company called...

A walk P. J. Kavanagh T oo many parties, too many funerals the turn of the year fre q uently has too many of both — and I woke up in a ra g e. I am not sure against whom, or a...

Jaspistos reports: Competitors were asked for a li g ht-hearted love poem with the metre and rhyme-scheme of one of the choruses in Swinburne's Atalanta in Calydon. I thou g ht...

No. 1356: Pop Valentine Set by Jaspistos: A Valentine poem please (maximum 16 lines) from one teena g er to another in the appropriate jar g on. Entries to 'Competition No....

Great Alexander Raymond Keene A player who has been storming into prominence of late is the Soviet Grandmaster, Alexander Beliaysky. Last summer he distinguished himself by...