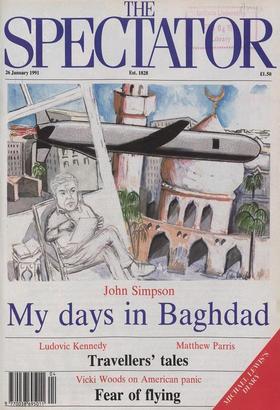 T he Prime Minister, Mr John Major, echoed American warnings that the war against Iraq could not be won quickly. He denounced as contrary to the Geneva Convention the parading...

Mr Major offers us blood, toil, adverbs and small print NOEL MALCOLM I n theory, a great war makes us forget about our own narrow interests: in prac- tice, the opposite...

O n the night the war began I was in the Cape Town airport, waiting for my flight home to London. Our sortie was delayed, so we bivouacked near the gate. One of my three crew...

We should all seek a cure for the Glaspie Syndrome CHARLES MOORE It is an appealing theory. And it may well be true that the doctrines which prevent the study of the works of...

A DIFFERENT KIND OF WAR

John Simpson reports on the unexpected effects of modern weapons on Baghdad and the people he has come to know there By the night of 16 January the main topic of conversation...

AFTER SADDAM, WHAT NEXT?

Edward Mortimer forecasts a resurgence of Islamic fundamentalism when the war is over THE WAR may be just, necessary, and on balance worth fighting. But to anyone who knows...

John Keegan sees difficult times ahead for the allies before Saddam Hussein's defeat AIRMEN fighting a war look for a 'target system' — something valuable to the enemy which...

IT APPEARS that the Duke of Bed- ford, who was supposed to have been killed by the recent burst of cold, shot himself in his bedroom. He had latterly become so pronounced a...

TRYING TO SLEEP IN A GAS MASK

Con Coughlin in Saudi Arabia explains how journalists survive Saddam's Scuds THANKS to Saddam Hussein and his Scud missile batteries, our lives are dictated by the wail of air...

A NEW BREED OF PEACENIK

Stephen Robinson talks to anti-war demonstrators on the streets of the American capital Washington IF A Berkely sociology professor had tried 12 months ago to devise a model of...

Stephen Handelman reports on the futile Soviet repression of small republics Vilnius IT MAY be the saddest sight we have seen so far this year. The Lithuanian parlia- ment, a...

We are nicer to our Iraqi prisoners than we are to our own innocent ones, argues Nigel Burke WHATEVER happens to our prisoners of war in Iraq, the Coldstream guardsmen whom we...

Vicki Woods finds the airports empty as American civilians hide from the war THE HAUTE couture collections taking place in Paris next week will be sparsely attended,...

I REALISED the situation in the Gulf was serious when Dr V started to speak again to Dr F, something which hadn't happened for several years though they share the same wards. In...

The media: Paul Johnson on the nuances of the greatest show on earth WRITING to the Times, as Chairman of the History and Archives Specialist Group of the Royal Television...

I AM in the Hogg camp. I cannot think that boards or shareholders do themselves any good in turning their backs on reality. Facing it may well be, as it was at Courtaulds, the...

ROBIN LEIGH-PEMBERTON, Gov- ernor of the Bank of England, is an amenable chap and an admirable public speaker. So people keep asking him to make speeches and he keeps saying...

THE bankers of Lombard Street complain at the use of 'Lombard' as an acronym. It stands for that familiar City type, the well-heeled chump — Loads of Money But A Right Deadhead....

WHEN Sir Christopher Hogg became chairman of Courtaulds, he took the axe to it. I watched the numbers come over the tape: £100 million write-offs, seven major plants shut, the...

The City's cheery champagne generals are softened up by carpet bombing CHRISTOPHER FILDES T he City is full of champagne-bar generals, and some bizarre ideas have lodged under...

Sir: Congratulations on being the first editor of a national

magazine to publish yoN Hitherto we had witnessed full media coverage of seal culls but self-imposed media censorship of abortion techniques. The human species would appear to...

Sir: Reading about the unpleasant side of chiropody, I'm always

surprised that the Austrian method is not more widely used. On arrival, the client is given a warm soapy footbath and left to soak for ten minutes at least. This not only...

Sir: Amanda Craig's eye-witness report (5 January) of seven abortions at the NHS Samaritan Hospital in Marylebone Road is all the more thought-provoking for its objective...

Sir: Our attention has been drawn to Candida Crewe's 'The sour smell of chir- opody' ( 22/29 December), where we think it is a shame she based her assessment of our profession...

Sir: I was delighted to see in your Christ- mas issue that Hew Kennedy's splendid efforts in constructing a trebuchet have finally been recognised ('When pigs do fly', 22/29...

By any other name

Sir: I have just seen some dozen British Telecom vans clamped by various kerb- sides near your offices. My initial amusement, however, was attenuated by the thought that the...

Sir: Basking in the euphoria of having my autobiography hailed as Book of the Year (Books, 24 November 1990) I eagerly read Mr Vines' criticism (Books, 19 January) in your...

Sir: With reference to your High life column (Party poopers, 12 January), I am amused — indeed, flattered — that Taki should imagine that I should be the repor- ter of his New...

Sir: That earnest young chap, Rupert Christiansen, is, of course, entitled to think I looked a 'wally' in my 'silly wig', when singing Siegmund in the City of Birming- ham...

Sir: The debate over a unified currency for the European Community, one of the major topics at the recent Inter- governmental Conference in Rome, cen- tres primarily on two...

AND EASTERN EUROPE Dominic Lawson writes: Two years ago we appealed to our readers to buy half-price subscriptions to The Specta- tor which we undertook to send to people in...

Rag-dolls in the Amazonas Matthew Parris A t first I thought they were actors in some macabre street theatre. In a variety of strange and awkward poses — some frozen in...

Extremes of wrath Ludovic Kennedy I t is absolutely forbidden to bring plants into Australia,' said a notice at Cairns airport — a nice touch when you recall that was just...

W riting as 1 do in the days of Mr Gorbachev's dangerous and inept crack- down on the Baltic States, it is difficult not to wonder what could have motivated Sir Ralf Dahrendorf,...

High in the night sky Over London, the War God Conjoins the Weeping Sisters, Glowing the same red In Washington and Baghdad, In Sumeria Five millenia ago. Mars, Warrior Lord,...

Fuller's earth is dry as dust

John Whitworth SPANNER AND PEN by Roy Fuller Sinclair-Stevenson, £16.95, pp. 190 I s it a refreshing dryness that begins Roy Fuller's second volume of autobiography with a...

Peter Mullen THE CLOPTON HERCULES by Duncan Sprott Faber, £13.99, pp. 220 W ho now, under the brown fog of a winter dawn, sits in T.S. Eliot's chair at Fabers and publishes a...

Truth is more bitter than fiction

Anthony Blond IS THERE ANYBODY THERE? SAID THE TRAVELLER: MEMOIRS OF A PRIVATE NUISANCE by Simon Raven Muller, £14.99, pp. 198 T his book is neither more nor less...

The Use of Nothingness

En-felloe thirty staves, and there's a wheel: But the worth of the wheel derives from the hole in its hub. Take clay: a lump of muck until it's moulded To the hollow worth of a...

F. W. Walbank ALEXANDER TO ACTIUM: THE HELLENISTIC AGE by Peter Green Thames & Hudson, £35, pp. 970 T he three centuries from Alexander the Great to the defeat of Antony and...

Not always to the swift but to the quick

Opera All together now . . I t would be hard to think of a cosier audience or a cosier atmosphere than that for the Royal Academy of Music's 'Sing- along' at the Barbican last...

Richard Artschwager, Cindy Sherman, Richard Wilson (Saatchi Collection, till July) Faith-killing furniture Giles Auty A first effect of war is to banish complacency. All of a...

Henze's law Robin Holloway T he recovery of German composition from the ruins of the second world war makes a tangled tale. The advanced music proscribed by the Nazis,...

The Mozart experience Deirdre McMahon A s is clear from the programme for this year's festival, the world of mime has many mansions. There are magicians, acrobats and...

Postcards from the Edge (`15', Odeon Leicester Square) The veneer underneath Mark Amory I n less than ten minutes an actress, Suzanne Vale (Meryl Streep), has been ticked off...

A matter of timing Alistair McAlpine L ast Tuesday, Phillips the auctioneers sold, from an extremely glossy catalogue, the contents of a London office building. No ordinary...

Target Hollywood Taki New York Good old Hollywood. I knew that as soon as the shooting started it wouldn't fail to disgust. The first person — and I use the word broadly — to...

Hack tactics Martyn Harris B y Day Three the war was all over, won painlessly for us by clever little bombs that climbed down chimneys. By Day Five we were on the brink of...

Woe is me Zenga Longmore T his week, for me, can only be com- pared with the third act of a Russian play. Life has become so grim that I half-expect to find bearded men in...

,,__SLALA • I RECENTLY received a food parcel from Lady Clarke, who runs something called Natural Life Foods at Treehill Farm near Okehampton. The idea is that she finds local...

O n Sunday 27 January the needle match between Nigel Short and Jon Speel- man commences which will determine the British qualifier for the second leg of the new world...

The biter bit Jaspistos I n Competition No. 1660 you were in- vited to parody any single regular item in Private Eye. This was good foul fun. The two most elusive targets...

Away with cynicism, though not with wit! You are invited to offer a heartfelt Valen- tine (maximum 12 lines). Entries to 'Com- petition No. 1663' by 8 February.

CROSSWORD 993: Review board by Doc

IT WAS a merry old how-d'you-do down in the concrete dungeons under Cardiff Arms Park on Saturday evening after the England rugby team's morose and muscle- bound victory over...