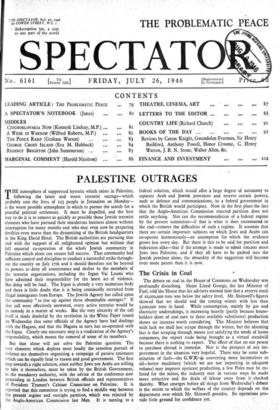 T HE atmosphere of suppressed hysteria which exists in Palestine, following the latest and worst terrorist outrageâwhich probably cost the lives of 123 people in Jerusalem on...

The Crisis, in Coal

The debate on coal in the House of Commons on Wednesday was profoundly disturbing. Major Lloyd George, the last Minister of Fuel, told the House that his advisers warned him...

The National Health Insurance Bill will have passed out of the hands of the House of Commons before this week ends. It is an inevitable consequence of the present legislative...

The majority of bakers and purchasers have by now accepted bread-rationing as a disagreeable necessity. It was to be expected that there should. have been some dislocation in...

It is sufficiently clear that preventive medicine has important international aspects. To say the least, some uniformity of action is desirable if the measures- taken by...

The Law and the Press

It must be a long time since a Law Officer of the Crown talked so much nonsense in public as the Attorney-General, discussing the threadbare question of the Press, has thought...

T H E Peace Conference that meets next week in Paris will differ fundamentally from its historic predecessor of 1919. Then peace was concluded with Germany alone (for the treaty...

The Methodists seem to me to be a little unduly

disturbed because the B.B.C. and the Press gave prominence to an assertion made at the Methodist Conference that " the Methodist Church is slowly dying out ; in ten years we are...

A SPECTATOR'S NOTEBOOK I CAN only draw a very tentative moral

here about the by-elections, for the reason that North Battersea, which may be the best indicator of the three, is only just beginning to poll as this is written. Pontypool...

I am glad that Mr. Ashley Courtenay, who confers benefits

on holiday-making humanity by recommending hotels to it, has got out a 1946 edition of his quite invaluable travellers' guide Let's Halt Awhile. (To save stamps and trouble, let...

If Mr. Bevin can really get rid of passports and

visas he will reap much gratitude, but I doubt whether it is wise to be too precipitate. In a completely unsettled Continent, where many countries are extremely anxioks, for...

A much more expert appreciation of Sir Alan Herbert's admirable

" Big Ben " than I am capable of appears (I believe) in another column. Here I only submit one comment. My enjoyment of the show was great, but it would have been greater if I...

Some appointments, ecclesiastical and otherwise, are commonplace, some are definitely

interesting. The acceptance of a canonry at Westminster and the Rectorship of St. Margaret's by Canon Charles Smyth, of Corpus, Cambridge, is of the latter order, for Canon...

No other member of the House of CommonsâI think this

can be said without exceptionâwould be universally mourned as -Mr. Maxton. To call him that, incidentally, is a mere concession to convention ; no one ever spoke of him as...

By KENNETH LINDSAY, M.P. O NLY a prolonged visit by a highly experienced traveller in Eastern Europe could do justice to the present condition of Czechoslovakiaâkey State as...

A WEEK IN WARSAW

By WILFRED ROBERTS, M.P. , A WEEK in a ruined city is too long to examine the ruins' and A too short to found a claim to be an expert on the political, economic or social...

By GRAHAM WATSON A T a recent Production Conference at Walthamstow, attended by the Minister of Labour, Mr. Isaacs, an ex-Serviceman was reported as having told the meeting...

By EVA M. HUBBACK - HE rip announcement in the House of Commons on July 9th by the Secretary of State for the Colonies that the United Kingdom would make a grant to Malta of...

THE pale mystery of hands, these divided moons Drawing to them the tides of sound, gathering this rising gold sea Of light-glittering strings and the cool blue waves of...

By HAROLD NICOLSON O N Sunday last I completed a five years' term as Governor of the B.B.C. Exactly one week will now elapse between my ceasing to be one of the rulers of the...

AT the Anglo-French Art Centre are pictures by Fred Klein, a Dutchman who has gravitated to Paris. He sees the world through fauve-coloured spectacles, delighting in horses and...

" Big Ben." By A. P. Herbert. Music by Vivian Ellis. At the Adelphi. IN this light opera Sir Alan Herbert follows the fortunes of a young lady who stands, rather arbitrarily,...

HOLY ORDERS AND REWARD SiR,âYour correspondent, " A Churchwarden," draws one picture of our Ministry. Permit me to submit another. As the son of a clergyman, the father of a...

THE FREEDOM OF THE PRESS

Stit,âThe general public defence of the proposal for a Royal Commission on the British Press can wait until the Government has given a decision ; but some of the comments of...

Six,â"Churchwarden's " letter in your issue of July 19th contains

what is a very common fallacy: that a parson's life in the country is less arduous than that of his brother in the town, and therefore he should receive less remuneration. I...

Six,âI do not wish to enter into an argument with

" Churchwarden " on the subject of Church reform. The need is there I have no doubt, but perhaps it may be a matter of opinion as to what shall be reformed and how the reform...

THE DARK SIDE OF THE MOON

Sm,âThe particular virtue of The Dark Side of the . Moon is that it limits itself to telling what the Russians do to people under their control whom they, rightly or wrongly,...

Sut,âThe article by Mr. A. C. M. Spearman, MY., entitled The Cluincellor's Chance, has the merit of stimulating thought: Mr. Spearman apparently assents - whole-heartedly to...

Sm,âI opened my Spectator today with intelligent anticipation that Mr.

Morrison's suggestion of an examination of the Press would find you rather touchy. I was not disappointed. The doctors may be dragooned, rationalised, nationalised and â¢...

would be very true if it were not for the overriding factor that we, in this country, have to buy - our bread and butter from overseas. Consequently, we are dependent on...

Sris,âI should be very grateful if you would allow me to draw public attention to an abuse that has been going on for some time, and has now become what can only be called an...

SIR, âWe certainly areâor have regrettably becomeâa docile people. Some months ago the Postmaster General, by a mere stroke of the pen, doubled the charge for our wireless...

SIR,âWhilst I have a certain amount of sympathy with Mr. H. S. McPherson for his unfortunate listening experience in Australia, I must assume that either he is reflecting the...

A PROGRAMME FOR INDIA

SIR,â Reading Brigadier Brayne's article, A New Rural India, recalled to my mind the numerous A.B.C.A. discussions based on his books and pamphlets about rural uplift which I...

SIR, âOur scale of values- has gone awry when, in present circumstances, a few men can hold up the food of millions in a dispute over what it exalted to a principleâthe...

A midsummer night in our English countryside, when the twilight never quite fades, and the inward lampglow of the flowers dies away only after dawn, is something that eludes...

Sirs,âThe Mercantilists used to teach: " Import only raw materials; export only manufactured goods," and, even with-free trade, the country has managed- to stick fairly -close...

Sts,âBearing in mind the enormous influence of the cinema on the minds of a large part of the public, I am driven to register a very deter- mined protest against this week's...

Sin,âC an you inform the public why writers and editors interject Latin or other foreign language into their writingi, e.g., page 55 of The Spectator of July 19th, 1946,...

In My Garden Now that all the soft fruit is

gathered and bottled, the immediate task is to tidy up round the bushes, cutting down the lush green of weeds ready for digging in with what potash we can muster from bonfire or...

Ste,âAs a pendant to Janus's remarks about Vernon's Pools, I feel I should record the following:âI was released from the R.A.F. in the middle of June. Within less than a...

This is the Familiar Month

I suppose everybody finds that at about the end of July the hedgerow, the field and woodland take on a particular familiarity. The meadow with its sudden crop of ragwort,...

I AM reluctant to go for a walk during these weeks while the tall corn is standing, because the Corgi who always accompanies me takes an idiot's delight in breaking through the...

Snt,âJanus compares Mr. John Strachey's " abolishing the category of children of under one year " with the action of Herod the Tetrarch. It Was not the Tetrarch, Herod...

Niebuhr on our Times AN American theologian visiting England was recently asked whether the influence of Professor Niebuhr was as great as it had been before the war. His reply...

Did Their Mothers Know ?

Tins story of a year with the Women's Land Army is probably as objective in tone as it is possible to be when one is seeking to entertain and writing about oneself. Naive...

Fisherman Naturalist. By Anthony Buxton. (Collins. 10s_ 6d.) ON the evidence of this book, Major Buxton must be accounted a happy and fortunate man. Although his own home is in...

ONE of the few questions upon which there can be no general disagreement in this country is the necessity for friendship and co-operation between ourselves and the United States...

While Following the Plough. By John Stewajt Collis. (Cape. 9s. 6c1.1 THE intellectual's view of agricultural life and labour is usually the romantic view, yet it has taken an...

Income: An Introduction to Economics. By A.C.Pigou. (Macmillan. 5s.) STARTING in Chapter I with the problems of defining and measuring the national income, the writer sets out...

MR. F. L. GREEN is one of the. most exciting of contemporary novelists, and one of the least predictable. Everything he writes is lit up, given a disturbing significance , by...

CAPTAIN HANLEY was well qualified to act as a war correspondent with the irth East African Division in Burma. Service with the Royal Irish Fusiliers had given him a soldier's...

The Organisation of Electricity Supply in Great Britain. By H.

H. Baffin. (Electrical Press, Limited. 21s.) DR. BALLIN has written an important and a timely book. His approach to the problems of the organisation of the electricity supply...

Chaim Weizmann. Tribute in honour of his Seventieth Birthday Edited by Paul Goodman. (Gollancz. 10s. 6d.) CHAim WEIZMANN'S career has some of the elements of an Oriental...

SOLUTION TO CROSSWORD No. 383 SOLUTION ON AUGUST 9th

for one g uinea will be awarded to the sender of the first correct lution of this week's crossword to be opened after noon on Tuesday week, Au g ust 6th. Envelopes must be...

By CUSTOS HOLIDAY influences, reinforced by some uneasiness about inter- national exchange rates and Mr.\ Dalton's intentions in the matter of company profits taxation, are now...