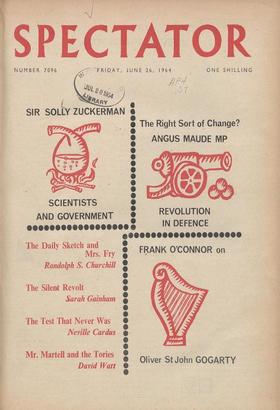 A DISARMING number of people and journals are now on record as admitting that they 'don't know' about South Africa, and the Spectator reluctantly joins them. That one detests...

QGINTIN HOGG'S WEEK ignoring his own exhorta- tion to politicians

to avoid mud-slinging, the Minister of Science denounced Mr. Wilson as a `Goldwater in reverse' and likened him to a 'three- card trickster.' The Commons Privileges Corn-...

R. A. CLINE writes: Another report about the reform of our criminal lavi system : this time from the all-party committee of lawyers known as Justice. At the time of the Lucky...

WILLIAM DEAN writes : Those who jumped to the conclusion that Marshal Tito's recent talks with Mr. Khrushchev in Leningrad and his hastily arranged meeting with Mr....

Fr HERE never was any chance that the Commit- ' tee of Privileges would make an ass of itself over the absurd Hogg privilege case. It does not matter very much what Mr. Hogg...

Mr. Martell and the Tories By DAVID WATT rro connoisseurs who like their politics subtle I and piquant I recommend, as a welcome change from the rather coarse fare currently in...

HARRY FRANKLIN writes from Lusaka: AMBIA is the great Black and White Hope Z of Africa. It all seems rather too good to be true, but there seems no reason why this hope should...

The Silent Revolt From SARAH GAINHAM T WENTY-FIVE per cent of planned production in Poland, said a foreign observer here, is lost through absenteeism and alcohol. This state-...

By CHRISTOPHER HOLLIS Mr. R. 1. Knight, Headmaster of Oundle, 'told parents at the annual speech day that he found it hard to divorce the idea of independence from that of...

From MURRAY KEMPTON WASH INGTON T HE Senate passed the Civil Rights Bill by 73-27, a majority, which, had it not been for lust one dissent, could have signalled the national...

By SIR SOLLY ZUCKERMAN (Chief Scientific Adviser, Ministry of Defence) Clcientists and National Policy Making* has to ki do with American policy and with American scientists....

The Right Sort of Change?-3

REVOLUTION IN DEFENCE By ANGUS MAUDE, MP S 0 great have the changes in the defence situation been that the present is a suitable time for looking ahead and asking some...

Dr. MacQueen Outside the field of his work in medical

health very few people a short time ago would have heard of Dr. MacQueen. Now everyone knows his name. In a month or two probably it will be forgotten. Before that happens I for...

This Week did a splendid piece on a modern attitude to the Welfare State, based on Enoch Powell's article in the Spectator. In my prejudiced view, Powell ran rings round...

A story of a lost scoop is attached to this. Shortly after her marriage a reporter was inter- viewing her. 'Tell me,' he said, 'what did you do before your marriage to Commander...

Mr. Frank Gillard writes to the Spectator to declare 'There is no plan for any fundamental change in the character of the Light Pro- gramme.. . . But its broadcasting day, now...

Occasionally one reads a strangely insensitive comment in the British press on the subject of modern totalitarianism. Such was last Sunday's editorial comment in the Observer on...

Capital Punishment Let me make it clear that I do

not believe that capital punishment is a deterrent, and that I would be glad to see it go. Yet I want to question the universal assumption that, which- ever party wins the...

The Daily Sketch and Mrs. Fry By RANDOLPH S. CHURCHILL -rim Daily Sketch is a well-edited and attrac- t tive newspaper.' Lord Rothermere advertises in the Financial Times that...

By HENRY FAIRLIE es not for me to suggest why, but it is a long time since we heard anything of Dr. Brain- drain. He was obviously a man of even slighter mettle than I thought...

lh ows Letters manifesto with the performance of the Postmaster - General

in dealing with radio problems at the moment. The Home Secretary, on behalf of the British Government, undertook that the Isle of Man could have its own commercial medium-wave...

SOUTH AFRICA AND SANCTIONS SIR,—Quoodle asks: What now for South

Africa? Surely—confronted with the appalling logic of the South African Government's policies, and remember- ing Britain's other experience of a 'yolk' leadership obsessed by a...

SIR,—Your leading article on broadcasting could well be adopted as

Conservative Party policy at the elec- tion. Eighty-five per cent of the listeners in the 'pirate' areas choose commercial _radio rather than the BBC services, and 100 per cent...

SIR,—The Spectator invents a policy for the Light Programme, attributes it to the BBC, and proceeds to deride it. Here are the facts. There is no plan for any fundamental...

dubs it the 'City of dreadful Knights' and with an almost Brutus cut brands it as a set of amateurs, materialists and philistines. In the face of such unkindness Cardiff cannot...

Sot.--Like Strix and Randolph Churchill I too Must admit to

having been blackballed from The Times birthday list this year. Mind you, I can't guarantee that I have ever been whiteballed. I have never, before this year, looked in The...

A TASK FOR YOUTH SIR,—In his letter which you printed

in your issue of June 12, Mr. Anthony D. Steen makes out a good case for a very worthy cause, namely, the relief of loneliness and domestic help to a very large number of...

SIR, —My attention has been drawn to the comment in last week's 'Notebook' on the late Sir Henry Spencer. No doubt you find it disturbing that one of the most dynamic men in the...

Sta,—During the Occupation of Germany, with a view to preventing the re-emergence of anything like the political 'people's courts' of Nazi days, special courts were prohibited;...

The Test That Never Was

By NEVILLE CARDUS A FEW summers ago, Groucho Marx was taken . to Lord's, during the course of a dull immobile county match. Through the windows of the Long Room he looked on,...

SIR,--Please allow me to correct the misleading impression likely to be given by your review of Christopher Brooke's Europe in the Central Middle Ages. This states that it...

SIR,—David Pryce-Jones has got me wrong. I said that the

National Theatre was like a lending library, not that it actually was one. • In other words, it performs the same kind of service to the drama that a library does to literature;...

St. Paul's at Hammersmith, now preparing to establish itself at its. third London location in Barnes, takes the palm for adaptability. The school, founded by John Colet in 1509,...

SIR,—Material is being assembled for a biographical memoir of the late Mary Somerville (1897-1963), first Head of School Broadcasting and a Controller of Talks Division, BBC....

The Birthday - Party. (Ald- D 03 wych.)—St. Joan of the Stockyards. (Queen's.) In a bare room Pryce and Jones are typing alter- nately. Pinter's voice from beyond. P: Is that...

By CHRISTOPHER BOOKER IN the claustrophobic corridors of Television Centre ( that buildin g , in fact, is more than half the trouble ) , is the paranoid pall be g innin g to...

The Buck By FRANK O'CONNOR M Y recollection of Oliver Gogarty is of a man who looked rather like a cat—a cat that smiled and smiled and was a villain. One of his friends said...

On Their Shoulders : British Generalship in the . • Lean Years 1939-1942. By Brigadier C. N. Barclay. (Faber, 30s.) PERHAPS the most controversial statement in Brigadier...

Road to Volgograd. By Alan Sillitoe. (W. H. Allen, 18s.) ALAN SILLITOE is a fine and original novelist, but his latest work falls into the well-trodden rut of 'books on Russia'...

THE work of Samuel Beckett is a vast archi- tecture of exploration, each part standing on the achievement of its antecedents, each part starting from the closing premise of its...

Why are you walking so, Waltzing a yard in the air? When did you learn this new trick Dancing from flower to flower Like a humming-bird Drunk ai a lord in the sun, Deaf to all...

The Jet Set. By Burton Wohl. (Barker, 18s.) A LIVELY bunch of novels for those who want straight easy narrative, less so for those demand- ing somewhat more. Graham Greene can...

By T. W. HUTCHISON M R. MCMAHON' believes that Britain's economic performance, particularly as regards the balance of payments, 'will be a good deal healthier' in the later...

By CUSTOS . O NCE again a recovery in the equity share markets has petered out. Three times the market has tried to go through its previous high --once in January, again in...

The Miracle at Geneva By NICHOLAS DAVENPORT IT was a miracle that some- thing tangible emerged from the three months of debate at Geneva on trade and development among the...

By LOTHBURY I N last week's issue there appeared a brief sum- mary of the chairman's report of F. Francis and Sons (Holdings). The company's interests are spread over the...

on Suburbia By BRENDA ROWE No. 25 Flora Grove was the address; but it could have been Douglas Avenue or Cedars Drive or Oakwood •Crescent. Flora Grove was like any other...

By ALAN BRIEN In theory, I have always been a great walker. When I lived on the flank of Primrose Hill, my daily programme called for me to leave by the garden gate,...