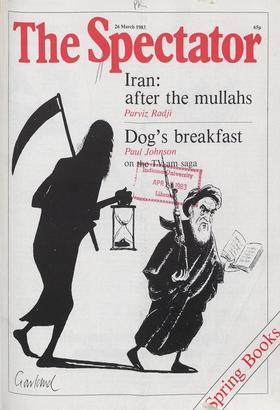 The myth of moderation

M rs Thatcher has met Dr Garret Fitz- Gerald on the neutral ground of Brussels, and has had with him what she prefers to regard as a chat, but what the Irish have more boldly...

Curing the disease Colin Welch E ven in the best conducted establishments like the Spectator there are poltergeists which play occasional tricks with what was written, making...

C Cheltenham is a good place to spend St N— , Patrick's Day. In racecourse bars and hospitable tents convivial friendship rules Anglo-Irish relations. It is a long way from the...

Richard West E vents in Zimbabwe this month were curiously familiar. But why? Where and when had I come across such a com- bination of circumstances? Two political leaders,...

Who's afraid of Aer Lingus?

Bohdan Nahaylo T hirty-six years after the last of two and a quarter million East Europeans were handed over to the communists by the Western Allies, Stancu Papusoiu has bec...

Alexander Chancellor Hebron And Abraham removed his tent, and came and dwelt in the plain of Mamre, which is in Hebron, and built there an altar unto the Lord.' (Genesis...

Iran: after the mullahs

Parviz Radji D espite the predictions of many, includ- ing myself, that the clerical rulers of Teheran would not long endure in office, the mullahs celebrated last month the...

Andrew Brown Stockholm E gon Bahr, the West German Social Democrat, used to be famous for tell- ing a journalist that he would rather see a united Germany than a united Western...

Ian Waller T he dismemberment of British Transport Hotels in the cause of privatisation — at what seems poor value for the taxpayer — has almost severed a century-long link...

Mr A. M. Sullivan, writing to the American papers, delivers a very sensible homily on the impolicy as well as the wickedness of the so-called 'dynamite' outrages. He insists on...

Alan Rusbridger J ohn Clotworthy Talbot Foster Whyte- Melville Skeffington, the 13th Viscount Massereene and Ferrard, was not quite himself on Thursday 3 March, as you might...

Boris Ford r ren years ago, the University of Sussex decided to give the late Sir William Walton an honorary degree as a 70th birth- day present, and I was asked to deliver...

Dog's breakfast Paul Johnson F leet Street has got more pleasure out of the crisis at TV-am than any other event in months, partly because it dislikes TV per- sonalities as...

Sir: Please inform Mr Simon Courtauld (Notebook 19 March), that some papers and the BBC refer to the Union Flag because that is its name. The term Union Jack is only correctly...

Sir: I have just read the article 'Island in the rain' by James Hughes-Onslow (1 January). It is inconceivable that our South-West, in its totally wilderness state, could...

Budget bonus Sir: Why is it that press coverage of impor- tant events is distorted so often by the pessimistic editorial desire to report only bad news, so that items of...

Sir: Why, when it has men like Ingrams, Booker, and the Callas-loving' Jeffrey Ber- nard available to it, does the Spectator per- sist in inviting improbable people to write...

Sir: Paul Johnson should really come out in the open and give us all a coherent sum- mary of his views instead of favouring us with choleric outbursts on isolated minor issues...

Portraits of the poets Helen Gardner The Image of the Poet: British Poets and their Portraits David Piper (Clarendon Press, Oxford £17.50) W hether speaking on a single great...

Arthur Marshall The Oxford Book of Aphorisms Chosen by John Gross (0.U.P. £9.50) O ne does rather wonder to what extent the creators, or composers, or coiners e , r aphorisms...

Francis King Look at Me Anita Brookner (Cape £7.50) T have no idea of Anita Brookner's 1 age and the photograph on the cover of her book, making her look uncannily like Lucille...

Marghanita Laski An Innocent Millionaire Stephen Vizinczey (Hamish Hamilton £8.95) Tt is usual, now, to deplore the "effects of serialisation on the Victorian novel, but one...

Peter Quennell Some People Harold Nicolson With an introduction by Nigel Nicolson (Constable £5.95) I his appears to be a season of reissues. A few weeks ago we had a...

John Stewart Collis T often used to wonder how Tolstoy would have fared in the USSR. (He always hankered after a prison sentence under the Tsar). Or, for that matter — What...

The paperback price of the Oxford Past Masters is £1.75

James Hughes-Onslow Dialogue with Death Arthur Koestler (Papermac £3.95) Written in 1937 shortly after he was released from a prison cell in Andalusia where he had been under...

Tortured Giles Gordon Lent „ I suspect the play, about the anguish growing up, is far funnier than Christopher Fettes's production allows. It's a stirring evening, though....

Ill-treated Brian Sewell FT he doors of the Royal Academy are to be open on Good Friday so that the public may bow the knee, not to a great icon redolent of the sorrows and...

Side by side Maureen Owen T have long maintained that the happiest 1 and most well-balanced type of woman is the genuine spinster. Having grown uP with a host of unmarried...

Black and white Peter Ackroyd Veronika Voss ('15', selected cinemas) Fa sbinder's new film is so melodramatic that even the credit-titles have shadows. They bring back...

Memory Lane Taki I n May 1965 I was living in Paris, a newly' wed. My wife lived at home, on avenu e Raymond Poincare, with her mother, he r , dog, and her nanny, and I lived...

Unlovable Richard Ingrams rrhere has been a good deal of unseemly gloating about the crisis at TV-AM and the resignation of Peter Jay. One can only assume that it is...

L'Inspecteur calls P.J. Kavanagh V ears a g o, before the Common Market referendum, I was on a radio discus- sion pro g ramme when the chairman sud- denly announced that...

Big guns Jeffrey Bernard I n th e past, I've always resolved to while awaY those endless hours of boredom while held prisoner in a hospital bed by r eading those books I've...

Jaspistos reports: Competitors were asked for a plausible piece of prose containing the words, but not necessarily the punctuation, of at least 10 clues in the Crossword in our...

No. 1262: Raising the wind Set by Charles Seaton: A letter to a friend, please, asking for a loan, as it might have been written by Henry James, Stern, Joyce, Chesterton or...

Overkill Raymond Keene Stnyslov be g an this week in Velden; ,Portisch- Korchnoi commences 25 March in idad Kissin g en, while Ribli-Torre is in Alicant e from 3 April....

A prize of ten pounds will be awarded for the first correct solution opened on 11 April. Entries to: Crossword 600, The Spectator 56 Doughty Street, London WC1N 2LL. --- 11...

Black White White to play and mate in 2 moves against any Black defence. This problem is the first stage in the fifth of the Lloyds Bank British Chess Problem Solving...

A eerie silence settled over the House of Commons in the case of Mr Stancu Papusoiu, a young Romanian who smuggl- ed himself into Britain, requested political asylum and was...