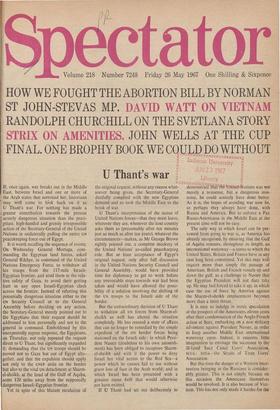 If, once again, war breaks out in the Middle East, between Israel and one or more of the Arab states that surround her, historians may well come to lOok back on it as U Thant's...

That the present body of law relating to abortion is unsatisfactory is a proposition that commands almost universal assent. Doc- tors, the public (on the evidence of opinion...

Once more unto the brink: the Arab-Israel quarrel blazed up again, with President Nasser ordering the United Nations force to go home, and then block- ading Israeli shipping in...

Doves of a kind

AMERICA DAVID WATT Washington—'Come in any time,' said a senior State Department official the other day; 'I have nothing to do, now we've handed everything over to the...

CHRISTOPHER HOLLIS Though . Shakespeare says 'Security Is mortal's chiefest enemy,' And patriot tongues are bound to guard The Earl at least, if not the Bard, Yet I reveal it...

From the 'Spectator,' 25 May 186r---The Queen on Monday laid the first stone of the Hall of Arts and Sciences, a splendid amphitheatre to be erected in South Kensingston, north...

Why not country membership?

COMMON MARKET JOCK BRUCE-GARDYNE, MP The official British reaction to General de Gaulle's press conference had just that quality of robustness which connoisseurs have come to...

MIDDLE EAST CRISIS MALCOLM RUTHERFORD Only two weeks ago the Egyptian air force was bombing Saudi Arabia. The stage seemed set for a major showdown between the 'revolu-...

God save the Queen

RHODESIA JANET HUCK Salisbury—The Queen's birthday will be cele- brated here on 10 June, despite the fact that reference to the Queen was deleted from the principles of the...

RUSSIA TI B()R SZAMUELY The huge office block which forms one side of Dzerzhinsky (formerly Lubyanskaya) Square in Moscow is known to all simply as the Lubyanka. For forty-nine...

J. W. M. THOMPSON In view of the excitement created when Mr Heath dared to drag the subject of the Bomb and defence generally into the Common Mar- ket debate, it could have...

How we fought the Abortion Bill

PARLIAMENT NORMAN ST JOHN-STEVAS, MP On 22 July 1966 the Medical Termination of Pregnancy Bill passed its second reading in the House of Commons with a massive vote of 223...

THE PRESS RANDOLPH S. CHURCHILL With advertising drying up as a result of Mr Wilson's squeeze, life is becoming grim in Fleet Street. Despite falling revenues, an expensive...

LONDON PATRICK HU'fBER It is only eleven weeks since I was able to reveal, in the columns of the SPECTATOR, the full story of the Barnsbury scandal— how the report of an expert...

MEDICINE JOHN ROWAN WILSON Quite a stir has been caused by the publication of a book by Dr Maurice Pappworth (Human Guinea Pigs, Routledge and Kegan Paul, 32s) which makes...

Yurts, tukhuls and other amenities

PERSONAL COLUMN STRIX For the small covey of small children, who pass her twice a day on their way to and from the school bus, the old grey mare has what bureau- crats describe...

HAGIWARA SAKUTARO Translated from the Japanese by Graeme Wilson From pain of long disease The face is spider-webbed. Below the waist the ebbed Flesh has contracted to Thin...

One awful example we could do without BOOKS

MARTIN SEYMOUR-SMITH One naturally assumes that a book of approxi- mately 60,000 words which sets out to demon- strate the dispensability of, among other things, Beowulf, The...

HILARY SPURLING On 1 December 1804 Master Betty's debut in a forgotten tragedy at Covent Garden eclipsed Napoleon's coronation next day, and most of Napoleon's doings for the...

The Campaigns of Napoleon David Chandler (Weidenfeld and Nicolson 6

gns) The artilleryman CHRISTOPHER HIBBERT The Campaigns of Napoleon David Chandler (Weidenfeld and Nicolson 6 gns) One day at St Helena, while fashioning his legend for the...

HILARY SPURLING John Hanson, whose company is giving The Desert Song at the Palace, has taken more than a million pounds at provincial box-offices with this and similar...

BALLET CLEMENT CRISP In matters of ballet the faults of the Dutch are non-existent, if this week's visit by the Neder- lands Dans Theater to Sadler's Wells is any- thing to go...

JOHN BULL The Government's suspicion that excessive charges have been a major factor, together with interest rate trends, in pushing up clear- ing bank profits and dividends...

Beasts of the tax burden MONEY

NICHOLAS DAVENPORT A discussion of taxation is like rehearsing your last operation—it is bound to bore your friends to death. But, unlike your last opera- tion, taxation cannot...

CUSTOS The Government broker finally won the day in the gilt-edged market, having more than ab- sorbed the sales. In spite of the most menacing foreign news, government stocks,...

Sir: Professor Trevor-Roper may be right in believ- ing that

Matthew Arnold dearly wanted the laureateship in 1892, but the belief might be a little difficult to substantiate, as Matthew Arnold died in 1888. But there was not such a...

Sir: I read Leslie Adrian's article on 'Record breaking' with interest in last week's SPECTATOR. Many conscientious 'record dealers—and there are quite a large number in spite...

Sir: Although it is true that the final version of the Medical Termination of Pregnancy Bill now omits the four separate clauses specifying the grounds for legal abortion, Mrs...

Reflections of an addict Sir: Dr Plumb has entertainingly sketched

the pro- gress of such drugs as tea from notoriety to the height of respectability (19 May). He might have gone on to note that ermine was bestowed on four or five pedlars of...

Sir: May I put in a plea for common sense?

What in fact happens when women are compelled to have babies they do not want (even if perhaps they ought to want them)? The Evening Standard answered that very vividly...

Sir: One can respect the principles of those humanitarians who

support the Abortion Bill, yet at the same time doubt whether they have fully realised the grim principle—and precedent—repre- sented by Clause 1(l)(b). This clause permits...

Who gets the laurel?

Sir: Mr Smythe, who seems to think that I am joking, accuses me of getting my facts wrong (Letters, 19 May). I am serious and I think that my facts are right The Statute of...

Europe and the bomb Sir: Is the argument for a

new European power block, inevitably nuclear, really that it would make for a 'genuine peace,' as suggested in the SPEC- TATOR (12 May)? The peace we have is surely as genuine...

Sir: As J. W. M. Thompson says (19 May), if L'abour supporters are going to jump on the Liberal bandwagon in Orpington, or other voters on other bandwagons elsewhere, it is...

Expo 67 and all that

Sir: I have read much on our world exhibition Expo 67 and Mr Strong in his article 'Expo 67 and all that' (12 May) seems to be the only writer, so far anyway, to be displeased...

Sir: I have only just seen John Wells's article in your issue of 12 May. As a journalist, I know too well how desperate one can become for some- thing to write about, but I am...

Sir: Accurate knowledge of elementary French is fairly widespread among educated people in this country, including your readers. I suggest, there- fore, that Leslie Adrian, if...

Sir: The pseudo-news headlines on arts notices in the Daily Telegraph and The Times have long been one of the dottier (if harmless) aberrations of Fleet Street ('The Press,' 19...

Sir: As part of the study of English local traditions and customs, members of the Institute of Dialect and Folklife Studies of the University of Leeds, and the Survey of English...

Playbore of the western world

Sir: My toes are still curling Over Hilary Spurting And Chekhov has turned in his grave. Poor Hilary blabbed That Miss Elgar was crabbed In a staging so utterly brave. But...

JOHN WELLS As I was three when the last European war broke out .and - nine when it ended, I still have a rather romantic notion of what was then referred to as Peacetime. In...