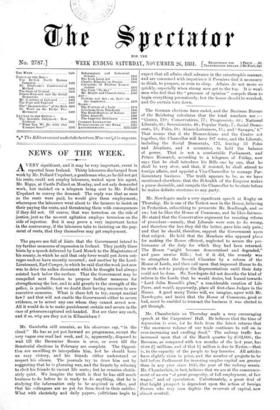 The papers are full of hints that the Government intend

to try further measures of repression in Ireland. They justify these hints by a speech delivered by Lord Monck to the Magistrates of his county, in which he said that only force...

The German elections have ended, and the Business Bureau of

Mr. Gambetta still remains, as his observers say, "in the

cloud." He has as yet put forward no programme, except the very vague one read last week, and is, apparently, disposed to wait till the December Recess is over, or even till the...

NEWS OF THE WEEK A VERY significant, and it may be very important, event is reported from Ireland. Thirty labourers discharged from work by Mr. Pollard Urquhart, a gentleman...

Mr. Newdegate made a very significant speech at Rugby on

Thursday. He is one of the Toriest men in the House, believing in Protection, subscribing to prosecute Mr. Bradlaugh, and so on ; but he likes the House of Commons, and he likes...

Mr. Chamberlain on Thursday made a very encouraging speech at

the Carpenters' Hall. He believes that the time of depression is over, for he finds from the latest returns that "the enormous volume of our trade continues to roll on in...

*** The Editors cannot undertake to ret urn Manuscript in

Sir Thomas Acland, on Tuesday, made a long speech to

the Broadclyst Agricultural Association upon agricultural affairs, which, coming from so typical a man, has much political inter- est. Sir Thomas is evidently willing to...

The Stafford election went in favour of the Conservatives by

Mr. Justice Denman delivered judgment on Wednesday in some cases

which seem likely to make an immense addition to the number of " householders " who possess the household franchise. The question was as to the qualification of persons...

Mr. Dillwyn delivered an address to his constituents at Swansea

last week,—received, as usual, with a unanimous vote of confidence,—in which he put the true character of the Brad- laugh question very clearly and sharply. The law, he said,...

At Stockport, on Monday, in addressing a Conservative Club, Sir

Richard Cross entered on the delicate subject of Fair-trade, and very wisely repudiated all taxation of the food of the people, whether bread or meat ; indeed, he truly reminded...

We have always maintained that if the criminal indictment& for

libel were made more difficult, Juries would do more severe justice in the civil action, and a case heard this week confirm& this view. Mr. Clement Scott, proprietor of a...

Sir Richard Cross has been on the stump in Lancashire—

St. Paul's Industrial &hoot on the ground that he has

no power to compel evidence on oath, and that more unsworn evidence would be useless. He has, therefore, remitted the whole matter to the Public Prosecutor, who " will decide...

Sir Theodore Martin delivered his rectorial address to the students

of St. Andrew's last Monday, an address beautiful in its English, and full of just remarks on the educating influence of classical study. To which school in politics Sir...

Mr. Lowther delivered at Middlesbrough, on Thursday, a speech on

Irish affairs, which shows that he at least. has no plan to recommend for the government of the country which he once attempted to rule, and the people of which, he says, with...

The papers are discussing a singular rumour, which deserves some

attention. The Chilian Government is pushing the "rights of war" very far in Peru. Unable to find a Govern- ment which will grant its terms, it is occupying Lima and Callao,...

Professor Sylvanns Thompson delivered a lecture before the Society of

Arts on Wednesday, in which he indicated the advantage that might ultimately be gained from the storage of electricity. All that is needed for its use in most departments of...

The failure of the recent prosecution against Professor Ferrier, for

the alleged breach of the Vivisection Act, is intelli- gible enough, now that it appears that it was Professor Yeo who performed the brain mutilations attributed by both the...

THE BRITISH NORTH BORNEO COMPANY. T HE matter will, of course, be explained in Parliament ; but pending the discussion, we do not quite understand the motives which have...

A S a Controversialist, whether with tongue or pen, Mr. Gladstone has in some respects no superior. and hardly an equal, among his contemporaries. Certainly no man of our...

THE STATE OF IRELAND.

T HE state of Ireland excites as much alarm among Liberals as it does among Tories,—perhaps, indeed, rather more, for while the Tories feel a certain distinct elation, as Lord...

PRINCE BISMARCK AND THE SOCIAL DEMOCRATS.

NOTHING of importance can, we imagine, be done in Germany for the next few weeks. The Chancellor has, we believe, secured at least the partial adhesion of the Ultramontanes,...

T N Mr. Courtney's thoughtful address to the Liberal Work- ing Men's Association at Liskeard, he brought out with a touch of originality the distinctive defects of the richer...

THE POPE AND ENGLAND.

T HE appointment of a Minister to the Vatican is not, as a party question, a matter of the first importance. For good or for evil, the new Electoral body is much more careless...

THE "ECCENTRICITIES" OF THE RICH. T HE account of Welbeck published

in the Times of Tuesday bears curious evidence to the strength of one English popular impression. So deep is the belief in this country in the sensibleness and, as it were, the...

DR. WARD ON THE DIVINE PRE-MOVEMENT.

W E have always recognised in Dr. Ward—the author of " The Ideal of a Christian Church," which more than a generation ago made such a stir at Oxford, and till very recently the...

THE RIDSDALE JUDGMENT: NEW EVIDENCE. [TO THE EDITOR OF THE " SFEcTAToB.'1 Sta,—I am not quite sure whether I may count on your candour and liberality for admitting another...

[We have received the following interesting letter from a source

for the perfect trustworthiness of which we can answer, mid think the warning contained in it of so much importance, that we gladly give it to our readers.—En. Spectator.] "...

[To THE EDITOR OF THE " SPECTATOR. " ] SIR, I hope that the attention which the cases of the Glasgow Girls' Reformatory School and the St. Paul's Industrial School have called...

[TO THE EDITOR OF THE " SPECTATOR."] Sia,—No one can be less desirous than I am of depreciating the value of Mr. Bright's services in bringing about a settlement of the...

[TO THE EDITOR OF THE "SPECTATOR. "] Six,—It happens accidentally that I have only just seen your number of November 12th, in which a correspondent sends you a copy of a letter...

[To THE EDITOR OF THE " SPECTATOR."] SIR,—In the Spectator of the 12th inst. I read the following :— 4 ‘ Owing to circumstances in the history of Irish agriculture, and...

SIE,—Your reviewer and Mr. Bram Stoker could, I am sure, tell me heaps of things that I do not know, and I suppose we all learn something new every week of our lives. But may I...

"CURIOSITIES 0 F PURITAN NOMENCLATURE." [To THE EDITOR OF THE

" SPECTATOR."] SLR, —In the registers of the parish of Heanor, Derbyshire, is the entry of the baptism of twin children," Jeru " and " Salem," dated about one hundred years ago....

FASHION AND ART; OR, SPOTS ON THE SUNFLOWER. THERE are some signs of a coming change in the Art world, or rather in that small section of the London Art world which may be...

THE PORTRAIT OF A LADY.* IF Mr. Henry James had called this book "The Portrait of Two Gentlemen," we might have admitted the aptness of the descrip- tion, for the real power of...

IT would be fascinating work, if it were possible, to follow the fortunes of this volume,—a selection from the writings of Mr. Thackeray, made by a skilled and friendly hand;...

THE HEAD-HUNTERS OF BORNEO.* IT is to be regretted that

the distinguished Dutch traveller and naturalist to whom we owe one of the most interesting works in the now widely-extended literature of travel should have dis- figured its...

WE observe that in the advertisements of this little tale, it is called Chloe Arguello ; or, Caricatures of the Humbugs, and we suppose that the element of caricature was...

THE IMPERIAL DICTIONARY . 1 ' THERE are many reasons why this

remarkable book should receive at a reviewer's hands a very different fate from that which usually befalls new editions. For one thing, a new edition ' , which takes ten years...

CHRISTMAS BOOKS. Picturesque Palestine, Sinai and Egypt. Edited by Colonel Wilson, R.E. Vol. I. (Virtue and Co.)—It should be sufficient to say that this very handsome volume...

The Cambridge Examiner. A monthly publication (excepting the months of

Cassell's Book of Sports and Pastimes. (Cassell, Petter, Galpin, and

Co.)—In preparing this capital book for boys, the compiler has given the words " sport " and " pastime " their widest signification- It treats of every outdoor game, from...