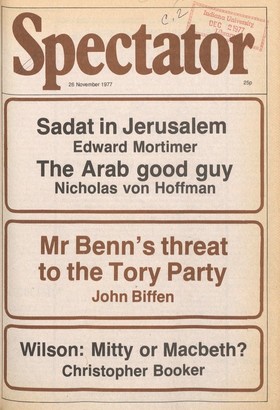 Mirror, Mirror, up the wall

Journalists are more adept than most at accusing others of hypocrisy. Commentators and leader-writers have not hesitated to criticise employers and unions for reaching wage...

The uncaring English Ferdinand Mount The significance of the government's unexpected defeat on Clause One of the Scotland Bill must not be underestimated. The long-term...

Last Sunday, while waiting to watch the historic television broadcast from Jerusalem, I started to read George Ward's account of the Grunwick confrontation in the Sunday...

Lady Pembroke's baby Auberon Waugh Everybody of good will in Britain will have rejoiced to learn last week, through the good offices of Mr Nigel Dempster, that the Countess of...

Edward Mortimer Jerusalem Many people in Israel, in Egypt and elsewhere will be grateful to President Sadat for his astonishing unilateral gesture in going to Israel. But if...

Nicholas von Hoffman Washington Official Washington did not like it when it really got through that Anwar Sadat was using CBS's Walter Cronkite to talk to Menachem Begin. As...

Richard West Pietermaritzburg In the last, unfinished Wodehouse novel (Sunset at Blandings, Chatto and Windus, £3.95) Sir Galahad Threepwood excuses himself from a game of...

David McNicoll Sydney 'Oh God, not again!' This was the universal reaction when Prime Minister Malcolm Fraser announced a new election for 10 December. The Liberal, Labour and...

Charles Foley Santa Monica One of the more curious turns in the American political circus is the Tom and Jane Show. It stars those famous Vietnam veterans Tom Hayden and Jane...

Christopher Booker After ploughing through Andy Roth's somewhat laborious demi-biography*, I fear we all have to face up to the undeniable tact that Harold Wilson, Knight of...

John Biffen British politics have become increasingly unpredictable over the past generation. It now seems scarcely conceivable that the post-war Attlee administration did not...

Peter Paterson 'Toot your horn if you support us,' reads the sign chalked on a board outside our local fire station, and I duly salute the huddled pickets standing waif-like in...

Patrick Cosg rave Mr Jonathan Guinness, readers may recall, once rejoiced in the political nickname, 'razor blades'. This was not because he had ever betrayed any marked...

Angela Huth 'Know thyself? If I knew myself, I'd run away,' said Goethe. So should I; and it was not to get to know myself that I went to Norfolk last week, though there were...

Winners all Taki It was election time last week. The birthplace of democracy held a general election, the International Bachelors Society elected the ten most exciting women...

Buy gilts! Nicholas Davenport The City decided — rightly I think — that markets had been playing things a little too coolly. Equity shares have given up their gains and the...

Sir: 'I cannot quite understand why the strong distaste remains' is the most significant remark of Patrick O'Donovan in his article Memories of Begin (19 November), for that...

Sir: Peter Bauer (12 November) is surely right in his contention that the main differences between English and continental patterns of class distinction arise from the fact that...

Sir: How would it be if instead of repeating over and over again 'the Tories were brought down by the miners' (Jim Higgins, 12 November) and nonsense about living 'under a trade...

Sir: Mr Brian Cave's concern for the Forest of Dean (Letters 29 October) does nn t absolve him from checking the facts. The Ministry of Agriculture has nO responsibility,...

Much ado about something Raymond Carr Guernica, Guernica Herbert R. SouthWorth (California UP 215) Some events in history acquire a symbolic Significance out of all proportion...

Francis King Angela Thirkell: Portrait of a Lady Novelist Margot Strickland (Duckworth £5.95) On the first occasion that I met Angela Thirkell, she complained at length to me...

Mary Kenny Baby and Child Penelope Leach (Michael Joseph £6.95) A Child is Born Lennart Nilsson (Faber & Faber £2.95) Parenthood is a skill that is learned. In most tribes, it...

Geoffrey Wheatcroft The War Lords A. J. P. Taylor (Hamish Hamilton £5.95) Mr Taylor's new book consists of the transeripts of six lectures on the national leaders of the second...

Peter Ackroyd Tornado Pratt Paul Ableman (Gollanoz £4.95) People always want to discover 'the truth' about things; but if they were to find it, what would they do with it? The...

Benny Green The Book of Nonsense Edited by Paul Jennings (Macdonald 6.95) In marshalling the chronicles of nonsense it is as well for the anthologist to know exactly what he is...

Lohengrin and bear it Rodney Milnes Lohengrin (Covent Garden) Eugene One& (Kent Opera) The Marriage of Figaro (WNO) Most performances of Lohengrin are either badly staged,...

Deathly hate of the sexes Ted Whitehead The Father (Greenwich) Antony and Cleopatra (Old Vic) In Sweden in the 1860s a young couple v■talk in the birchwoods. They're in love...

Balance Clancy &gal Before Hindsight (The Other Cinema) Next to ectoplasm, 'journalistic balance' is probably the most invisible of elements. Personally I have never seen it,...

Contentious Richard Ingrams 1 am expecting any day now to receive the accolade of 'Defender of the Faith' from the Vatican, not that I really deserve it. It just seems to mc...

Bookbound Jeffrey Bernard One of my favourite cartoons of all time was a John Glashan one which appeared in Private Eye some five years ago. The drawing was almost irrelevant...